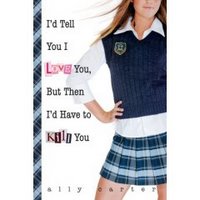 My full review of I'd Tell You I Love You, But Then I'd Have To Kill You by Ally Carter is in the March edition of The Edge of the Forest. Love You Kill You's release date is tomorrow; it's been optioned by Disney (and screenwriters have been hired).

Book Description (adapted from the publisher):

The Gallagher Academy for Exceptional Young Women is a fairly typical all-girls’
school -- that is, if every school taught advanced martial arts in PE, the
latest in chemical warfare in science; and students received extra credit for
breaking CIA codes computer class. So in truth, Gallagher Academy might claim to
be a school for geniuses -- but it’s really a school for spies. Cammie
Morgan is a second generation Gallagher Girl, and by her sophomore year she’s
already fluent in fourteen languages and capable of killing a man in seven
different ways (three of which involve a piece of uncooked spaghetti). But the
one thing the Gallagher Academy hasn’t prepared her for is what to do when she
falls for an ordinary boy who thinks she’s an ordinary girl.

It's been a couple of months since I read Love You, Kill You and the more I think about it the more I like it. And the more I read books that try to be smart, and funny, and sharp, with adventure and romance and real characters, and fail miserably, the more I appreciate the talent of writers like Ally Carter who make it look easy.

Something I liked but didn't mention in the review: the Gallagher Girls don't always get along. Sometimes they don't even like each other. But when they have to, the pull together. They are a team. And I love that this book bypasses the "mean girl" storyline; and in point of fact, I think it would be impossible to be a Mean Girl at the Gallagher Academy, because the girls have purpose; they are being challenged; they are recognized and celebrated for reasons other than looks. (Not that they don't like to dress up when they can.) And, of course, they could take over the country if they wanted to. Which they won't. Cause it's wrong.

hi!
I luv ur reviews!!! They're so well written! Are you an author by any chance?
Malvika

i think you should add the genre. cuz i want to know if it is a mystery or not. This is the best book ever and the 2nd one is even better!!!!!!