Anatomy of a Boyfriend 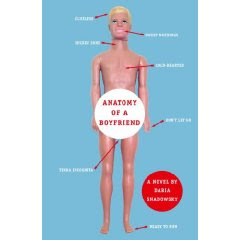 Anatomy of a Boyfriend by Daria Snadowsky. 2007. Copy supplied by author. Available in paperback September 2008.
The Plot: Dominique is 17, finishing her senior year, waiting to hear back from colleges, ready for her life to begin with college and then medical school. Then she meets Wes.... and things change.

There will be spoilers.

On the surface, this is a "my first boyfriend" book. As this, it is good -- Dom and Wes meet cute, there are semi dates, miscommunication, finally dating! And then the sex, and then college starts.

This book is deeper than "first boyfriend," and while it's told in first person by Dom, there is a lot that isn't told and is up to the reader to realize, figure out, or conclude. Some of it is stuff that Dom herself never quite realizes.

Let's start with the sex. This is a sexually explicit book, but in a technical sense, not in a steamy sense. When Dom and Wes sleep together, it's told in a very clinical, very responsible way. Both virgins, they even use condoms for oral sex. It's very true to Dom, as her favorite book is Grays Anatomy so of course she will speak in a matter of fact way. This answers questions that teens have about sex. And, while there is a friend who has a pregnancy scare, Dom herself suffers no bad consequences from having sex with her boyfriend. Her POV is she and Wes are in love, they have sex. They go to college, drift apart, break up, the end.

Me, as an adult reader of this, saw things a bit differently than Dom does. Dom tells this as a "first love" story; I see a "first lust" story. Dom is an overachiever who, having completed what needed to be done re getting into college, realized the next thing on her "to do" checklist was to have a boyfriend and have sex and so went after both. She's not as deliberate and knowing as I make it sound; but on a subconscious level, that is what she is doing. And the author lets the reader reach their own conclusions about whether this is a story of lust or love or a little of both.

Dom believes herself in love with Wes, but the relationship as she describes it is more lust and curiosity; more what she wants Wes to be than what he is. The use of a doll on the cover is perfect, because Dom doesn't tell us enough about Wes for us to see him as more than Her Boyfriend, that is, a doll. Whether Dom ever sees Wes as more than the boyfriend is up to the reader to decide.

I'm not saying Dom isn't emotionally invested in her relationship with Wes; she is. I'm just saying she is emotionally invested in having a relationship, and Wes happened to be the person who was available. He came along at the right time; he fit the Johnny Bravo suit. I respect what Dom is going thru; her emotions and actions, her trying to figure things out as, perhaps for the first time, she lets her feelings go and acts more than thinks. But, at the same time... had Dom met Les instead of Wes, it would have been the same book. She was ready for love; and Wes was who she found. It could have been Les, or Jack, or anyone else.

Dom and Wes do very little talking; a lot of IMs and emails, but very little real talking. To the point that Dom applies to Wes's college choice, even tho it is not hers, even tho it will be mega expensive, without ever saying to Wes, hey, I'm going to apply to your school so we can go to college together! This scene of miscommunication and assumptions and half spoken truths is pitch perfect.

A book about a first real relationship that is full of gray, of miscommunications and connections, of smart kids who cannot honestly say what they mean but who can connect physically -- I hesitate to call this a romance, because it is too real to be a romance.

When Dom's grandmother dies, Wes -- doesn't call. Doesn't visit. Doesn't go to the funeral. He's been dating her almost a year, sleeping with her half that time, should be her best friend by this point -- but because it's family turmoil and he's about to break up with her, does nothing. Had Wes really been in love with her -- and now, fallen out of love -- he would have still called. But, he didn't. Which reveals more about the truth of their relationship than any other scene in the book. (What's even better is that Dom thinks he is in the midst of finals in NYC, when really, he's been back home for days. So he truly is hiding from her.)

Dom has a grandmother; one of the most awesome grandmothers in a teen book. Why? Because the grandmother isn't awesome. Grandparents, in teen books, have a lot to live up to, usually. When they appear, they tend to quirky, supportive, artistic, with hidden depths for the teen to discover; or, being an unexpected ally against the world. Bonus points for being active and upbeat.

Dom's grandmother? Is a carping, negative, bitter woman, and this never changes. And when the grandmother dies, while Dom feels badly for her mother for losing her mother, she things, "oh well, she's not been happy or nice since grandpa died." Dom's breakup with Wes, that takes place during the same time, results in much more emotional turmoil than the death.

Which? Is awesome. Because it's true! Oh, it may not be nice to say, but not all grandparents are loving, kind, quirky, supportive, etc. etc. Some? Are not so nice. It's actually refreshing that there is no scene where the two connect, and that when she dies there isn't even a hint of Dom thinking "oh if only...."

About a third of this book takes place during college. Maybe it's because it was so hard to find books set in college when I was in high school and college, but every time I read a legit college setting I go "squeee! yay!!!". Money and scholarships figure in, with Dom's parents scrimping (not buying a house, driving an old car) to be able to afford college (and even then, she needs scholarships.) College isn't perfect, but is realistically told. In truth, I wanted more of the college scenes! Roommate issues, mean professors, hard classes, the first OMYGOD a C for a A plus student. Also, Dom gains the freshman fifteen, and this is also handled very matter of factly, with Dom not realizing it until some clothes don't fit as well.

So, who are your readers? Teens who are thinking about sex and love and boyfriends and college; looking for stories that are about them, or who they will be in a year or two. Looking for something real, without being overly dramatic. As for "the sex" which concerns some (especially Dartmouth students, see below) if a teen reads books where sex is all easy bliss, with no complications and happy ever after, then what's the big deal with reading a book where sex is shown in a more realistic light? Or if a teen is reading adult romance, why not teen romance? I don't believe teens read something and then want to act on it; they read because they have questions and are curious. And books can be a safe way to explore, to get answers. This is one of those books that give answers.

Dartmouth Review review
OK. I don't usually comment on links. And when, as with this book, there are a ton of links, I only include a handful. But I include this, from the Dartmouth Review, because it falls under the heading of "too smart for one's own good." Oh, Ivy League student, you may have parents who are richer than me, and may end up making more money than me, but I'll always be able to look at this and know you have no clue, with a side helping of pretension and a dessert of inability to research. Like the book, don't like the book. But criticizing Dom's putting Wes at the center of the world? Not really valid in terms of a book review.

Review the book you have; not the book you wish it would be. Does Dom or Wes act out of character? Criticize that. But a smart girl falling so hard for a guy and being in love and lust that her world now revolves around that guy? It happens. And the author relates that happening in a realistic manner. That you don't like it when girls do that is not the book's fault.

And Holy Hannah, why oh why do you think this is an elementary school book? Pre teen readers? Hardly! Who told you that? You cite Bobbsey Twins as a YA book to be read instead of this? Your ignorance of YA literature is neither cute nor a sign of intellect. It does nothing but show how you've fallen for the urban legend that all YA books are actually for ten year olds. And, accordingly, makes you look as foolish as the person who thinks someone in Nigeria is giving them a million dollars. It's a review that tells more about how smart the reviewer thinks she (or he) is, than the book itself.
at September 03, 2008

Email ThisBlogThis!Share to TwitterShare to FacebookShare to Pinterest
Labels: books for older teens, reviews, romance, YA

I actually felt uncomfortable while reading this book - but I mean this in a very positive way! I found it all so REAL.

I love your insights on Dom being emotionally invested in having a relationship and that relationship being a lot about "first lust"!

I'm not as down on the Dartmouth review as you are, but I haven't read the book yet. Is Hannah's complaint that the book reads like something for second graders, only with content for older teens, valid? I've seen this in other books- sort of like hi-low books gone wrong--where the age range of the writing style seems to be at odds with the content.

Anyway, I'll pass on the book. It seems like a very successful attempt to carry Judy Blume forward six or eight years. I belong to that minority that never appreciated Judy Blume when we supposed to. I think Hannah belongs, too.

The reviewer is very inaccurate about the reading level of the book. It's not Hi Lo; and it is not marketed as such.

Like the book, don't like the book. Like Judy Blume, don't like it. Great individual reactions; but a review is supposed to be more than an individual's own reaction to a book; and it is also supposed to know what is a 2nd grade book and who the audience is for a YA book. And that is where the Dartmouth review fails.