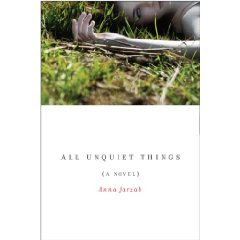 The Plot: It's been a year since Neily's ex-girlfriend Carly was murdered. One year; and now that senior year has started, it should be behind him. Someone was arrested, a trial was held, the murderer is in jail. Neily is still conflicted about his feelings about Carly, their time together, their breakup, her murder, so when Carly's cousin Audrey approaches him with her belief that the real murderer is still out there, he's not sure what to do.

Sometimes Neily tells the story; sometimes, Audrey. With both, the story switches from the present, senior year, to the past, when Neily, Carly, and Audrey first met. Neily tells a sweet, tender story of meeting his best friend, Carly, in 8th grade on his first day at private school, and how that friendship became one of two young teens in love and then unraveled so disastrously that the entire school witnessed their break up as Carly moved on to becoming friends with the edgy, popular, social, cool kids.

There is the mystery of Carly's murder, but also the mystery of shifting friendships and loves and personalities in high school. Why is a good girl attracted to the bad boy? What does an endless party scene offer that quiet days of reading books does not?

As with any mystery, for me to tell details about the crime -- the murder of Carly -- would result in the reader not having the pleasure of discovering it themselves.

What I will say: Like Brick and Veronica Mars

Jarzab does something that is quite daring for a book: she makes characters unlikable. There is no "OMG I LUV THIS PERSON," a reaction that is sometimes seen on blogs (and, truth be told, I've done it, too.) Neily can come across as a bit of prude, and yes, a bit stalkerish and obsessed about Carly. Carly cruelly hurts Neily. Audrey brings Carly into the cool, dangerous crowd. And yet, it is because they each are at times unlikeable that the book is so strong. They are not perfect; they are human; they have failings. Failings that we all have, every day, yet we aren't murdered; our friends aren't murdered. It makes Neily, Carly and Audrey identifiable, perhaps uncomfortably so. Would I want to be friends with Neily, Carly, Audrey? The more honest question is, at times, have I been Neily, Carly, Audrey? The answer is yes.

And, wow, the writing! All Unquiet Things works beautifully as a mystery; but it is also a very strong literary work. The writing is beautiful; but it never overwhelms the story. (My pet peeve with many a literary book is that the writing trumps the plot and characterization; here, it supports it, as it should). I want to copy paragraph after paragraph!

Here, from the first few pages: "I didn't know what help spending time at the bridge [where Carly died] would be, but I had been drawn there throughout that boiling summer, and I thought it best to go with my instincts, even though they never seemed to do me any good."

And this: "Carly had been smart, the brightest girl in our class. But she had also been reckless and damaged and lost, and the people she trusted to fix all of those problems had only made them worse. ... I would say that Carly fell in with the wrong crowd, but the truth is that there was no falling, no tumbling, no deceit on the part of the wrong crowd involved. Carly sought them out." Oh, just go to the author's website and read the excerpts for yourself.

Added to my "Favorite Books Read in 2010." Either click the tag or look at the sidebar to see my other 2010 favorites. I'm sure this will be nominated for BBYA, and when Printz and Morris buzz starts, this should be included on the short lists everyone is talking about.

So glad to hear such a glowing review. A few book bloggers haven't liked this one, and it's the next audiobook I'm listening to. Can't wait to see if I like it!

I think this will work very well as an audiobook, so please let me know if it does!

The flashbacks are clearly marked in the text (ie, Junior Year) so that shouldn't be confusing.

Is it one or two narrators? Because sometimes Neily is telling the story, sometimes Audrey.

I'm with you - I loved this book! (My own review will be on my blog tomorrow.) I've been recommending it to adults who don't normally like YA.

Carrie, I agree that this book is a perfect crossover title for adults. I just gave it to my mom to read (with strict instructions to return it to me as I'm keeping this one!)

This sounds intriguing. Of course, I have to ask: Is it appropriate for general middle school consumption? I've been hoping to add more books of literary quality to my collection, but as a middle school librarian, I always worry about sexual content, foul language, graphic violence, etc.

Alicia: To be honest, I didn't read it thinking of middle school. It's a "yes" for high school.

For middle school? For the mature 8th grader? Arg. I think it falls under mature content (ie, understanding why Carly decided to pursue and hang out with the bad kids, plus the murder) but not explicitly so. The murder is not graphic; there is sex, and a sexual assault, but it's not graphicly depicted (i.e, saying someone slept with someone rather than paragraphs of description); there is drug use, but more that its stated than is shown explicitly. I am drawing a total blank on language, which means it is either not there or makes total sense in the context (for example, perhaps in yelling at a suspected murderer). OK, just flipped to one of the confronting possible suspect and yes, the f word is used.

Great review. I hadn't heard about this so have now added it to my list and will look forward to reading.

I am reading it now and really enjoying it! I wholeheartedly agree that the writing is amazing. It's refreshing to read a YA book that doesn't feel "dumbed down" for kids. It is smart without being pretentious. I am savoring every minute of this one. So far this is my favorite debut author of 2010.

I'm putting it on my tbr list-you make it sound very worthy!!

Yes, I agree with PR above--your review is very compelling! What you said about the author making the characters ulikable, yet it works--many readers have said that about Courtney Summers' books, too (excellent, by the way).

CLM & Peaceful Reader, looking forward to hearing what you all think.

Danette. at some point I'm going to do a longer post about unlikable characters and books; about when it works and when it doesn't, and reader expectations. I'll add Courtney's books to my TBR pile.

As I was reading your review, I was thinking, excitedly, "Oooo, sounds like VERONICA MARS." And then you mentioned VM...! I will definitely add this to my "TBR" list.

I agree with practically everything you wrote about All Unquiet Things, but for some reason, it didn't completely work for me. Really well-written, but left me feeling rather indifferent.

But I second the Courtney Summers rec.

This is one of my favorites of 2010 also. I found Neily and Audrey to be more likeable than Carly but I agree with you that all three had flaws. Excellent review.

Liz, you brought this book to my attention and I finally got to read it. Excellent mystery! Read it in one day and agree with everything you said. Thanks for the recommendation!