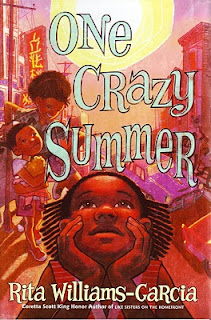 by Rita Williams-Garcia. Amistad, an imprint of Harper Collins. 2010. Reviewed from ARC from publisher.

The Plot: 1968. Delphine Gaither, 11, is the oldest sister, the responsible one, who is in charge of Vonetta (age 9) and Fern (age 7) as they travel from Brooklyn to Oakland, CA to visit Cecile, the mother who left them shortly after Fern's birth.

In One Crazy Summer, the three girls learn not just about their mother and about themselves, but also about the larger world. The world of 1968 is one where grown ups argue with children about whether they use the word black or colored; a seven year old is taken to task in public for having a white doll; and poetry is not just words on a page.

Williams-Garcia brings 1968 alive. Take this passage about the girls and how they watch TV, where they look "to find colored people on television. Each week, Jet magazine pointed out all the shows with colored people. My sisters and I became expert colored counters. We had it down to a science. Not only did we count how many colored people were on TV, we also counted the number of words the actors were given to say. For instance, it was easy to count the number of words the Negro engineer on Mission Impossible spoke as well as the black POW on Hogan's Heroes."

The words are those used at the time (colored, black, Negro); the story involves something (television) that today's kid can relate to; and it shows how few people of color were on TV and how they were utilized in those programs. All entertaining; yet also informational. Most importantly, it conveys something about 1968 and about these three girls. Cecile may be the parent who is now a poet, who works with the Black Panthers. Grandmother "Big Ma" and their father have raised them to think how "they" will look at you, to "make sure they don't misbehave or be an embarrassment to the Negro race." Big Ma and Papa have also taught them pride and taught them to judge the world they are in.

Because the girls are visiting an unknown mother, they serve as "outsiders" to the world they encounter, where the Black Panthers at the People's Center provide free breakfast and summer camp. Oh, they have some knowledge, of course, just not the day-to-day life experience. So, too, the reader is introduced to the Black Panthers.

Cecile. Cecile is not a dream mother out of a book. There is the whole abandoning her daughters; even when the girls arrive for a month's stay, Cecile continues to act as if she doesn't want them around and doesn't care about them. Let me add, how much I love their father who took the chance and risk of sending these girls to be with the woman who left him. I love nuanced portrayals of adults, especially those who don't fit society's norms. Like Delphine and her sisters, the reader is at times angry, confused, and hurt by Cecile's actions and words. And yet... and yet... Cecile is never a monster, never evil.

Cecile, seeing how Delphine assumes responsibility for her siblings, tells her "it wouldn't kill you to be selfish, Delphine." How non-motherly! Yet, how right. How true. While Cecile may have taken selfish to the extreme, some selfishness is a good thing.

It takes Delphine another hundred pages to angrily respond to her mother, "I'm only eleven years old, and I do everything. I have to because you're not there to do it. I'm only eleven years old, but I do the best I can. I don't just up and leave." It takes those pages, that time, for Delphine to find her voice, to finally have enough trust in herself and her mother that she can say these words to her mother and keep her mother. Oh, not as a mother out of a book or TV show or like Big Ma; but a mother just the same.

While teachers and librarians will be happy about a book set in 1968 with the Black Panthers, its not what kids usually go looking for on their own. Oh, there will be some kids who know something about Black Panthers and want books; and there are always those of us who even as children were historical fiction fans and sought that genre out.

How to sell to those kids who aren't into historical fiction?

Booktalk it as a great story about three sisters, with a bookish oldest sister, a show off younger sister, and a baby sister. Imagine going to visit a mother you haven't seen since you were four... and having your mother not hug and kiss you but send you out on your own in a strange neighborhood to buy dinner for the whole family! Fans of sister-books will love this new addition to the genre and (like me) will hope for a second book. Like other books about sisters, this is episodic: meeting Cecile, Delphine cooking for her sisters, sight seeing.

This is going on my favorite books read in 2010 list (see sidebar for full list). My only problem with this book? I'm not satisfied. I want a second book. I want to spend more time with the Gaither sisters. I want One Crazy Summer to be the start of a new series, like All Of A Kind Family / Betsy-Tacy / Little House on the Prairie.

Liz, I'm thrilled with your review! You'll be happy to know that Rita will be writing a sequel to ONE CRAZY SUMMER, once she finishes her current manuscript.

I am so happy to hear that.