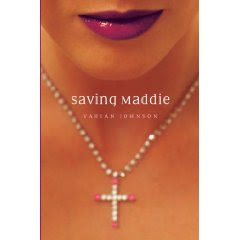 by Varian Johnson. Delacorte Books for Young Readers, an imprint of Random House. March 2010. Reviewed from ARC from author.

The Plot: Joshua Wynn is a perfect seventeen year old, just like his parents want. He's the role model, the evidence of his parents goodness. He's the son of Rev. Isaiah P. Wynn, with all that demands. Then Maddie comes to town; his friend from childhood, another preacher's kid, but instead of being a good kid (like Joshua) she is the wild child people whisper about. Joshua begins to question what it means to be good; what it means to be a role model; and what goodness really means.

The Good: Maddie is a year older than Joshua. Where Joshua complied, was compliant, has gone along with his parents dreams, wishes, expectations, Maddie has questioned and rebelled. Joshua is a the teenaged boy not invited to parties because his friends cannot relax and be themselves around him, hesitant to drink or smoke or flirt around him. Maddie drinks and smokes and has had sex; she's not a good girl. But does that mean she's a bad girl? Does that mean she's beyond saving? Does she need to be saved?

Johnson explores issues spiritual issues -- of belief, spirituality, religion. Of how hard it is to practice what one preaches, and what exactly does that mean. And he does so in a way that respects both sides of the coin: Joshua's path and Maddie's path. Joshua realizes his parents aren't perfect, aren't always right; and this frees him, to start to be his own man.

Joshua as the perfect teenage son of the preacher is a virgin. There there are books out there about teenagers and sex and sexuality and purity and "staying pure" they are usually told from the girls point of view. Saving Maddie has the same questions and struggles and examination of choices from the point of view of a teenaged boy, who has hormones and feelings and emotions but also has the value system of his parents.

I don't want to go to much into what Joshua ends up doing, or not doing. Can he save Maddie? Is it fair to him, to Maddie, to ask that? Does Maddie need to be saved? And are the only two choices open to Joshua to be either the dutiful son or the rebel?

I love YAs that tackle religion - and from a boy's POV! This is definitely one to read. Thanks!

Wow! That sounds like a must-read for me. I have never heard about this book before. Thank you for sharing your review. I will add it to my TBR list.

I love the cover too! Very eye catching.

I can't wait to read this! Thank you for such an interesting review.

I'm looking forward to reading this one. My stepdad was a preacher's kid, so it's an intriguing premise for me...