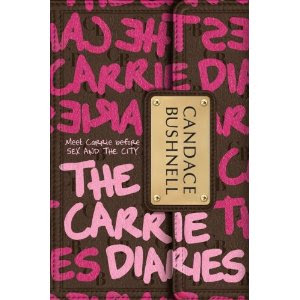 What her father wants for her: to go to nearby Brown, his alma mater. And to be a scientist.

And there's also Sebastian Kydd. The new boy in school.

Carrie wants Sebastian. And wants to be a good friend to her friends, whatever that means. She wants to make herself happy without disappointing her family and friends.

Most of all, Carrie wants to find out who she is. And to become the Carrie Bradshaw she is meant to be.

I loved, loved, loved this book. Yes, in part because I am a fan of both the book Sex and the City

and the HBO series Sex and the City

, which feature a thirtysomething Carrie Bradshaw. I loved this book because it works as a classic coming of age story, with Carrie figuring out her world and her place in it; with that world including expanding her horizons beyond her small town. Carrie works on being a writer and what that means. As the book starts, Carrie has been rejected for a summer writing program in New York City. She is at first reluctant to join the school newspaper (it's not her type of writing); she does not become an investigative journalist, rather, (spoiler!!!) she starts looking at herself and her friends and foes as source material, providing biting (and anonymous) commentary on high school.

Sorry about that spoiler. But this is a prequel of sorts, to both the book and film Carrie, so the reader "knows" where Carrie will end up, at least in fifteen odd years. The question isn't whether Carrie become a writer living in New York City; the question is how that happens. And while there is romance, sex, and love in The Carrie Diaries, this is equally about becoming an artist, finding a voice, and discovering what is, and isn't, important.

There is romance in the book: Carrie falls for new kid Sebastian Kydd, handsome with a reputation. A typical enough story for a young adult book. What happens (and doesn't happen) with Sebastian, as well as the dating lives of her friends (Mouse, Lali, Maggie, Walt), forms the basic plot of The Carrie Diaries. Along the way, Carrie observes (she is a writer, after all) -- and while love, lust, and social interactions figure in, this is not a "romance." It's about relationships, and what people want (and don't want), and how they treat others to get what they want. While set in the 1980s (being a high school graduate in 1984, I peg Carrie as graduating a few years before me based on the Hustle still being danced), the relationships in The Carrie Diaries are not dated. What is more important: a boyfriend or a friend? What would one do to keep a boy?

Sex and The City was based on Bushnell's columns, and (as I am reminded by Salon) begins as vignettes featuring a variety of women and ends with Carrie telling her story in her first person. The Carrie Diaries is told in first person by Carrie herself and is a straightforward novel. Is it the book or TV show Carrie? The book; and those who loved the TV show would do well not to think "but wait, Carrie never mentioned a sister!" or to otherwise try to reconcile HBO-Carrie with book-Carrie. Still, it's hard not to picture a teen Sarah Jessica Parker as young Carrie and to not hear Parker's voice while reading the novel; it's hard not to imagine the Carrie who ended up with Mr. Big, rather than the book-Mr. Big who never evolved. Which is fine -- just don't go trying to reconcile the two Carrie storylines (as Salon did recently). Bushnell is not a writer hired to give a prequel to a popular TV series; she is a writer who is exploring the origins of her own creation (and, some say, herself).

"Will teens want to read this?" Isn't that the elephant in the room? Is the audience me, or today's teen?

Both. Those who enjoyed the book and/or TV show will love this early glimpse of a teenage Carrie who lives in the suburbs, is a feminist, doesn't want marriage or kids but wants to write and live in the city. A second book is promised; and while The Carrie Diaries is set firmly in suburbia, the next book promises to be about Carrie and "The City." I cannot wait!

For those who know nothing of Carrie Bradshaw, from either book or TV? My answer is the Duggars and the Amish won't be interested in reading this book, anyway. No, seriously. Thanks to the TV show and movies, most teens, while not readers or viewers of thirtysomething Carrie, are aware of who Carrie Bradshaw is thanks to pop culture and the media. They know that she is a fab person living a fab life in a fab city; and this book shows them that the dream of writing, of moving out of the suburbs, is a dream that anyone can pursue and obtain. At the same time, they will recognize themselves and their friends in Carrie's high school world.

Why the 1980s? Blog readers know I always ask, "why did the author set this during their own high school years rather than today?" The reason why is obvious; for this to be a true prequel, it has to be set about fifteen years before the book/TV show, which is the 1990s. The relationship issues of Carrie and company (friends, family, romance), Carrie's desire to be a writer, parental expectations, are all still relevant. There aren't cell phones, of course; and there is a lot of drinking (the drinking age in Connecticut was younger than today's 21) and smoking (remember when it was allowed? my freshman year at high school there was still a smoking area for seniors) and some period references such as The Hustle. They are just enough to give flavor to Carrie's world, but they don't overwhelm the reader with a history lesson.

But the sex! You want to know about the sex because this is about a character first featured in SEX and The City. See me doing an eye roll? Why is it always SEX you ask about?

Carrie is a senior in high school. There is drinking and smoking. Yet all you want to know about is the sex. What if I say that the story lines are going to appeal to older readers (what do I want out of my life? what is my life outside of high school? what do I do when friendships with my BFFs change)? Sigh. You still want to know about the sex.

OK, OK; there is talk of sex; and there is sex (but I'm not going to tell you who has sex, no spoilers from me!); and there is talk of birth control; but it is not explicit. Frankly, there are a lot more explicit young adult books out there; what The Carrie Diaries provides is not graphic scenes, but rather a smart girl figuring out what she wants and doesn't want and when and why -- and that includes sex, and includes looking at the sex lives of her friends. Honestly, though, I prefer to use the word "relationships" to "sex," because it's not about the sex. It's about figuring out yourself, and your friends, and your boy/girlfriend, and how it all fits together.

One last thing. I loved Carrie's family! Her father and her sisters were so realistically drawn that I could easily picture them and I'm worried what will happen with them, especially once Carrie pursues her own life. Who takes care of her sisters? What will her father do once he realizes Carrie isn't going to be a scientist?

re to Amazon and buy something, I receive a percentage of the purchase price.

I *really* enjoyed this as well!

Thanks for this review. I had vaguely heard about it, but it was good to get some details. I'm not sure whether I'll read it, but now I'm sure I wouldn't regret it if I did.

I was never a huge SATC fan..... but I think you just might've convinced me to check out this book.

I'm a huge SATC fan; I've been experiencing a high level of withdrawl since the show has been off. I can't wait to get my hands on a copy of this book!

It was a lot of fun -- I'm going to pass it along to my cousin (who is a fan of Candace Bushnell but she doesn't usually read YA) and get her feedback, also.

I watched the show off and on, and saw the movie. I thought the article about how the book didn't follow the show was so annoying. The book came first! But I think it does look fun and I'm sure I'll pick it up.

Oh goody! I'm so glad to hear it is not a disappointment. I'll check it out for sure, now!

This book is obviously not for me -I read three sentences of this review and thought "This is wrong -Carrie's father left when she was a child..." Reading about Carrie Bradshaw now without automatically connecting it with the show is impossible.

Okay, I wasn't sure I wanted to read this, but based on your review I'm putting it on my list.