It's not yet August, but I can't wait to say how much I loved Amity. 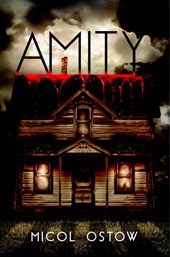 Amity is about a haunted house; a house that is both haunted and that haunts its unfortunate inhabitants. It is told by two seventeen year olds, Connor and Gwen. Both have just moved into a new house. It is the same house, ten years apart. And both see what those around them cannot, or will not: that there is something wrong and dangerous about Amity.

Reader, it scared the hell out of me.

The title, Amity, refers to another story about a haunted house, The Amityville Horror. But rest assured: the reader doesn't have to know anything about that (maybe) true story. The setting has changed, from Long Island to New England. Amity is the name of the house itself, not the town. It's isolated, not in the middle of a town.

What hasn't changed? The house is haunted. There are things, some small, some less so, that those who have read about The Amityville Horror

will recognize. Recognizing them may be fun -- if "fun" can be used about a house that drives its inhabitants to kill -- but not realizing that they are references to the (probably not) true story doesn't take away from the story. A reader can happily read Amity with no knowledge whatsoever about the Amityville Horror -- well, as "happily" one can be reading with growing dread and worry, knowing that something bad is going to happen to the inhabitants of Amity.

Yes, it's months away -- but trust me. Your lovers of horror will not be disappointed.

Now that Ostow has told modern versions of Charles Manson and the Amityville Horror, what next? Me, I'm hoping for her to turn her attentions to Jonestown. I still have nightmares about that one.

Review: Far From You

by Tess Sharpe. Hyperion, an imprint of Disney Book Group. 2014. Reviewed from ARC.

The Plot: When Sophie's best friend, Mina, is murdered, Sophie is blamed.

No one thinks Sophie killed Mina, but they think it's Sophie's fault that Mina is dead. The police, her friends, her family, Mina's family, all believe that Sophie took Mina to a drug deal; something went wrong; and Mina ended up shot.

It's true that Sophie has a history with drugs, and with lying, so no one believes the truth: that it was Mina who wanted to be in the woods that night, that Sophie was going with Mina, that a masked man shot Mina.

Sophie was forced into rehab, even though she was already clean. Now she's back home, and she's determined to find who killed Mina, and why.

The Good: I love a good mystery! And I love an author who understands that a character's backstory isn't just words on a page; rather, it's there to be motivation, to be explanation, to be a present part of the story.

Yesterday, I wrote Why It Matters: BookCon.

I want to highlight the We Need Diverse Books Campaign (which I didn't see yesterday until after I had posted.) A quick recap of what is explained fully in that post:

"On May 1st at 1pm (EST), there will be a public call for action that will spread over 3 days. We’re starting with a visual social media campaign using the hashtag #WeNeedDiverseBooks. . . .  We want people to tweet, Tumblr, Instagram, Facebook, blog, and post anywhere they can to help make the hashtag go viral. For the visual part of the campaign: Take a photo holding a sign that says “We need diverse books because ___________________________.”" I am trying to decide what my sign will say.

"On May 2nd, the second part of our campaign will roll out with a Twitter chat scheduled for 2pm (EST) using the same hashtag." (I'll be at work, so I'll be taking a super late lunch to participate from 2 to 2:30).

"On May 3rd, 2pm (EST), the third portion of our campaign will begin. There will be a Diversify Your Shelves initiative to encourage people to put their money where their mouth is and buy diverse books and take photos of them."

My approach to diverse books is, needless to say, formed by who I am (white, cisgender, late 40s, female) and what I do (librarian, reader, reviewer.) I know I need to listen. But, I also need to know when, and how, to speak up.

So, here's part of my reality. I don't think readers should be shamed or shoulded into reading books they don't want to read. For me, the prime reason a reader reads is because they want to read that book. The reasons for that want vary.

How do diverse books figure into this? Including diverse books in the suggestions and recommendations that meet that "want." Because, frankly, I am over the belief some people hold that diverse books will always be "other" and not meet their "want." That belief? It's not shaming or shoulding to point out how troubling that belief is; and to do so in a constructive way by saying, here are the books that meet your reading needs.

Part of that belief springs from something I wrote about yesterday: the myth that white is the default that everyone can identify with, but that the opposite is not true. That someone who is white cannot identify with a main character who is not white. Which is bull. And it's a belief that needs to be countered, loudly, and fought, loudly.

Why It Matters: BookCon

As has been reported at BookRiot, BookCon -- the Saturday of BookExpo, geared towards readers -- has announced a number of guest authors that have one thing in common: they are all white.

As Rebecca Joines Schinsky writes, "First came the report that one of BookCon’s main features, a panel of the rock stars of kid lit, was comprised entirely of white male writers. . . .Then this morning, after Entertainment Weekly announced that John Green will also speak at BookCon, the people of Twitter went looking for the entire BookCon line-up. Lo and behold, it also has a remarkable diversity problem. As in: there is none."

Why does the make up of the authors at BookCon -- or, for that matter, at any event -- matter?

Here's something I learned early on, when putting together booklists and displays. It's something I think most people who assemble lists or organize events figure out pretty early on: check yourself and your work product. Make sure what you've put together is balanced, a true representation. In other words, if you sit back and see something is all white, or all male, or -- you get the picture -- you need to go back and do it again.

Why does it matter?

It matters because it looks like the message sent here is that the only authors who will get readers to buy tickets are white authors. And I refuse to believe that.

It matters because it looks like the default setting in reading is white. And while I reluctantly acknowledge that is true for some, I think those of us involved in the reading world need to push back against it. And one of those ways is not presenting all white booklists and panelists.

It matters because panels sell books. As someone who has had the good fortune to attend many a book event over the past several years -- from small to big -- I can attest that an author being on a panel makes me want to read their book. So the exposure by being on a panel? It matters.

This isn't asking for popular, well-known authors to step down. This isn't about not having popular authors. It's about everyone being aware and doing what they can. So, yes, it's on the organizers to look at who they are inviting.. And it's on the publishers to look at who they are promoting and sending to events, so that some authors go because their publishers pay and others can only go if they have the money to pay their own expenses. And it's on the authors to ask about who else is on their panels. And yes, it's on readers to be aware and attend those events that reflect the diverse world we live in.

Diversity isn't someone else's problem. It's not pointing fingers at others. It's looking in the mirror and seeing our role in the problem. And doing something about it.

I'm pleased to welcome you here!

For the past few years, Tea Cozy was hosted at School Library Journal. 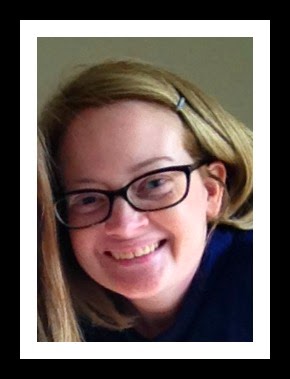