It's from this year's birthday present to me: I did a pinup photo shoot at Vavoom Pinups in Chicago.

Vavoom Pinups is about "empowering vintage photography" and I can say that description? Is totally, a thousand percent true.

I had heard about Vavoom Pinups from friends; I was wanting to do something for me. And I was thinking about my younger self, and how sometimes I just wanted to go back in time and say you look amazing, you're not fat, wear that bikini. And I can't go back in time, but I wondered, twenty years from now am I going to be saying the same thing? So forget the self doubt and all that.... and get my picture taken.

I recommend the experience to anyone! It began with hair and makeup, and wow, it takes a while to look that good. No, seriously -- I had no clue that it would take as long as it did. I loved the results.

Here are the results: 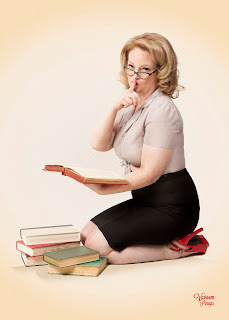 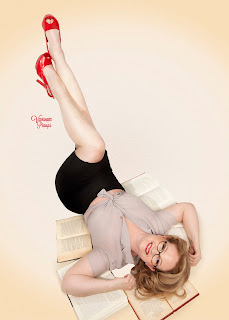 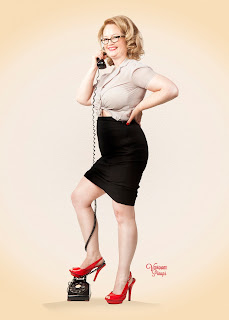 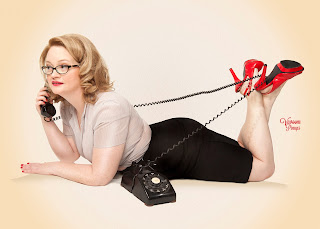 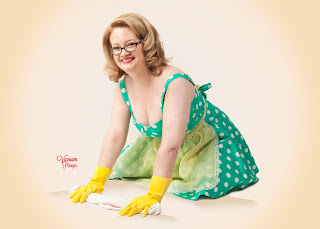 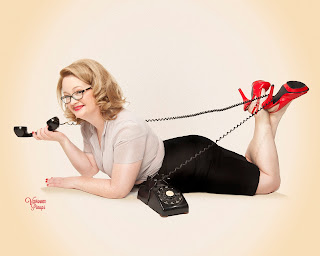 One of the reasons the photo shoot was so fun was I didn't do it alone. Kelly Jensen of Book Riot and Stacked also got her photos taken -- and we had some taken together. It was a blast. 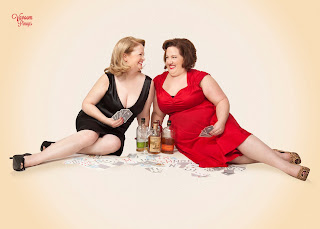 It was so much fun, and it showed, that Vavoom Pinups used one of the photos on their Facebook and Instagram. 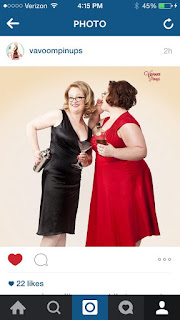 Since I did this for my birthday, it only seems right to post about it on my actual birthday.

This was my extravagant gift to myself: and I have no regrets. I love the photos; and I love the experience; and I can't wait until I'm in Chicago again and can do it again.

Email ThisBlogThis!Share to TwitterShare to FacebookShare to Pinterest
Labels: Vavoom

Review: The Trouble With Harry

The Trouble With Harry

The Plot: Regency England. Lord Harry Rosse thought he'd faced danger as a spy. But that he could handle... what he can't handle is life, now, raising five children alone. What he needs, what he wants, is a wife: someone to love his children, with all their antics and high spirits. Such high spirits he sometimes hides from them...

A wife for company and companionship. Not one of those pretty young things only interested in his title and status, eager for children of her own.

So he places an ad for a wife, leaving out a few details. Like the children. And the title. Or his past as a spy.

Plum sees the advertisement for a wife and thinks its the answer. All she wants is a decent man; the chance to have a child of her own; someone who will be kind to her the niece she's raised; and someone she can respect. She doesn't deliberately leave out details -- like her disastrous elopement twenty years ago, to a man who already had a wife. (She didn't know!! He lied!) Or that book she wrote under an assumed name, the book that helped support her when her family and friends and society shunned her for her involvement with a married man.

The Good: The Trouble with Harry was a lot of fun: it's like a sexytimes Nanny McPhee. The children are terrible, and cause so much problems. I kept giggling as I read it.

This is one of the titles recommended back when I asked about books featuring those 40 and over: Plum is 40, Harry is 45. Each are hiding secrets, and those secrets come create problems for them. But what I liked is that despite those secrets they are keeping from each other, they are honest with each other in what matters: their emotions and their feelings. Both are also frank about their attraction and physical needs and desire for each other. Perhaps more than frank -- let's just say that the book Plum wrote isn't some Jane Austen or Bronte inspired work of art.

Because both are older, Harry and Plum are for the most part secure in who they are. They don't have unrealistic expectations of each other; Harry particularly doesn't want some young wife full of romantic dreams. But that earned dose of reality is what makes their relationship and growing love so romantic and meaningful.

So, thank you very much for the recommendation, and I look forward to reading the others in this series!

The Plot: Veronica Chandler is "Dear Veronica" for the Jackson, Wyoming local paper, the voice of wisdom offering funny and on-target advice for young and old, on everything from family relationships to sex.

The thing is, she's hiding something -- she feels like a big fake. Yes, she has common sense, a sense of humor, the research skills and writing skills that make "Dear Veronica" such a success. What she doesn't have, well, is the real-life experience everyone thinks she has.

Gabe MacKenzie is the hot new guy in town. He's the new librarian, and while he's originally from New York City he's not a big-city guy. He loves that his new job allows him plenty of time for rock-climbing and hiking. He doesn't love that it's only for a year: family obligations are pulling him back to New York. He's not looking for anything long term or anything serious. And then he meets Veronica.

The Good: This is the most recent book in Dahl's Girls' Night Out series, and it's the third in that series to feature a librarian. Since it's set in a small town (well, small when it's not tourist season) it makes sense that the library is an important place in the lives of the members of the small town.

Familiar characters from the other books make appearances, but this story is all Veronica's. There are many, many things I enjoy about Dahl's books and this one doesn't disappoint. The characters are interesting, real, and complex. Veronica isn't a virgin for reasons of religion, morality, or desire -- it's just that her timing has never been right. In high school and college she was concentrating on grades so that she could get a job in NYC; and then NYC let her down. She returned home to discover that what she wanted in life was what her home town had to offer.

And the sexytimes are terrific, as well as what leads up to it -- Veronica revealing her big secret to Gabe is one of my favorite scenes.

Gabe, as I said, is in Wyoming for a year; Veronica doesn't know that, and I like that the tension between the two of them was Gabe keeping this secret from her. And that his motivations for this were explored -- how his desire to be a "nice guy" by not bringing up a possible conflict was itself problematic. That "protecting" someone by not mentioning something was not protecting at all.

Also good were both Gabe's and Veronica's family situations. As I said, Gabe's family is the reason he has to return to NYC and his situation was believable and sympathetic with a good resolution. Veronica's father is a gruff, distant, and demanding man -- I need to go back and reread Flirting with Disaster (Jackson: Girls' Night Out Book 2)

to remind myself of how others saw and interpreted these two. While at times I wanted to throw things at him, I found his actions, and his daughter's reactions, realistic.

Bottom line: It's Victoria Dahl. If you haven't read her books, start now, and honestly you can start anywhere with any title. The books may be interconnected but they are not dependent on each other. The only problem you'll have is the problem I face: the desire to read them all at once balanced against wanting there to always be a new-to-me Dahl book around when I need one.

What else? It's a Favorite Book of 2015, needless to say. And under "readalikes" I think this one may work for New Adult readers. While Victoria is older than most NA heroines, she is negotiating those things that NA is about: trying to establish her career, not sure what to do about career or life, trying to get independence, and love and sex. It's just, for reasons, those things happen a bit later for her; and, again for reasons, people looking at her think she has her act together when she hasn't. Or, rather, she thinks she doesn't have her act together. 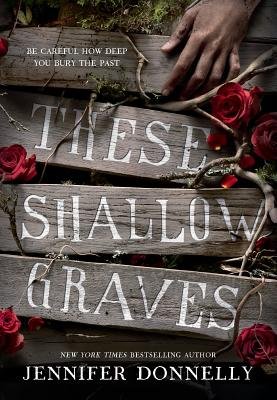 In 1890's New York City, Josephine Montfort has everything: she's young, she's rich, her parents adore her, she has good friends. Soon, she'll be engaged to the handsome and rich young man who has been a good friend since childhood. She wants to be a reporter, like Nelly Bly, and puts together the school paper.

All that changes when her father is found dead in his locked study, a gun in his hand. An accident.

Jo can't understand how the accident happened....she does what a proper young lady should not do.

She asks questions. Searching for answers leads her out of her protected, cossetted world, into the rough and tumble streets of New York, the world she's been protected from. A world of shallow graves.

Yes, put this on your radar -- it's a great mystery, but it's also a great look at female roles and expectations, and sexism, and how people can be too protected.

Sometimes, I'm reading for outside reasons (right now,  I'm reading YA for the Edwards Award, and New Adult for various articles and webinars) - and sometimes I read for me.

Don't get me wrong, I love YA and New Adult, but the truth is, I like to mix up what I'm reading. And after months reading about teens or young twentysomethings, I want a change -- I want to read about characters that, well, are closer to my age. (This desire is one of the reasons I'm sympathetic to the reader-driven aspect of New Adult, of people wanting to read about those in their own age group.)

So that's the long introduction to me asking you for recommendations.

I want romances featuring women over forty. I prefer contemporary or historical.

Last year, via twitter, I asked for older women/younger men recommendations, leading me to Victoria Dahl. (Alas, I didn't keep that list here -- it's lost in a old tweets.) I'm reading my way through all her books, but the one that introduced me to her was Bad Boys Do

(older woman/younger man, with the woman in her mid-30s). Dahl's newest series starts with a novella (Fanning the Flames: A Girls' Night Out novella

) featuring two forty-somethings (a librarian and a firefighter.)

I also began my over-40 request on twitter Sunday morning, and got the following recommendations. Please chime in with your opinions on these titles or other suggestions!

The Trouble With Harry

Apples Should Be Red

Any other suggestions? Thanks!