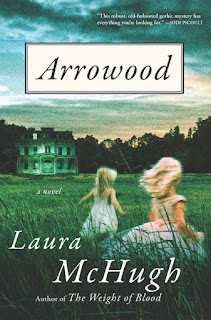 The Plot: Arden Arrowood is returning to her hometown after twenty years away.

Twenty years ago, while she babysitting her twin toddler sisters, she stepped away from a moment -- and they vanished.

Before: Arden and her sisters and their parents and their grandparents, in the big family house in Keokuk on the Mississippi River. Picturesque and perfect.

After: it all falls apart. First Arden's parents leave Keokuk, moving from place to place until they divorce and each builds a new, different life. Arden drifts, in her own way, unable to finish her graduate degree, unable to commit to anything permanent.

Now: Arden's father has died, and she inherits the family home. The home that was the last place she saw her sisters. Arden returns, for many reasons. Because she has no place else to go. Because once it was home, and no matter where she has lived, it's never been home. And maybe, just maybe, the mystery of the twins can be solved.

The Good: I love a gothic mystery, and this is a present-day, present-time gothic mystery. Arrowood takes and twists and updates these elements.

Instead of a castle, there is the old family home, where generations of Arrowood's lived before Arden and her parents and her grandparents. And it's a big home, almost abandoned in the years since her sisters were kidnapped. No one wanted to live there anymore, so when Arden comes home it's to a house that is almost frozen in time. One nice spin is that even there Arden has a legacy of a family name and home, that legacy, to be blunt, doesn't include money.

Arden's financial concerns aren't limited to her own needs. It's also the town of Keokuk, which is a place that is no longer as vibrant as she remembers, is a place with shuttered stores. It's fallen on harder times. Old family friends have stayed, and Arden has to decide what her role, if any, will be in the town of Keokuk. Keokuk as a setting is key, and I confess at first I thought it was a made up location until they started naming famous residents and I recognized a name and looked up to the town and saw it, and some of the history in the book, was real.

There is mystery and suspense: what happened to those little girls? As grown up Arden begins to look into the past, she discovers secrets about her parents and grandparents that make her question her memories, as well as how she now views her parents.

And there is Arden herself, who I liked in part because she isn't perfect. Her returning to her childhood home is in some ways a running away from her current life, and part of her realizes that, as she tries to figure out what to do and how far to pursue the truth.

he Passenger by Lisa Lutz. Simon and Schuster. 2016. Library copy. 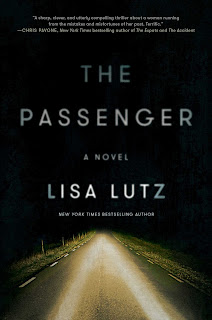 The Plot: What's a woman to do, when her husband falls down the stairs and accidently dies?

Well, I guess some women would call the police and believe that because they didn't do anything, it would all end up alright. Those are the women who wouldn't dream that anything bad would happen, that anything would go wrong, because bad things don't happen to good people.

Then there are the women who know better. Who see that the world isn't fair, and bad stuff happens for no reason, and secrets can be dangerous, and the best thing to do is to pack a suitcase and run.

Tanya Dubois is the type of woman who knows better than to stay around.

And the reason she knows this, is, well, needless to say, Tanya Dubois isn't her name. And she has a story to tell you.

Just, as she tells you -- keep an eye on your id and your credit cards and your cash.

With a healthy dose of suspense, because what Tanya is running from is starting to catch up with her. She is playing a dangerous game of survival, as she figures out who to trust, who not to trust, who is trying to kill her --

And I don't want to give away too many twists and turns.

But I'll say this; there is a bit of wry humor to the story, and in some ways you have to be as self-centered and focused on Tanya as she is herself. You can't think of the people whose names she takes, of those she lies to, of people who are hurt because they happen to be in her way. It's Tanya's story. Not theirs. She has to take care of herself, put herself first, if she wants to stay out of prison. If she wants to stay alive.

And yes, you'll start wondering, can you even trust Tanya? Or whatever her name is?

And you'll start wondering, what would you do, if you had to leave all you knew, including your name? How could you start over with nothing but yourself?

My last thoughts -- what I liked best about The Passenger was Tanya. Because she gets up and keeps going. Because she's a survivor. Because she's a decent person who is impossible situations, just trying to figure out how to put one step in front of another. And because of who she is and what she does, her cleverness, I kept picturing Kristen Bell as Tanya.