Review: The Girl on the Train


The Girl on the Train

The Plot: Rachel takes the same commuter train to work and home, day in, day out. She watches outside her window, watches the buildings and houses. There is one couple in particular she watches, who she names Jess and Jason. Wondering about them and their lives, making up a story about who and what they are.

Until one day, something happens. Something that forces her from observer to participant, off the train and into the lives of those she watches.

The Good: I confess, that I'm not sure what put The Girl on the Train on my must-read list. Once it went there (and it was a long hold list from the library!) I avoided any reviews or mentions of the book, because I didn't want spoilers. Since it was being talked about in the same breadth as Gone Girl

(my review here), I knew that I didn't want spoilers. I wanted to discover the book, and any twists and turns, on my own. (For another day is my perhaps contradictory stance on both not minding spoilers and also getting really annoyed when something I don't want spoiled is spoiled.)

To begin with, The Girl on the Train is nothing like Gone Girl: well, both have "girl" in the title. Are both are best-sellers with twists best discovered on one's own. But the unreliable narrator is different: Amy of Gone Girl is a deliberate manipulator of her own story, depending on her audience, and always believes she is the smartest person in the room. Rachel, the primary narrator of The Girl on the Train, is unreliable for different reasons. She doesn't know herself well enough to lie or manipulate the reader, even if at times she tells the story in a way to make herself look better. She also has problems with memory, and so she's unreliable because at times she just doesn't know.

There are three narrators, and I'll leave it to book clubs and others to discuss why these are "girls" and not women. There is Rachel, in her mid-thirties, the girl on the train looking out at life. There is Anna, a young mother, blissfully happy with her husband, her baby, her life. There is Megan, a wife and the crossroads, unsure of whether to pursue a new career or motherhood.

I picture you as a reader like myself; so here's the deal. I'll do nothing spoilery in this post, but if you want to talk spoilers, or things beyond what I do in this review, we'll do that in the comments. So reader, it's your choice, much like it was my choice to avoid reviews and news articles about the book.

The Girl on the Train is a mystery: a woman is missing. What happened to her? And why? It is also a a character study in Rachel, a woman whose life has come undone. She's of an age when she should be in a house, with a family, perhaps a career. She wants these things; she doesn't have these things; she's having more than a tough time reconciling herself to her life now. One of her few distractions, beyond drinking and wallowing in memories, is watching life outside the train window.

Anna's life of happiness is built on someone's else unhappiness, and you know what? Honestly? She doesn't care. That's right. Judge her as you want, the how of her romance and happiness started. Her daughter, her husband, isn't it what anyone wants? And she'll do what she can to keep anything from creeping into that unhappiness.

Megan doesn't quite know what she wants: she's drifting, anchored by a husband and a home but not much else. Motherhood, the next logical step for a wife in her twenties, isn't for her. She keeps her secrets and her past close and unshared with anyone, not even her husband.

These are the three who tell the story: and because it's just these three, with both limited perspectives and particular ways in which they see things, and because they are telling their stories at different times, it's a bit hard to figure things out. But the dots do connect, eventually, between the women and what they know and what they don't.

In some ways, I found this more satisfying than Gone Girl; I liked it more. At it's heart, The Girl on the Train is a mystery and I love a good mystery. It also has one of the more interesting, unapologetic alcoholics in literature; in some ways, I was reminded of Ken Bruen's Jack Taylor. And, because of their complexities and their integrity (each is true to themselves), I liked spending time with Rachel, Anna, and Megan. And while Amy amused me and kept me on her toes, I wouldn't say spending time with her was something I liked.

Review: The Year We Fell Down

The Year We Fell Down: A Hockey Romance (The Ivy Years Book 1) 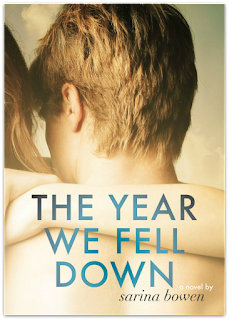 The Plot: Corey Callahan is excited to be starting her freshman year at college. Just like her brother, she is going to Harkness College.

Corey's also supposed to be playing ice hockey. But because of an accident her senior year, she's in a wheelchair. So Corey's not playing the sport that defined her. She's also not in a dorm with the others in her incoming class; instead, she's in the school's handicap accessible dorm.

Determination, and refusal to be babied by her parents, drove Corey to start her freshman year. Some things may be more of a challenge for her than others: Harkness is an old campus, and even when buildings are accessible it's not easy or simple.

But other things are great. She has a terrific roommate, and then there is the very cute guy across the hallway: Adam Hartley, a ice hockey player who took a fall over the summer and broke his leg in two places, which is why he's in the handicap accessible dorm. They become friends as together they figure their way around campus, and classes, when their are too many stairs and not enough elevators and ramps.

Corey finds herself falling for Hartley. But he is popular, and a jock, with a hot girlfriend. And he plays the sport she can never play again. Is he only thinking of her as the girl across the hall, a friend to play videogames with? Or could he fall for her?

The Good: I loved this book so, so much. When I, along with Sophie Brookover and Kelly Jensen, was preparing for the New Adult Genre webinar for the Massachusetts Library System, I asked for recommendations for books and Gail from Ticket To Anywhere recommended Sarina Bowen. A huge thanks for the suggestion.

The Year We Fell Down works for so many reasons: it's a college story where being at college, the setting, really matters. I don't say that lightly; some books with a college setting use the college as a simple backdrop, a device (much like dead parents) to give the older teen independence. In The Year We Fell Down, Harkness College matters. What Corey does at Harkness matters. She attends classes, goes to parties, makes friends. It's familiar to anyone who has been at college, but also provides a true portrait of what college is like. The Year We Fell Down is also about how college provides a place for older teens to become independent, to make choices, to succeed, to fail.

It's also a love story, with Corey and Hartley becoming friends and that becoming something more. (Heck, that's hardly a spoiler! It's a New Adult book. It's a romance. It's not about whether the couple gets together, but how and why.) It's real and believable. And as someone who doesn't like stories about cheaters, I'll add that "Hartley has a girlfriend" is handled very well. This is not a book about cheating; but it is a book about people in college sorting out their feelings and figuring out when and how to act out on those feelings.

It's also about a young woman recreating her life. Corey had been a jock: it's who she was, it's what took up her time, it was her identity. Her accident didn't just change her, physically; it also means that she has to recreate herself. Who is she, now? What does she like? It's not a quick process. And part of it is Corey adjusting to her new body. There is never a moment of info-dumping or "as you know" happening; information provided to the reader about Corey is organic and part of the story, while addressing everything from how using the bathroom, catheters, parties up stairs, and sex. (Again, not a spoiler -- it's a New Adult romance so of course there are sexytimes.)

The Year We Fell Down is first of a series, one of those series that isn't about a sequential story but rather interconnected stories, with overlapping characters. I'm looking forward to reading the other books.

On Tuesday, August 18, at 4:30 pm ET/ 1:30 pm PT, there will be a Little, Brown Twitter Chat with Jennifer E. Smith about her new book, Hello, Goodbye, and Everything in Between (publication date September 2015). 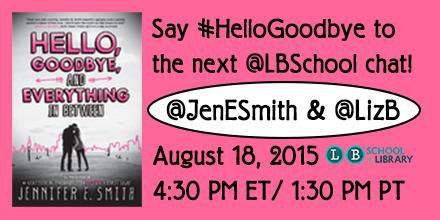 I'm happy to say that I've been invited to be part of it; and I'm looking forward to it very much.

As you can tell from my reviews of Smith's previous books (The Statistical Probability of Love at First Sight and This is What Happy Looks Like), I enjoy Smith's works and her writing so I'm looking forward to chatting with her on Twitter.

Twitter handles to know for the chat: @LBSchool, @JenESmith, and @LizB; and the hashtag to follow is #HelloGoodbye.

Make a note on your calendar; and don't worry, I'll be reminding you again before it starts!