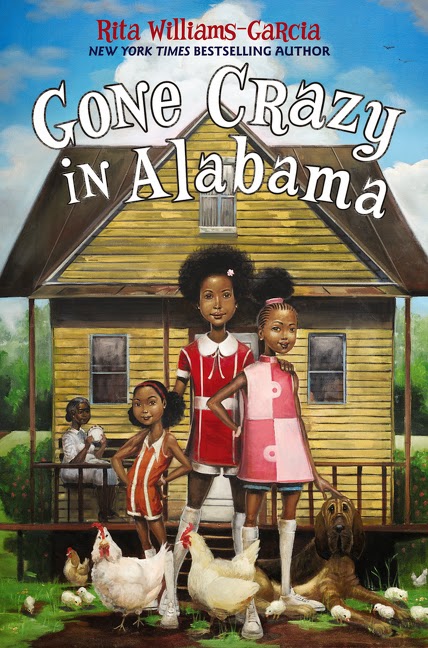 The Plot: It's the summer of 1969, and sisters Delphine, Vonetta, and Fern are back. This time, they're off to spend the summer in the south, in Alabama, with their grandmother and great grandmother. They will learn about the things that keep family together, and what keeps family apart. And they'll have fun and tears along the way.

The Good: When I wrote about One Crazy Summer, about the sisters spending the summer of 1968 with their estranged mother, I said, "I want a second book. I want to spend more time with the Gaither sisters. I want One Crazy Summer to be the start of a new series, like All Of A Kind Family / Betsy-Tacy / Little House on the Prairie."

Confession: when the second book, P.S. Be Eleven, was published in 2013 I didn't read it. I have a copy, it was just... I haven't read it. Yet. Which right now I'm actually glad about, for two reasons: it means I still have an unread book about the Gaither sisters, and it means that I can say with full confidence that these books stand alone.

The girls are now 12, 10, and 8; their father has remarried, his new wife is expecting (don't worry, the girls love her and she loves them), and the girls are going to Alabama to visit Big Ma, their grandmother.

The things I love about this book: the three girls are sent, alone, by bus, from New York City to Alabama. Delphine has the responsibility for getting them all their safely, but their father also relies on the other children and families who are traveling from the city to their families and relatives in the south. Here is a glimpse at a different time and place, where the father trusts his daughters (and the other travelers) yet at the same time cautions his daughters -- Alabama isn't New York. Be careful what you say to and around white people.

Once in Alabama, the action is mostly with family members. You see, Big Ma's mother, Ma Charles, has a half-sister Miss Trotter who she never speaks to. Miss Trotter's great-grandson, JimmyTrotter, is a friend to all three girls. The family secret is this: Ma Charles and Miss Trotter were born the same year. Their father married both their mothers. It's a complicated situation, learned through the eyes of twelve-year-old Delphine. Jealousy and other things keep these two women apart, yet geography and blood and shared relatives keep them together.

And it gets an additional layer of confusion when Delphine finds out that the Charles side of her family is related to a white family in town. Or, as Ma Charles puts it, "the white side." A family who is clearly racist, and maybe worse. And everyone knows about it but few people talk about. There are no easy answers or explanations; instead, it's presenting matter of fact truths: the ways that people talked to each other. The things that could and could not be said. The words used. The frustrations and fears.

Since this is about the Gaither sisters, once again Williams-Garcia captures sisterhood perfectly. These are sisters who fight fiercely and love even more fiercely. Who crave both independence and support. The way these girls interact is real and true; and also, look at that cover! Who wouldn't want to be them? To be friends with them? To have those amazing 1960s clothes?

And heck yes, a Favorite Book in 2015. With fingers crossed and much hope that this is not the last time we visit with Delphine, Vonetta, Fern, and the rest of their family.

Aw, this sounds great! I didn't know there were more books that went with One Crazy Summer (which I still haven't read but I SHALL SOON). It'll be so fun to check out all three!