More than a Mistress and No Man's Mistress 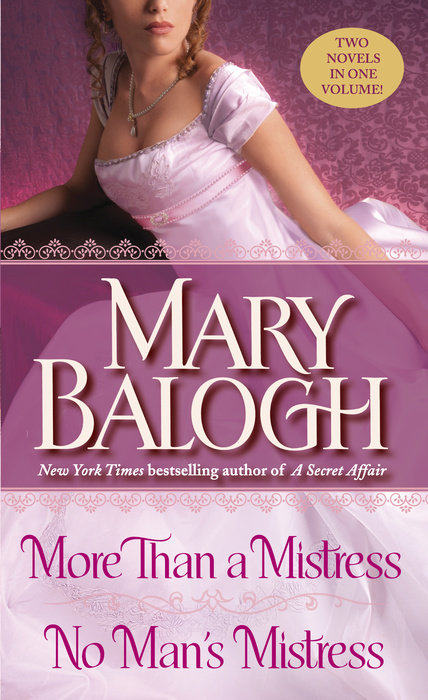 The Plot: Regency England. A series about the three Dudley siblings: Jocelyn, the arrogant Duke of Tresham; his younger brother, Ferdinand; and their sister, Angeline.

The Good: Confession: I thought I was borrowing Balogh's The Secret Affair and downloaded The Secret Mistress instead so got hooked on an entirely different series. I also started with the third in the series, but because it's the "prequel" that takes place before the other two, I think it's just as well.

The Dudley brothers are well known rakes, and let's just say the reputation is both inherited and earned.

Angeline adores her brothers, with all their foibles and brashness, dares and mistresses, but as much as she enjoys them, and as much as she recognizes that most rakes in London are just engaged in a flirtatious game she enjoys playing, she does not want one for a husband. No, no, no. So when she sees Edward Ailsbury, the Earl of Heyward, she sees the perfect husband: a true gentleman. Who cares if her brothers think he's a boring, dry stick? Who cares if he looks at her and sees a young woman who babbles away constantly and has the worst taste in hats? Angeline will convince Edward that they are perfect for each other.

Jocelyn is the hardest of the siblings to warm too: but then again, his name may be Jocelyn but his title is the Duke of Tresham and everyone, including his siblings and friends, call him Tresham. He's powerful and arrogant and let me say: it took me a while to get over just how entitled and privileged he was. His meet-cute with Jane in More Than a Mistress is that Tresham is involved in a duel (it involves a duel over a woman not his wife, actually, someone else's wife), she interrupts shouting "stop" and the end result is he gets wounded and blames Jane. Jane ends up loosing her job and gets hired by Tresham as his nurse.

While I wanted to just smack Tresh in his total not-caring about someone "lesser" than him -- who cares if she gets fired? Who cares if she's out of work? How dare she interrupt men at a duel! -- I gradually warmed to him. In part because while he is just that arrogant, he isn't possessive or physically abusive towards those working for him. In other words, he doesn't think, "oh she's my servant now I can do whatever I want." But of course they fall for each other! Oh, and Jane has a secret: she's on the run from possible murder and robbery charges but it's totally not her fault.

Jane's backstory is part of what I'm enjoying about Balogh's works: much as these Regencies are about the time, and are about people who are lucky enough to enjoy the fun and rewards of wealth and title, there are also people who are punished by the system and have to figure their ways around it. Here, Jane was unlucky enough to born in a time when she couldn't inherit outright; when she was dependent on the goodwill of her guardian; when the system failed her, she had few options. And to go back to Angeline: one reason I like Angeline is because she's like Cher (from Clueless, not the singer.) On the surface, a ditz who loves clothes; dig deeper, and that's true but it's also true she cares for those around her and looks beyond the surface. Angeline's immediate response to Jane, even before her full story is known, is of compassion.

No Man's Mistress is about middle sibling, Ferdinand. Second son, so no property or lands. He wins a country estate, goes to claim it -- and finds it is inhabited by Viola, who insists she owns the property. A rom-com battle of wills begins, with both stubbornly refusing to leave the house despite the fact that it means they are living together, unchaperoned (except for servants.) They are also both attracted towards each other and trying to deny it.

I admit to also getting annoyed with Ferdinand: I mean, he won the property by gambling. It's not like he paid for it. And it becomes clear that Viola is living there, and has for a while, and runs the property, and that she would be homeless and without income without it. He seems to think she has options, or that the options of  "oh, go stay with my sister in law" is a real plan.

OK, and now here's a major spoiler. But it's the reason I really like Balogh and can't wait to read her other books. As you may remember from my review of the Huxtable books, women willingly became mistresses; and one did so deliberately, as a means to make money because she had no options. No Man's Mistress also addresses this issue, exploring why, and how, someone would become a courtesan -- that is, a high priced whore. And it does so in a way that has compassion; that points out the problems inherent in a society like that of Regency England; and it allows for second chances and happy endings.

And Angeline once again puts compassion and love first.

Oh! And I nearly forgot. There is a final novella with extra chapters. Now a Bride (Short Story) (The Mistress Trilogy)

. For the record? For romances, I love epilogues/final chapters, with the couple still happy and still together.

The good news: there are plenty more Balogh books to read. The bad news: Where to start? Also, how many of these, if any, are connected?

I really like the Survivor's Club Septet. This is from Balogh's website:
These are the stories of six men and one woman, all severely wounded in one way or another during the Napoleonic Wars before ending up convalescing together at the home of the Duke of Stanbrook. The Proposal is the story of Hugo Emes, Lord Trentham. The Suitor, an e-novella is the story of Julian Crabbe, the duke's nephew and heir. The Arrangement is Vincent, Viscount Darleigh's story. The Escape is Sir Benedict Harper's story. Only Enchanting is Flavian Arnott, Viscount Ponsonby's story. Only a Promise is the story of Ralph Stockwood, Earl of Berwick. Only a Kiss is Imogen Hayes, Lady Barclay's story.

However I HATED Longing- it really bothered me because of the personal violence. I strongly recommend skipping that title.