And more on my chapter by chapter reading of Jane-Emily! 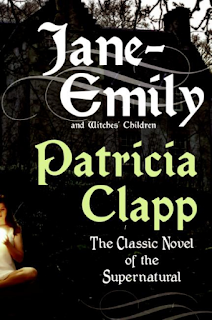 And another letter from Martin and it's all about Susie Pepper. This is also when I realized that if Louisa has any friends, or is getting letters from anyone other than Martin, she isn't telling us.

Of course, for this book, who really cares about Louisa's life or friends outside the story? Part of the great atmosphere is not just the escalating creepiness and linkage and obsession of Jane and Emily, but also how claustrophobic it all is, with the bulk of the book taking place in the house and the garden of Mrs. Canfield. There are apparently no neighbors with children, no friends. But as I type this up, I wonder.... have the stories of Emily, has Mrs. Canfield's apparent reclusiveness, meant that her house is "that" house in the neighborhood and she has no friends?

Oh, Susie on hearing about Doctor Pipe: "she's sorry you have to go out with old men."

OK, but at this point, what? Her own mother talks down about her, but for what? Tantrums at four because her parents were away? Melting one doll's face? So she's bratty but is she really such a bad seed?

Oh good lord the world is match-making Louisa and Doctor Pipe like there's no tomorrow.

And more food! I want the lobster and fresh bread and coffee! So Adam is cute. And a doctor. And lobster. But man -- obnoxious.

"Emily was the most strong-willed person I ever knew." (So that's why no voting for women?) "It never mattered to her whether something was right or wrong, or whether it might hurt someone else. If it pleased Emily -- that was all that mattered." What I love about this, is it explains to us the problem with Emily. But also, because it's a middle grade book that is more about the atmosphere of terror than the acts of terror, we aren't shown what it was that Emily did that showed she didn't know right from wrong (or didn't care); we don't see who is hurt. Instead, the voices of adults (Louisa, Doctor Pipe, Mrs. Canfield, Katie) repeatedly tell us that there was / is something wrong with Emily.

And we find out more how Emily died: pneumonia. Also, Doctor Pipe smokes again. "I sniffed with pleasure as the first small puffs of smoke floated over the table." Now, I didn't note the pipe smoking either of the times I'd read it before. And I wonder how it would go over with today's audience, when smoking is so actively hated on. (Though pipe smoking, like cigars, somehow is "cool" when cigarettes aren't.) Anyway, I remember quite the few contemporary books of the 70s and 80s when cigarette smoking wasn't just cool, but -- like here -- the smell of it was liked, was a fond memory, was a good connection.

Topic. While I was musing how social standards changes even how we think of a smell, we were finding out that basically Emily did a version of suicide by pneumonia, by deliberately getting herself sick. She did it for attention (specifically, Adam's) but it ended up killing her. That's pretty awful; but here's the thing. The person she hurt was herself. I wonder, much as I love how creepy this book is, and much how it still is creepy, I think a book like this today would have had to up child Emily's harm to others. There would be dead kittens, not melted dolls; and a mysterious death of a neighbor's child, not Emily's own self-inflicted illness.

And Adam remains condescending about Louisa's fears. I think this is deliberate -- not to show show Adam is obnoxious (he is), but to have the reader more easily dismiss his dismissing Louisa's fears.

Also as Adam and Louisa share about their lives, little is shared with the reader about Louisa. The reader knows more about Adam's schooling than Louisa's.

OK and at some point Adam says "I'm a doctor, Louisa" and I have some Star Trek flashbacks. And ugh -- "For a very pretty girl you get some strange ideas." He's so dismissive! And she's judged strictly on her looks! And no one cares. But again, I think this is because the target reader isn't a teen, who would want or expect more, even at the time of publication. It's for readers for who the idea of courtship and marriage is remote and removed enough that a man thinking a girl pretty is enough.

"Emily and I both loved her father more than we did each other." And more of the messed up family dynamics, or "why you shouldn't spoil your child." Mr. Canfield died shortly after his daughter -- of a heart attack, in her room.

WOWZA. And apparently Mrs. Canfield both believes in Ghost Emily and thinks she had a hand in the deaths of her father, brother, and sister-in-law.

One other thing -- the way Mr. Canfield treated his daughter is seen as spoiling, and also as a case where his family hadn't had daughters in ages so Emily was unique. Interesting to me, at least, the timeline isn't mentioned. How (if the married nearly 40 years before line about Katie is true) Emily was a late in marriage, unexpected but probably eagerly wanted, child. And while his emotional attachment to her is discussed, neither in text or even subtext is the thought this adult had: just how far his physical attachment went.

Oh, and after hearing some Emily stories all night, in the candlelight Louisa SEES A STRANGE FACE NOT HER OWN.

And then Louisa basically loses her shit and I feel sorry for Jane, to be honest.

So basically Emily lives in the ball, or her power is centered there. (But then, how / where did John's accident occur that Emily could be responsible? But isn't part of the terror of the story not whether or not Emily is haunting her family, but whether her family believes they are haunting her, giving her, even after death, the same power she had before?)

Oh, and a warning -- stay away from Emily's ball! Don't move her ball!

"I want to improve my mind -- " Oh, why is that, Louisa? Could his name rhyme with Doctor Pipe?

Though at least Louisa is doing something other than needlework and braiding Jane's hair. Which if this was a teen book would make one go "what?" but for the kid who is Jane's age, reading this book? OF COURSE an adult (and Louisa, while 18, is an adult) is going to be just this boring. And existing just for the children in their lives, to braid hair, and be angry, and be supportive.

And Jane is playing with a dollhouse and part of me wants the dollhouse.

Louisa is falling hard; "Everything we [Adam and Louisa] did together was a delight." I guess he's stopped his anti-voting lectures. By the way, everything was tennis, walks, canoeing, talking. And a kiss. This could easily satisfy those readers wanting a very clean, light romance.

The L word is used, and Adam remains self-important. So get this power move: he calls and tells Katie that it's important and Louisa has to hurry to the phone. So she does. And it's to tell her he loves her! Aw, sweet, right? But she says, dude, I thought something terrible happened! And Adam is such a dick: he's all "why do you have such a gloomy mind." Ugh this is not going to be a happy marriage.

He invites her to dinner with his Dad, and he tells her what to wear. It's a dress she's worn before, described before, is like her favorite.

And Louisa? Is all "damn Emily I know you liked him but I have him now." You know what is weird on a reread? Why Louisa is so hot about what a dead tween thought about her current boyfriend. It's almost gloating. Again, this wasn't a thought in prior readings and I also get that it's being used to direct the reader how to think -- or what to fear.

Also, Emily may have broken a dollhouse doll in anger. I mean Ghost Emily, not Years Ago Emily.

"It was not until I saw the approval in Adam's eyes that I was reassured." Sigh. Oh, Louisa.

And oh dear -- at Adam's house, "they were tended with patient firmness by a tall, erect, soft-spoken Negro woman named Sarah." Yeah, I'm not going to look up acceptable usage in 1912 versus when the book was published but seriously. Also, while I get that Adam's "I don't really know any ladies" line to Louisa was about his not having sisters or a mother, what is Sarah? Chopped liver?

And of course dinner with Dad, after Dad saying "don't let her go" based solely on her clothes and looks, ends up being . . . all about Emily.

I mean, I get Emily is bratty meets evil. But they way they sometimes talk about this poor, dead, child. At the time, it didn't bother me. Probably because as a kid? I knew fully well kids are bratty. And evil. And I didn't need evidence to convince me, beyond what was in the text. And because kids can be self-centered, it would make sense that a kid would be the topic of every conversation adults have.

Oh, and we get more on the theme of "if only her parents had been stricter," with Dad -- who is also a doctor -- basically saying it's all because Emily was spanked. No, really. "If he'd taken the flat of his hand to her once or twice" and "if that child had been raised properly, she'd be alive today."

But don't worry, Old Doctor isn't blaming dear Mrs. Canfield. Just her husband. It's not her fault that she was so "passionately in love with her husband" that she wasn't going to "anger him." (Um, isn't that fear of husband? Whatevs. Though I guess this may be why Doctor Pipe thinks women shouldn't vote, because Mrs. Canfield was too in love with Dead Husband to act rationally about Emily? But then isn't that a reason for no one to vote because Mr. Canfield was far from rationale."

Ok, and this gets weirder. "[Emily] belonged to her father." "Emily was a sultry person." "The real tragedy was Lydia. A woman who loved her husband more than life itself, and a man -- and a man who came to love his child more than his wife." OK, remove my modern view of whether this was incest or incest-like. Instead, it's about parents who put their child before themselves, so instead of being a real parent, and parenting, they let their kids get away with murder.

Can you imagine what these folks would think of modern parenting?

Email ThisBlogThis!Share to TwitterShare to FacebookShare to Pinterest
Labels: #JaneEmily

I am loving your chapter-by-chapter reactions and comments and thoughts. I never even thought about the rest of Louisa's "friends" or lack thereof.