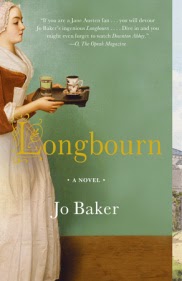 The Plot: The story of Pride and Prejudice, told from the point of view of the servants.

Sarah, one of the housemaids, is the main character -- and as she works long days, doing the laundry, cleaning the house, doing whatever is required -- she has her own dreams, her own hopes, and her own loves.

The Good: I was lucky enough to "discover" Pride and Prejudice on my own. I was in high school, it was a book on the shelf at home, I was bored with nothing to read. (Seriously, you want your kids to read? Have plenty of books at home and let them be bored.) Like many others, I fell hard for Elizabeth and Darcy and Elizabeth and Darcy together.

You may remember I was disappointed in the Pride and Prejudice mystery, Death Comes to Pemberley (yet I'm still looking forward to the upcoming TV program.) I am so happy to say that I had the exact opposite reaction to Longbourn: it was everything I wanted, and more, and I cannot recommend it highly enough.

One thing I find interested, now, as an older, adult reader, is how often books written long ago, books like Pride and Prejudice, don't show certain aspects of life at the time. It reveals, of course, both what the characters would (and wouldn't) think as well as what the author thinks the reader does and doesn't want to know. In other words, the servants in Pride and Prejudice are barely mentioned, even though, of course, they are there because these homes and houses needed staff to run.

Longbourn looks at those servants -- and I loved, actually, how little we see the Bennets, because how often would they interact with each other? And even though we know Elizabeth sees herself and her family as not being well off -- still, they did have servants even if they don't have many. And they had the privilege that having servants meant. Or, as Sarah puts it: "If Elizabeth had the washing of her own petticoats, Sarah often thought, she'd most likely be a sight more careful with them." In that one sentence we see a different side of Elizabeth's behavior, which in Pride and Prejudice is strictly shown as her independence and non-conformity. It also shows a disregard for the people who have to clean her clothes. It's careless and rude.

Sarah is one of two housemaids, and that's another thing -- this is no Downton Abbey. There are a couple other servants, yes, but altogether there are very few, expected to do very much, with very little pay or free time, and from a very young age. Yet, it's shown that these servants are lucky because they have jobs, a place to sleep, food. It's shown just how few options these workers had -- especially the women. This is one of those books that makes me value, all the more, the servants and serving class of the past -- the workers, the people making the best of their worlds, the people who strive to be happy with what they have. And makes me thankful for all the laws we have, against child labor, for minimum wage, for overtime.

The source of the fortunes of the wealthy is explored, especially just what it meant to be "in sugar." Ptolemy Bingley, one of the Bingley servants, was born a slave. I loved that Longbourn showed that England wasn't all white in the nineteenth century, and how others would interact with Ptolemy.

The risky position of women, love, and sex is also shown (and I won't go into more because spoilers.) I will say this: Longbourn, surprisingly, made me much more sympathetic to Mrs. Bennet and the pressure she was under to have a son and how precarious the family was without sons. She was no longer a silly woman, but rather a desperate one who had few options other than trying to have a male heir and then wanting security for her own daughters -- a security her husband was reluctant, or unable, to think about.

This was one of the few "adult" books I have read this year and I loved it too. I am a sucker anytime there's an Upstairs, Downstairs type story.