And Santa Brought A Ferret....

I am sharing -- with permission -- the letter that my niece wrote that resulted in her getting a ferret for Christmas.

Names have been changed.

Friday is almost here, the second best day of my life.* I am beyond excited to get my second ferret.  I know you're a little hesitant to allow me to buy and take care of a second ferret. I am begging you to let me get a second angel, and i’ll tell you why. Many people on instagram, and youtube support the idea of getting a second ferret, I hope you can too.

When I get my second ferret I will not ignore or neglect Oliver**, I will continue to care for both of them with the same love and affection. Maybe even additional affection. The second ferret is not replacing Oliver in any shape or form. Its just an additional ferret, the reasons are to improve Oliver’s health and to improve my joy levels as well. I have showed you that I am responsible for my ferret. I clean his cage every week, I scoop his litter each day. I change his food and water, and give him lots of toys and playtime. I can handle a second ferret. Its really no more daily effort to care for a second ferret. Additional costs and care do not show through until you have at least 6 ferrets.

I know what you're thinking, “This one can just get sick too.”*** You are absolutely correct, it can get sick just like Oliver. Although, the chances of that happening so early are slim. Adrenal Disease normally does not affect ferrets until they are at least 4 years old. If Oliver does indeed have this awful disease its a rare case. Whatever is going on with Oliver is an issue with his hormones and immune system. Its genetic and is not contagious. While the new ferret can become sick, he cannot catch any illnesses from Oliver.

Let me go ahead and answer some questions for you. “Will I have to take care of it?” No, it will be the same for when I am at dads, and the same when I return. “Do we need a second cage?” No, Ferrets are social animals who love to be together, Its recommended to house 2+ ferrets together. “What if its not trained?” Ferrets will actually do the training for you. Once you have one litter trained ferret, it will train everyone else. Same for tricks and obedience.

Just think for a second, how often do you see Oliver? Not often, he’s in my room unless I bring him to see you. If I didn't bring him out to see you might not even know I had a ferret. This second ferret will be the same. Please understand its not a huge deal to have multiple ferrets. Imagine Oliver was a hermit crab, if I added a few hermit crabs**** to my tank would there be any difference in cost or care? No not really, once you have a system you keep that system with no added fees. When I got Oliver it was costly because I was still getting on that program. Now, I am that program. Getting a second, or even a third ferret would not affect you in a negative way. They eat so little food it doesn't even have a dent in the bills. Each week I take a drinking glass and take one scoop of cat food and that lasts a week, he eats very little. I think that since i’m the caregiver I should decide how many ferrets I can handle.

To continue, I think the high cost of a ferret deters you from allowing me to get more. While yes they are exotic pets they are easy to care for pets. Some hermit crabs and fish cost well over $100. The high cost of ferrets is because they are difficult to breed and have a high demand so pet stores can charge more. Don’t let the cost steer you away. Ferret’s aren’t like cats. Getting an additional cat costs a lot more monthly, an additional cat is a big deal*****. But an additional ferret is like getting another frog******, fish,******* or hermit crab.  I already have the supplies its really not that big of a deal,

The ferret won’t just be fun for me, it will be fun for Sam******** and oliver. 2 ferrets is twice the fun, me and sam will have so much fun with them. Sam loves Oliver, he is always playing with him. Imagine the joy on his face when hes playing with 2 carpet sharks. And Oliver will have so much fun with a friend of his own. I am even planning to bring oliver to Petco so he can pick out the friend he wants.

So please mom let me get this Christmas present, I understand it would be my only present from Nana and Lizzy. Please mom, It would mean a lot, the Magic 8 ball said yes, can you too?

*The best day -- in anticipation that the second ferret will be joining the family on Friday.

**The niece already has a ferret. Whose name is Oliver. Oliver Dixon, actually: I chose the Dixon. For Daryl. This plea is for a second ferret.

***Oliver may or may not be sick. Diagnosis so far has been by Internet.

****She also has hermit crabs. I've lost track how many.

*******Well, there are the fish in the pond that used to be a hot tub. And the multiple tanks in the house. Mainly beta fish. Count? A lot.

Did the letter work? Well yes, it did! 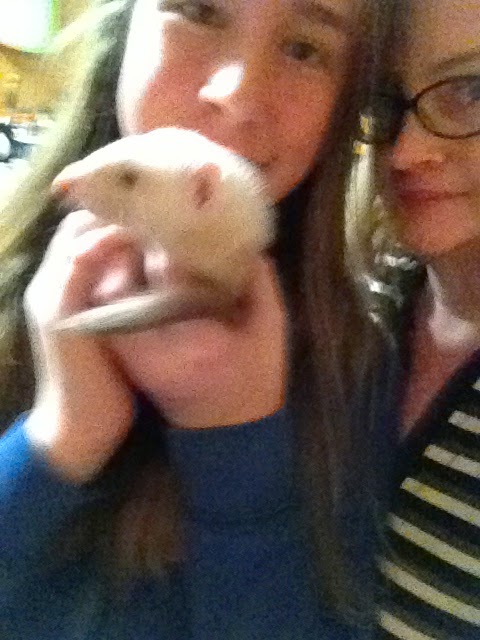 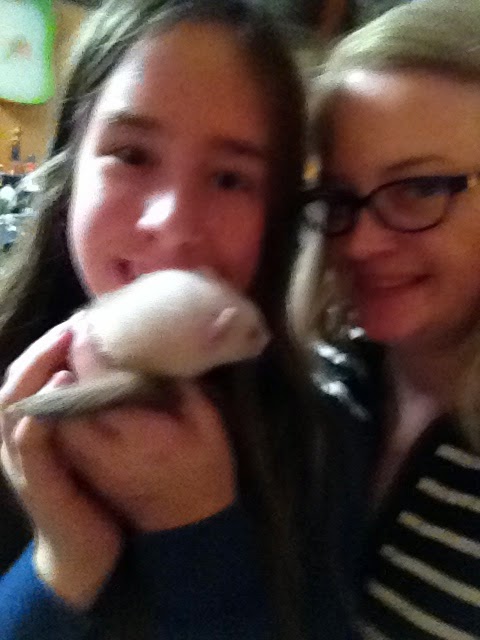 Congrats to your niece on her new ferret and her excellent powers of persuasion. If her school has a debate club I think she'd be a lock!

Thanks! and little Marshmallow is cute and fun. And yes...I hope she uses her powers for good. like debate clubs.