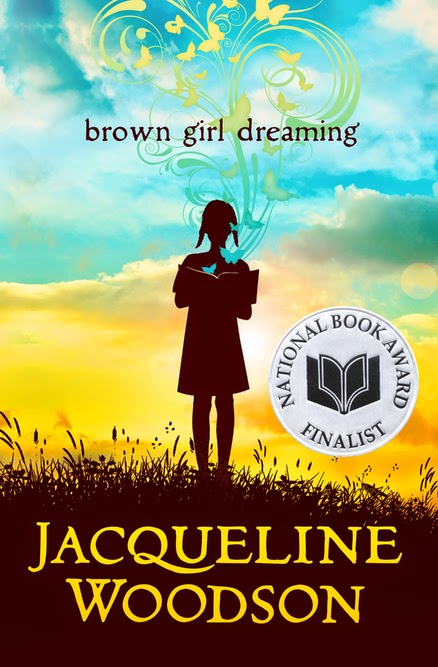 The Plot: Woodson uses poetry to tell the story of her childhood, growing up in the 1960s and 1970s. She was born in Ohio; moved to South Carolina; and later to New York City. It's a story of Woodson growing up, and learning more about the world around her, and learning how to process that world using words and stories.

The Good: First, yes, this book is wonderful. Perfect. Amazing. I was so, so happy to see it selected as the National Book Award Winner for Young People's Literature. I mean, there is so much out there that already establishes this as terrific, what do I have to add to the conversation?

I am born in Ohio but
the stories of South Carolina already run
like rivers
through my veins.

Brown Girl Dreaming is a look at what shapes one girl, born in Ohio in 1963, following her childhood until about fifth grade. And so on one level, the "obvious" level, it's a book aimed at those who are the child-Woodson's age.

It's also about a young African American girl in the 1960s and 1970s, living both in the South and the North, and her many worlds: the world of immediate family of mother and siblings, the bigger world of grandparents and aunts and uncles, the world of friends and school, and then civil rights and what that meant, or didn't mean. And all those things, while being told by a child, are things that readers of all ages are interested in.

So, people like myself -- born just three years after Woodson -- are potential readers. As are older readers who lived during that time. Just because, hey, I also remember watching The Big Blue Marble and singing along to the theme song, even if I did it from New Jersey.

The poetry may make it more accessible for some readers, but that doesn't mean it's easy or simple. Teen readers do like to read about teens -- but it's not the only thing they like to read about. Despite Woodson's age during the time of Brown Girl Dreaming, the things she lives through, her experiences, her world is bigger than her age. A parent's divorce; a move; a new sibling; a sick brother; learning about the world through books; and civil rights; all of this, all of what is in Brown Girl Dreaming, are of interest to all ages. I'd even argue that older readers -- older than ten, anyway -- will get more out of Brown Girl Dreaming because they will understand the references and the emotions in a way that younger readers cannot.

And, finally, selfishly, I don't want this to be it. I want the books that take Woodson further along her journey: Brown Teen Dreaming, Brown Woman Dreaming -- just to suggest a couple of possible titles.