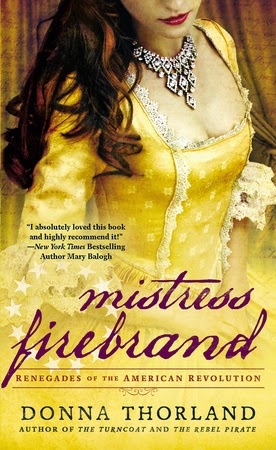 The Plot: Manhattan Island, 1775. Actress Jenny Leighton wants to meet the influential General John Burgoyne. Jenny is an aspiring playwright, and hopes that Burgoyne will become her patron, opening up the world of London theater to her.

American born, British intelligence officer Severin Devere's job is to protect Burgoyne and keep him safe from the American rebels. He's suspicious of the young American actress -- and also attracted to her.

The Revolution violently separates the two -- and when they meet up again, they are both in Manhattan. Jenny is still writing plays. Severin is still a British officer. But both are hiding secrets and playing a dangerous game. Where do their loyalties lie?

The Good: Part of the reason I love Mistress Firebrand is because so much happens, and it happens over a couple of years, starting in 1775 and ending in 1777. That also means that a lot happens, and some of them are twists and turns and I'm here, as usual, fretting over how much to tell you.

And the history. As readers of my blog and twitter feed may remember, I'm a fan of AMC's TURN: Washington's Spies and Mistress Firebrand is the perfect historical romance for fans of that show. (I'm also eager to read Thorland's other books; and, it turns out Thorland is a writer for another historical TV show I've been watching, Salem.) Saying that may make you realize one of the things in Mistress Firebrand that I don't want to spoil and it's something that rhymes with "spies." In other words, SPIES. And I'm not telling you who or what.

I like historical fiction that introduces me to areas, or adds to what I know, or brings to life areas. I loved all the information about the American theater, and how it worked, and the business of it, and performances being banned, and how actors and actresses were viewed -- it was just wonderful diving into Jenny's world. I also like historical fiction where people are not ignorant or innocent about sex. Jenny in the acting world is not naive; and I know more about the logistics of French letters (eighteenth century condoms) than I did before. Bows, who knew?

Jenny herself is a terrific character, who wants more out of her life and that more is to write. She has an aunt who is a famous actress, who is a mentor. Jenny comes from the New Jersey countryside, but thanks to her aunt, she wants more out of her life. She has her own ambitions and drive and it's just such a fresh and refreshing view of women in the eighteenth century. Based in part on what happens in the first part of the book, Jenny shifts her talents and becomes the mysterious "Cornelia," writing anti-British propaganda. She has a price on her head.

And Severin! Severin is legally the child of a British nobleman, but in truth is the son of an English mother and a Mohawk father. Severin's relationship with his natural father, and his Mohawk family and culture, is presented in a nuanced way. At first, for various reasons, Severin has decided he has to be the ultimate Englishman to prove himself. Severin begins to see the reality of the situation around him, and he shifts in his views and beliefs, about himself, about the Revolution, and about his own background.

As I said earlier, one thing I liked was that Mistress Firebrand took place over two years. Jenny and Severin's relationship grows from attraction and lust to love and respect. They also have their own individual involvement with the Revolutionary War: what side, why, what they are willing to do, why. Those journeys complement each other, yes, but they are always their own independent journeys.

So what you are saying is that a character named Jenny is crazy awesome as an actress and a spy? This seems...improbable. Mostly the Jennys of fiction are like, dead? Or servants? Or prostitutes. Or some combination of those things. THIS SOUNDS GREAT.

I won't lie... because of the time period and the theatre world there are some who think "prostitute" but she is not!