Review: A Madness So Discreet

A Madness So Discreet by Mindy McGinnis. Katherine Tegen Books, an imprint of Harper Collins Publishers. 2015. Reviewed from ARC. 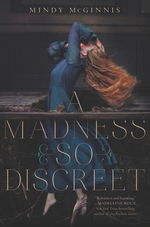 The Plot: Long version: Grace Mae is trapped in an insane asylum. As terrible as it is, with the cruel staff, harsh living conditions, and fellow inmates, it is still safer. Safer for her, for the baby that grows insider her, safer for her than....

But those are the thoughts and the words buried deep within her. Thoughts and words kept so tight inside her, that no sound comes from her. Not anymore.

When Grace reacts with violence to the straying hand of a drunk doctor, she finds herself in the damp, dark basement of the asylum. The worst place to be, where the most dangerous are sent.

Yet in the bleakest place she finds kindness. And escape. A purpose. And, possibly, justice.

Short version: Grace Mae is trapped in an insane asylum, because it's the best place for her rich family to hide her and her pregnancy. A brilliant doctor sees her, sees who she is -- not as an inmate, but as someone with a talent of observation that can help him with his own study of criminal minds. Chasing crimes is no easy business, especially when one has their own past


The Good: This is one of those books that is so good, and I so enjoyed the twists and turns of Grace's journey (both physically and emotionally), that I don't want to say anything.

I don't want to say why or how Grace ended up in an asylum.

I don't want to say who befriends Grace, and why.

I don't want to say how Grace manages to escape.

I will say that Grace ends up at another asylum; one so much better than the madhouse she had been before that it's like the difference between heaven and hell. And that difference is mainly in how the staff treats those in their care: with kindness and respect? Or with fear and disgust? With soft beds and decent food, or with rags and stale bread?

The doctor who Grace helps with criminal investigations appears a cold fish at first, one no better than the other staff at her first asylum. But things are never that black and white, and see, I don't want to say how he brings her to that new asylum, but the why is he has realized her matters of observation and memory and deduction can help him in his investigations. Even more so when others look at her and see not just a woman, but someone who is insane so can be dismissed and ignored.

Some final words: this is an Edgars Award Nominee, and I'm going to the Banquet in April so am reading all the Young Adult Nominees. Hopefully I get all five read before then so can do a post on all of them.

The setting is late nineteenth century America. Do you ever see those lists of reason that people used to be committed -- ranging from alcoholism to reads too many books? It's a bit funny and a bit sad. Reading A Madness So Discreet, it is only sad, whether it's the woman whose husband wanted a new wife; or the young girl infected with the pox; or someone who hears voices. The horrible place in Boston makes it sad; but it's also sad in the better, cleaner, safer, place, because even then, these women are there because there are so few options for them, so little medical knowledge, so few ways for them to control their lives.

And that is, at the end, why I adored A Madness So Discreet: because ultimately, it is about how Grace regains control of her life. How she manages to do it against terrible odds. And while this book stands on it's own, I'm very intrigued by Grace and her journey and hope to read about her again. So yes, a Favorite Book Read in 2016.

Wow, okay! I wasn't initially into the description of the book (American historical fiction is never my fave), but I love twists and turns, and I especially love super-excited blogger reviews. Adding to the list!