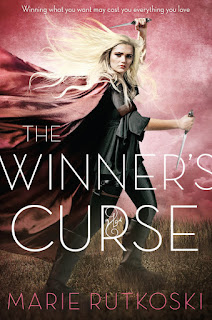 The Plot: Kestrel, the 17 year old daughter of General Trajan, buys a slave on a whim.

Kestrel's father had conquered the Herran peninsula a decade before; it's people where enslaved. Kestrel has grown up in a world of wealth and privilege, because of her father's success.

Still, she feels trapped by Valorian society. Yes, they are the winners, as their repeated conquests and world building proves. But there are strict rules for its citizens, and one is that Kestrel, like other citizens, must give value to the Valorian Empire by either being a soldier or producing future soldiers by marrying. She wants to do neither, but her wants don't matter.

Kestrel loves her father, and he wants her to enter the military. She may not have fighting skills, but she's already a good strategist. He indulges her music, even though everyone knows that music is something to be appreciated -- not made. That is below Valorians.

The slave she buys is named Smith, for the job he has been trained to do. He is a Herrani, about her age. And she wonders about him, about the temper and pride she sees in him, about what he was before his country was defeated.

His name wasn't always Smith. It was Arin. And he wasn't born into service or slavery. But those are his secrets, and he has many. And one of them is that he finds himself falling for, and caring for, the daughter of his enemy.

The Good: Can I do this book justice? I don't know. I'll start with I loved, loved, loved it, and the only reason I'm glad I didn't read it when it first came out two years ago is that now I can rush to read the second book.

I had heard good buzz, yes, but the initial cover, while beautiful, was too "girl in pretty dress." (And I'm still not sure about the current cover.) Plus the "she buys a slave and they fall for each other" didn't appeal to me.

I'm glad that I put both those aside. Because, wow. What a book. And yes Kestrel wears beautiful dresses, as her role in society demands. And yes, she buys a slave. And they fall for each other. But it is so much  more than that; and so much more nuanced than that.

This is the slavery of the conquered; and while I'll avoid spoilers, it's only been about ten years. So memories of the conquest and the brutality are fresh; dreams of independence and autonomy are born not in wishes but in memory.

The Valorian culture struck me as a mix of Roman and Regency (but the Regency may be because I'm in quite a reading binge of Regency Romance). Roman for the military and the conquest; Regency for the dresses and outfits and the way society interacts with each other. The modern twist is that the demand for military service applies to both men and women, and there is a certain level of gender equality.

Much as I liked Kestrel and her friends and even her father, my sympathies were always with Arin and his people. A reader like me will assume or infer rape or sexual assault on those who are conquered, enslaved, and owned, but The Winner's Curse never explicitly addresses this type of violence. Part of me wishes it did; part of me was glad it didn't. Since this is the first in the series, and The Hunger Games didn't explicitly address this type of abuse until the third book, I'm going to wait and see how it plays out and how it is addressed.

My sympathies meant that, much as I liked Kestrel, I kept waiting for Arin and the Herrani to go all Spartacus. I kept wanting that. And how this played out -- was very satisfying, and it kept me to the edge of my seat, and I look forward to how the series addresses the continuing issue of the conquered and the conquering and Empire building. Because that is the Winner's Curse, the curse of being the person who wins the war and takes the territory and the supplies and everything else you want: now you have to manage. To rule. To control. (OK, technically, as explained in the book, it's more an economic theory but this is how I view it, in terms of this book.)

I liked this too! I think the third one is out now, or it's at least very close to coming out, and I'm looking forward to seeing how the author wraps up the story. In the second book, Kestrel's a little more off-balance (for a lot of reasons), which made plot sense but was also frustrating because I so loved her brilliant strategic mind in the first book. I'm hoping she wins a few more bouts in the final one (as well as, of course, whatever the final war turns out to be).