Review: When We Collided

When We Collided by Emery Lord. Bloomsbury. 2016. Review copy from publisher. 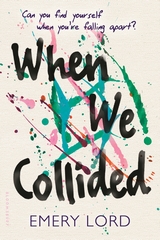 The Plot: Vivi is spending the summer at the California beach town of Verona Cove. She's there only a week and she's in love with every thing about it. And when she goes to work one day and sees a cute boy sitting outside the place she works, well, it's about to get even more perfect.

Jonah has always lived in Verona Cove, just as his parents did. Everyone knows him, and his parents, and his siblings. And his dad's restaurant. And that his dad died of a heart attack six months ago, shattering everything.

Vivi knows none of this; she doesn't look at him with pity.

And Jonah doesn't know Vivi's secrets, and she's glad about that, so she won't push him with questions.

Jonah and Vivi meet; and the collision shakes them both up, shaking secrets free.

The Good:I love this book! It's told in two voices, that of Vivi and Jonah. And it's a great summer romance, as these two opposites attract. Jonah is part of a large family, and lives in the town where his family has always lived  -- his roots are deep and strong. He's the sort of teenager that when his dad died, and his mom stopped getting out of bed, he quit sports to help his older sister and brother (both also still in their teens) take care of their younger siblings, as well as help at the restaurant. And he doesn't complain and he doesn't seek sympathy, he just gets it done.

And Vivi is the daughter of an artist, used to moving around -- like this summer, when they are staying in the house of a friend while her mother paints. And it's always just been the two of them, not even a father to see on weekends. Vivi is creative and extroverted, seeing the world as one big adventure. When she sees Jonah, she's attracted to both his looks but also to his "normalness," his typical teen boy looks. Jonah, also, at first, is attracted to Vivi's external qualities: she's pretty and lively.

OK, spoilers. Because the reason I love the book are spoilers.

Vivi has bipolar disorder. No, that's not a secret, but it's not something she tells Jonah because she doesn't want him to see her differently or judge her. She doesn't want to defend her actions as being her, not her disease. (And her secrets, well, it's why she respects that Jonah may not want to tell everything.) Vivi also has depression, and she's been given medicine for both, and at the start of the book she's decided to stop taking one of her pills.

Uh oh, I thought. I hope this isn't a book about how pills are bad because they make one "less" or some such. And it isn't -- it's the opposite. What it is, if anything, is a novel's worth of showing that Vivi does need, well, if not that pill, some pill -- maybe a different one, maybe a different dosage, but that she has a disease that needs treatment. Yes, Vivi is, always has been, outgoing and creative; she's a people person who always is doing something and thrives when others are around. But, as the book goes on, the reader, if not Vivi, can see, well, when things are different. Sometimes, yes, it's because of the chapter's in Jonah's perspective, or it's something Jonah has said, but other times it's Vivi's own words, the words and sentences and paragraphs that Lord uses changing.

Vivi, as I've said a few times, is creative and outgoing. She's in some ways bigger than life. She's dyed her hair and looks like Marilyn Monroe; she wears vintage clothes, often taking them apart to create something new; she's the girl who turns a regular day into an adventure. Uh oh, I thought.... not a manic pixie dream girl, please, no. And she isn't, in part because her voice is so strong, in both her chapters and in Jonah's. In part because she is a full, whole person, with her own story and dreams and plot and not just there to help Jonah get over his own grief and depression because of his father's death. But mostly because Vivi is always her own person, and doing her own thing -- she is someone who has a strong sense of self. At times, I have to say, that strength of Vivi, that strength of her personality, annoyed me. It veered towards self-centeredness and selfishness, but you know what? That's OK. Because it's human, and it's real, whether one is sixteen or seventeen or thirty-seven.

And Jonah. In some ways he's almost Vivi's dream boy, with his good looks and kindness; his understanding; his loving family for Vivi to fall in love with. But he isn't -- because he's angry, he's just pretty good at hiding it. Angry at his father's death and his mother's withdrawal, and angry at having to take care of his younger siblings, and having to balance adult responsibilities with his older siblings. But his anger is tempered with the truth that he also wants to do what's he doing: he wants to take care of them. He wants to help. He loves his family.

One of the things I really liked about Jonah, or rather, Jonah and Vivi, is their oppositeness sometimes caused friction. At it's best, it was "oh I love her outgoingness, I love his reserve," but at other times, frankly, they became annoyed or frustrated with one another. And sometimes, yes, Jonah needed to shaken out of his premature adulting; and sometimes Vivi needed to be reminded that rip tides do exist. But other times, it's just their personalities. Like a skinny dipping scene, where Vivi is one of the group jumping into the water and Jonah is not. Neither is wrong, both are true to themselves, and it's the scene where I thought -- ah, these two are not going to stay together. And they shouldn't.

And finally -- the last thing I loved about this book. Such a spoiler. But let's just say, Lord wrote a love story about two teens who are perfect for each other at this point in time -- not forever.

Oh man, I am so so SO glad you told me that this isn't a story about how pharmaceuticals are life-ruiners. (It's not that I disagree with that in all cases, but a lot of authors who write books from that perspective really lack nuance and it's frustrating.) This sounds terrific, now that I know all the spoilers. :p