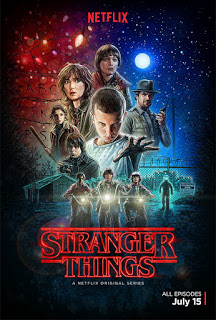 The Plot: A small town in the 1980s. A young boy rides home on his bicycle, and disappears. A desperate mother, a sheriff who didn't know he was looking for redemption, a brother who feels responsible, and boys who just miss their friend all search for answers.

There are stranger things in their town than they ever dreamt.

The Good: I loved this miniseries. It's amazing, it's wonderful, and you can read just about anywhere what made this so terrific.

It's a love letter to the movies of Steven Spielberg and the books of Stephen King, and so much more from that time period. I can't wait to rewatch, because there are so many things I'm sure I missed. It's not just the four friends -- it's the music, the way scenes are framed, the clothes.

And now we have spoilers. Because I had the misfortune of watching this after I'd seen Ghostbusters, and as I watched Stranger Things, I couldn't help but notice how the women were portrayed. And not portrayed. And that this is not a love letter to the childhood of the 80s, but, rather, the boyhood of the 80s.

I can have something I love, but also be disappointed and wish it were better. So, here are things that bothered me. And standing alone, individually, perhaps not a big deal, but the totality of it was what got to me

Winona Ryder (and man do I love her and she is terrific here) is Joyce, the mother of the Will, the missing boy. She's divorced and struggling financially and will do anything to get her son back. She's among the first who not just realizes that something supernatural has happened -- she goes all in, even if others think she's crazed from grief and not rational.

Her opposite is Karen, the mother of Mike, one of Will's friends.  She has the nice Colonial house with the husband and three children. Joyce and her home are messy and frantic; Nancy and her home are well put together. The working class struggling family versus the nuclear family. But, they seem to get along, and Karen comes over to offer Joyce support.

Joyce is a mom who will do anything, believe anything, to get her boy back. And yes, that's good....

But both Joyce and Karen, as the main adult women, are defined primarily by them both being mothers and what they do for their children. Later adult women include a mother whose child has been taken from her and is now comatose over it; and a spurned librarian (I thought that was funny, actually.)

The sheriff investigating the case, the police working the case, the scientists (yes, there are scientists because this is also as much science fiction as supernatural) are mainly men. There may be a secretary or assistant scattered there, but the main characters are men.

Then there is Nancy, Karen's teenage daughter and Mike's older sister. (There is also a younger sister, Holly, who mainly seems to remind us of Gertie from ET and I'm totally fine with that.) Nancy and most of her storyline is out of a John Hughes film. To Mike she is annoying, but at least one of his friends has a crush on her, so from the start she's introduced as the object of affection.

A cute boy likes Nancy, but Steve's a bit of an entitled prick but she doesn't see it, his friends are snarky and mean, hers is insecure. Remember, I said spoilers. When Nancy sleeps with the boy, the consequences are out of the horror films of the 70s and 80s: her best friend goes missing, photos are taken, everyone knows. And while there is a throwaway line or two to defuse it, it's a classic "punished for having sex" plot.

But it gets worse than that. Will's older brother, Jonathan, is out in the woods by where his brother's banged up bike was found taking photos at night, as one will. He sees Nancy and her friends and starts taking photos. And continues to do so - he's the one that takes the photos mentioned above. But because he is the "poor outcast" boy and Steve and friends are "entitled pricks" when Steve and company start giving Jonathan grief for what he did, Nancy wants them to stop and is clearly sympathetic to Jonathan. Steve breaks Jonathan's camera, and the sympathy is to Jonathan.

So basically: Jonathan stalked Nancy, took photos, but it falls within the "oh it's just that he likes you" line of storytelling and because she's a nice girl, she is pretty much OK with it. Because she just "knows" that it wasn't creepy stalking, it was accidental because I like you and I just happened to be there with my camera. And then, because her friend has gone missing like his brother, they band together to find out what happened. Which I am fine with, actually -- it's the much too easy acceptance of what he did that bothers me.

Nancy's efforts to save her friend turns her into a bit of a bad-ass. And it changes her relationship with Steve, which is great. And what happens also changes Steve, also great. But, without going into the details of how, as adventures happen and battles are fought, she adventures...and has to be rescued. She fights but ultimately needs another to save her.

And now we come to Eleven, a mysterious girl who is found and taken in by Mike and Will's other friends. They hide her in the basement. The actress is wonderful and engaging. Eleven has super powers that she is still just learning to control, and they have limits. What this means is that despite those super powers, she has to be saved and rescued and carried by the boys. (Oh and when she does her mind stuff she has "bleeding from the nose" which is yes, a total trope, but when the only one bleeding is the girl on the edge of puberty, the combination of power/blood/weakness is interesting, to say the least.)

But there's one more thing about Eleven. Mike, Will, and their other two friends (Dustin and Lucas) are all boys. Eleven is a girl. And the introduction of Eleven is quasi-Yoko like, causing division among the friends. Oh, and like Nancy, she becomes the object of affection. Because she cannot be a peer of the boys who find her: she also has to be a love interest. There is even, I kid you not, a makeover moment including wig, dress, and makeup, where Eleven then self-identifies as "pretty" -- pretty thanks to the boys! Not pretty until they make her up the way they think a "girl" should be, with a little-girl dress and a blond wig and makeup. (Eleven did indeed need some type of costume to help her hide in plain sight, because she has a shaved head, but the level they took it is...interesting.)

So, yes, I'm sure some are thinking I'm just being a crank or I didn't get it or I'm over-reading this.

So let me say again: I loved this series. It was great. But it's clearly a boys story, with very little places for a girl to see herself in the narrative that isn't "mother who'll do anything" or "girl who the boys like" or "girl who gets saved."

Liz, I really appreciate your thoughts on this, and especially saying that you liked it but also wished it could have been better, because I feel the same way. I would also like to add that I found Eleven's dress to be really distracting because I kept thinking how COLD she must have been going around outside in November with bare legs. I felt like Joyce or Nancy at least would have brought the poor girl some pants or something!

Bleh, this is really disappointing to hear. I'm glad you mentioned it, though -- hopefully now I can watch the show and appreciate the good things, without being disappointed/angry in its drawbacks. GOD that's frustrating.