How did it get to be June already?!?

Well, that's what happens when you take a mini holiday from posting. 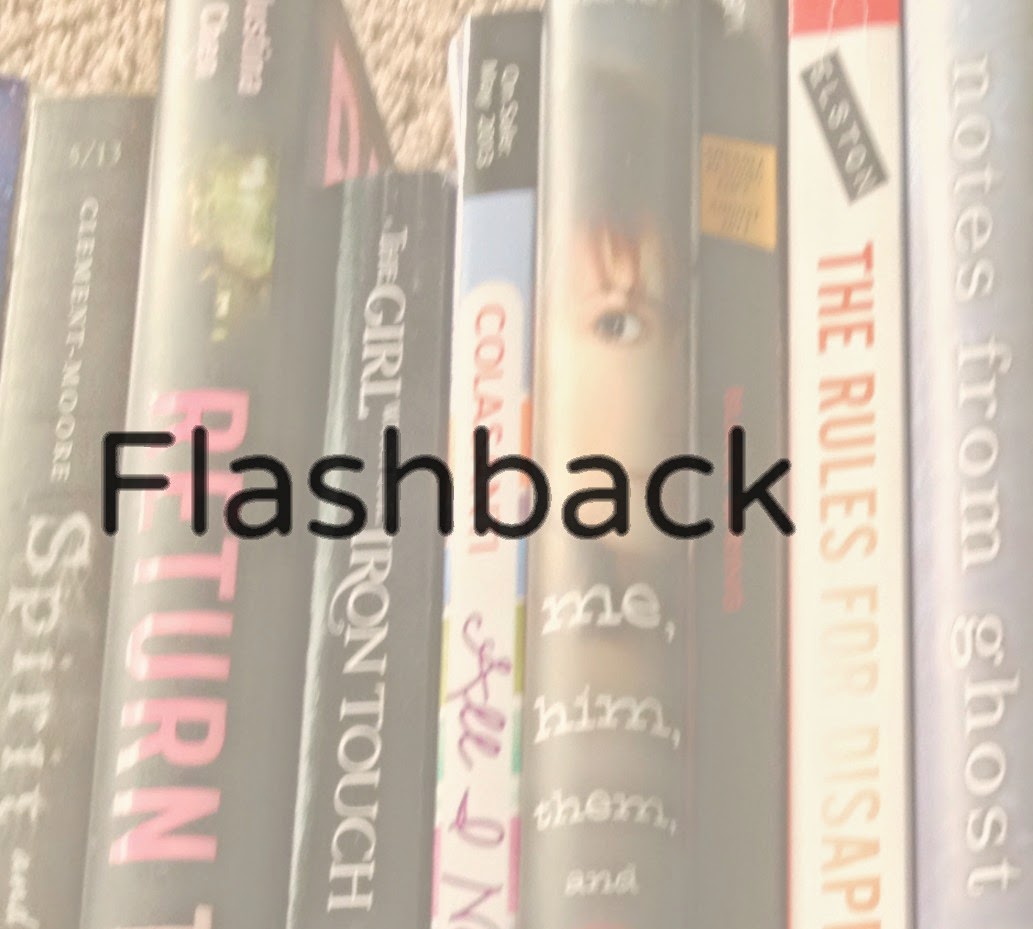 by Michelle Cooper. From my review: "The FitzOsbornes have lost their home; they are now royalty in exile. Aunt Charlotte’s good fortune to marry well means, well, they can depend on her large fortune to take care of them. Clothes, good food, servants — all are theirs. But what is the cost? . . . Cooper doesn’t rush the story; just like in real life, things take time and it takes awhile to find one’s footing. Sophie and the others have a new home and country to adjust to, as well as trying to figure out what they can do regain their home from the Germans. They may have titles, but it’s from a powerless nation. They don’t have money and are financially dependent on Aunt Charlotte. With the exception of Simon, who is a commoner with no connections or cash, they are teenagers. I adore Sophie, as well as Veronica. These two are fantastic! The only reason I’m glad that the laws prohibit Veronica from inheriting is I’m not sure she’d do well with the politics needed to be a ruler; she sure has the knowledge and history and integrity. I’d follow both of them anywhere, in exile or not."

by Maryrose Wood. From my review: "The three Incorrigible children (Alexander, Beowulf and Cassiopeia) and their governess, Miss Penelope Lumley, have returned from their London adventure and are happily ensconced in Ashton Place. Nothing ever remains safe and comfortable for these four, and unexpected guests of both the animal and human kind lead to new adventures and new questions about their mysterious origins."

by Holly Black. From my review: "Cassel Sharpe, 17, couldn’t stay out of trouble if he wanted to. (Now that’s a question; given his talents, his family, and his background, does he want to?) The Feds are forgiving his past crimes if he works for them, using his unique talent as a transformation worker, someone who can transform whatever he touches. His mother is in big trouble with the local crime boss, and all will be forgiven if Cassel does him one little favor. Cassel knows there is no such thing as one favor. It’s complicated by the fact that neither the mob nor the feds can know he’s working for the other. Oh, and another thing — the crime boss just happens to be the father of the girl Cassel loves. Just to make things all that more simple — not — Cassel has to worry about his senior year in high school. Classes, avoiding demerits, friends, and a possible blackmail scheme. It’s all in a day’s work for someone with a black heart like Cassel."

by Ilsa Bick. From my review: "One minute, Alex is hiking, trying to figure out her future and deal with her past. Sounds typical for a seventeen year old, but her future is complicated by an inoperable brain tumor and her past by the death of her parents four years before. An electromagnetic pulse changes that.
Suddenly, the world changes. No electronics are working. Alex find herself responsible for Ellie, an angry eight year old who just saw her grandfather die from the pulse. At first, they think the dangers they face are low supplies, a rough trek to the ranger’s station, and wild dogs. Then they run into two teenagers. Unlike Alex and Ellie, these kids are changed. They eat flesh. Human flesh."

by Elizabeth Hand. From my review: "1977. Merle, 18, is in Washington DC to attend the Corcoran School of Art. Art is her ticket out of nowheresville Virginia — but not the way some would think. Not in a make money or become famous way. Art is her way out because art is her life, it’s what she lives for, it’s what drives her. 1870. Arthur Rimbaud, 15, is running away from provincial Charleville, France to Paris. Poetry is what drives him and pushes him. Separated by contents and a century, two artists struggle to find a way to express themselves, to leave a mark, to become."

The World in Your Lunch Box: The Wacky History and Weird Science of Everyday Foods

by Claire Earner. From my review: "Aimed at a middle grade audience, The World in Your Lunch Box is to the point, providing quick facts and history. It’s a clever way to organize the information; instead of alphabetically, or by types of food, by typical lunches. I imagine the author had fun as she decided on what lunches to use! It’s quite interesting just how many foods are found in a week’s worth of food, and how much history can be learned, and how many cultures are represented."

by Elizabeth Wein. From my review: "France. 1943. Verity, a British spy, has been captured by the Nazis. “I AM A COWARD,” she explains. She has given the Nazis the wireless codes they wanted; she is now writing out her confession, explaining how and why she ended up in Ormaie in Nazi-occupied France, why she has the identify papers of Maddie Brodart, and why she is telling the truth and telling the Nazis every little thing. How much time has Verity bought for herself? A handful of days to write her confession; and after that, what? . . . . As the pages go by, the reader falls into the past. The horror and disgust at what Verity has done — given the Nazis the secret wireless codes in exchange for the return of her clothes — slowly fades away. Partly it  is because Verity is equally disgusted with herself, and had, as a child, thought she’d be as brave as her various ancestors such as William Wallace, and she cannot believe she hasn’t lived up to her ideals. Partly it is because, while Verity never gives direct descriptions or details because, of course, Von Linden knows what was done to her so why tell him, she gives enough sideway hints and references to burns and bruises and pins for the reader to realize that more was involved in the questioning of Verity than taking away her clothes. But, for me, what most led to my forgiving Verity is that, as she recounts her past, I can’t help but like her. . . . Oh, kiss me, Hardy."

. From my review: "When Loki steals the Tesseract and threatens to take over Earth, Nick Fury of S.H.I.E.L.D. has only one option. Assemble a group of super heroes to defeat Loki and recover the Tesseract. The problem is, most of those he wants to recruit for “the Avengers” don’t play well with others. “The Avengers” have to become  a real team, which may be almost as difficult as beating Loki."

The Summer My Life Began

by Shannon Greenland. From my review: "Elizabeth Margaret’s life has been planned to the smallest detail. Do well in school, go to an Ivy League college, got to law school, marry well, get a good job. She’s done all that has been expected of her. Valedictorian. Summer internship at a law firm. Harvard in the fall. So what if her only close friend is her younger sister, Gwyneth? Or that she hides cookbooks like they’re drug paraphernalia and has to sneak into the kitchen to cook? Her life is planned and Elizabeth Margaret complies, doing what pleases her parents and grandmother. Until now. A mysterious letter arrives from Aunt Tilly, a relative she didn’t even know existed, inviting her to spend the summer at her bed & breakfast in the Outer Banks, North Carolina. For the first time, Elizabeth Margaret does what is neither planned nor expected: she tells her family “no” and herself “yes.” She goes into the unknown, to meet this stranger, and — as the title says — her life begins."

Out of Sight, Out of Time (Gallagher Girls)

by Ally Carter. From my review: "Cammie Morgan awakes to find herself in a strange bed, in a strange country. Worst of all? A several month block of time is missing from her memory. The last thing she knew, it was the end of the school year and she was leaving, on her own, without telling anyone, to discover more about the secret Circle of Cavan that had targeted her. The wounds on her body tells her things may have happened that she doesn’t want to remember. Cammie’s going to need all her strength, all her spy skills, all her smarts, and all her friends to figure out what happened to her. Only problem is — when you run away from home, even though people are happy you’re alive, they’re still mad that you left."

The Whole Story of Half a Girl

by Veera Hiranandani. From my review: "When eleven-year-old Sonia’s father loses his job, she has to leave private school for public school. At her old school, everyone knew her; now, they wonder if she’s Indian like her father or Jewish like her mother. She’s trying to make new friends and keep in touch with old ones. To make matters worse, her father’s unemployment is taking more than a financial toll on her family. It’s also emotional. One day, he just doesn’t come home."

by Ellen Potter. From my review: "Orphaned Roo goes to live with her newly discovered rich uncle. Neglected and wild, she loves nature and the out of doors. She prefers being alone. Her uncle lives on an island in the middle of the St. Lawrence River, in a former children’s TB clinic. Roo is now cared for, but isolated, seeing only a handful of her uncle’s employees. Roo hears a mysterious humming, and it leads her to a secret garden."