Review: And We Stay 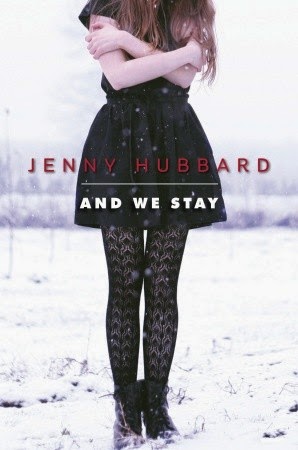 The Plot: January, 1995, and Emily Beam has just started at the Amherst School for Girls to finish her junior year. Before this she went to her local high school, and she isn't going to talk about why she is now in this boarding school in Massachusetts.

It was because of a boy. Not just any boy, her boyfriend. And the gun he took to school. And what happened. And why.

The Good: "Before Boston, before ASG, Emily had wanted nothing more than to be loved by a boy. When she was fourteen, sixteen, she had watched girls on the cheerleading squad sprout wings with each boyfriend. They became more beautiful, the beauty of confidence. For four months, Emily had it, too."

Emily had it with Paul, a senior. Paul, who took his grandmother's gun to school one day and killed himself.

And now Emily is at boarding school.

Why the setting of 1995? Because what happened with Paul, with Emily, at the school is Emily's secret. Or, not so much secret, as thing she cannot talk about. In today's world of social media and easy Internet access, the "why" of Paul would remain hers but the facts of it would be known.

And why Amherst? Because Emily becomes fascinated with another Emily who lived in Amherst, Emily Dickinson. Emily writes poetry, and it's in these poems that she gradually comes to terms with the boy she loved and what happened.

OK, Spoilers. Sorry, but this is one of the times when I want to talk about those secrets and yes.... for an original read of the book, it is best to discover it on your own.

Paul and Emily's relationship is what the Emily at 14, at 16, had wanted. And at first, Paul is what she wants and she loves him. But as time goes by -- and yes, it's only a handful of months but it's still time -- Emily realizes she wants more. When she gets pregnant, she tells him she's getting an abortion. The scene, later in the book, is heart breaking. At first she tells him it's because her parents say she has to, even though they haven't, until she owns that she doesn't want a baby. And she breaks up with him.

Maybe today Paul's reactions, wanting to marry Emily, being against her having an abortion, would be different than in 1995. Or, given some recent news stories, maybe not.

But And We Stay is about Emily living with, and surviving, what happened: Paul, being in love, not being in love, and how quickly it all happened: the break up, his suicide, her abortion. She is sent to boarding school in part so she doesn't have to go back to the whispers and bad memories of her old high school, but also about giving her a blank slate against which to come to terms with what happened. It is only her memories, her emotions, she has to think about.

It's told in the here and now of Emily at ASG, and so it's not just about Emily coming to terms with her past. It's also about her connecting, despite herself, with those around her. It's about finding her voice through her poetry.

My favorite line in the book is practically the last one: "It does not have to define who Emily is, was, or will be." And this is the heart of the book -- deciding what does, or does not, define us.

Other things that I like: Emily's parents. They do their best for her; she is not "sent away" to boarding school but sent to, for herself, not as punishment. That while the story is told in present tense, it still creates a distance between the reader and Emily, reflecting the distance Emily keeps between herself and the world. The friends she meets at ASG. And that there is no new boy or new romance.

I'm reading this one right now and enjoying it. I don't usually love books written in first person, but it works for this novel. It's a book that you know is going to break your heart as you read it.

And the way it's told, it just breaks it a little bit more. There is something so sad about the tense being used.