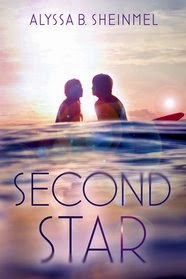 The Plot: Six months ago, Wendy's younger brothers disappeared. Everyone is convinced they are dead. Not Wendy. She doesn't care what the police, her parents, or her best friends think.

John and Michael loved surfing; and when Wendy meets Pete, a surfer, her instinct tells her following Pete may lead her to her missing brothers. She'll do whatever it takes to find John and Michael, including leaving home to join Pete and his band of carefree surfers.

The Good: Of course it's a retelling of Peter Pan!

I love the story of Peter Pan and what it has to say about embracing and rejecting adulthood and growing up. Sheinmel doesn't shy away from her source material: Wendy Darling is looking for her missing brothers. She has a dog named Nana. Pete's name, is, well -- Pete. Pete's girlfriend is Belle. And Pete's nemesis is Jas.

Surfing is the stand in for flying away to Neverland. Michael and John, like Pete and his friends, believe that the only thing that matters is the next wave. Wendy, the good daughter and good student -- she's on her way to Stanford after graduation -- didn't share her brothers' obsession and passion. In trying to find out what happened to her brothers, she enters their world -- and Pete's world.

Jas is the local drug dealer, dealing in "fairy dust", and Wendy's journey, her following in her brothers' path, brings her into Jas's world. Pete and Jas used to be friends, but the friendship ended when Jas started selling drugs.

As I said, I love the story of Peter Pan. I adore the 2003 film. I also love what Once Upon a Time did with their Peter Pan retelling: making Peter the villain, full stop. For the most part, thought, I've stayed away from sequels and retellings because of some of the elements of the original story, particularly Tiger Lily. Sheinmel's version avoids those problems by using Peter Pan as an inspiration, not a blueprint, and omits those parts of the story.

The essential part of the story is about growing up, yes -- and Second Star explores what it means to grow up, to embrace adulthood. Pete and Jas and the others have decided that there is only one particular way of moving forward, and that is to build their world around surfing. For Pete, that's living in abandoned homes and stealing to eat; for Jas, it's dealing drugs to buy surfboards and get money to travel.

Wendy is in search of her missing brothers, but she's also in search of herself. There is the pathway she has always been on, the one leading to Stanford. She jumps into Pete's world, into the world of her brothers -- and finds she loves surfing. Later, she finds herself with Jas, and finds herself falling for him, as she fell for Pete, and is confused by her emotions and desires. She's seeing two different pathways for her future, and has to figure out what is right for her, not her parents, not her brothers, not Pete and Jas. Those struggles are complicated, of course, and not simple -- and it's not as simple as "be a boring grown up" or "be self indulgent."

What else? There is a lot about surfing in this book. It's not just a device; it's a critical part of the story. I love that the "pirates" are drug dealers. Addiction and mental health issues are also touched on, especially as it becomes unclear how much of Wendy's search is real and how much is wish fulfillment.

Other reviews: Book Swoon; Beauty and the Bookshelf.

Any adaptation that can leave out Tiger Lily and that whole racist mess is doing the right thing. I'm not a huge fan of Peter Pan adaptations generally (though I liked Alias Hook, recently), but this sounds like a lot of fun.

Jenny, I let out a sigh of relief when I realized there would be no Tiger Lily.