Review: The Wrath and the Dawn

The Wrath and the Dawn 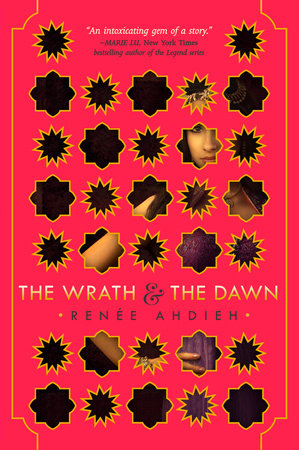 The Plot: A retelling of A Thousand and One Nights. Shahrzad is a young woman whose best friend, Shiva, was the latest bride, and victim, of Khalid, Caliph of Khorasan.

Khalid marries a young woman -- and the next day she is killed. And he moves on to marry another. And another dies.

Shahrzad's best friend was one of those brides. Her murder devastated the family. Shahrzad is determined to find out what happened to her friend, and why. So she does the unthinkable: she volunteers as bride.

And begins a desperate plan to survive, telling a story each night, to be continued only if she is allowed to live.

The Good: OK, so you know the general basics of A Thousand and One Nights, both the story of the storyteller and also the stories she tell.

I loved The Wrath and the Dawn, and was also very frustrated with it.

I've been reading a lot of regency romances and many of them are about marriages of convenience. And on one delightful, romantic level, that is what The Wrath and the Dawn is about, a young couple who don't know each other who find themselves falling in love with each other. This part of the story gave me all the feelings. Shahrzad has a childhood sweetheart, Tariq. Khalid has had many, many, wives -- and it turns out that he has also had a pretty terrible childhood with an emotionally abusive father. (More on that later). Yet despite her heart belonging to another, and his emotional walls, they find themselves falling in love with each other.

Before I go further, one of the things I really liked about this romance is that at the start Shahrzad is in love with someone else, a boy she's loved since was a young girl. And he loves her. This is a complex look at emotions, at growing up, at changing, at loving more than one person. It isn't a "love triangle," it's about how love isn't simple.

The Wrath and the Dawn is set in the far past, but it's not exactly clear when. It also is a fantasy, but it's not obvious, not at first. As the book goes on, it seems like some people have some magic; that magic exists; that curses may be real; but even by the end of the book, it's not strong magic, if that makes sense. It's magical potential, still being explored.

It wasn't until I was almost done with The Wrath and the Dawn that I realized it's not a standalone book. There's a sequel coming, next May.

And now to my frustrations -- and it has to do with all those dead wives. So we now entering spoiler town. Stop, now, if you are sensitive about spoilers and prefer to discover a book by yourself.

Those dead wives, all young girls, bothered me a lot. They are the reason Shahrzad has thrown herself into danger, without much of any plan. We see how Shiva's death devastated family and friends; we here of riots because of the endless deaths. But here is the thing: deaths. No, murders. Deliberate killings. The "reason" given is a curse placed about Khalid.

BUT. BUT. As I read, I felt very little sympathy for the dead from Khalid and those around him; I felt as if the soldiers surrounding Khalid who knew about the curse felt that the payment of murdered girls was somehow acceptable. Basically, "kill the girls are something terrible will happen" and the response was "oh, OK, but our biggest worry is how will Khalid bear the burden of those dead girls?"

No, the biggest worry should be those girls, individually and collectively.

About half way through my rage about those girls was such that I wished to know more about them as individuals and thought, oh, if only Khalid and the others saw them as people, as real, then, well. That would change things. And then I found out that Khalid did see them, know them, that way, and yet the killings went on and I didn't feel any better, my disgust wasn't lessened, to know that Khalid mourned them individually and felt really, really, really, really bad about it.

Then, after that, I fantasized about the revenge I wished upon those who supported the killings, who helped the deaths take place. Except then I found out that the curse itself was the revenge for a death, and I saw how revenge killing isn't an answer.

And I liked this about The Wrath and the Dawn, that what I wanted to happen was shown to not be an answer.

What is the answer? These girls are dead, and by the end of this book while I saw forgiveness in Shahrzad, while I saw that revenge and feeling really bad weren't answers, I wasn't given any answers. I loved this book so much it's a Favorite Book Read in 2015, and I'll eagerly read the sequel. But I'll be doing so wanting to know not just what happens next for the characters and the plot, but wondering whether it's possible in world created here for these young women to have any type of justice. I fear this world is so patriarchal that the reality of that world is that of no justice. I fear that class matters so much that the importance of the male ruler over non-royal women means that there can be no justice for them.

I wonder if forgiveness means there can be no justice.

This book looks so fab, and yet the thing you're talking about with the dead girls has left me reluctant to pick it up for a while now. It's always the tricky thing with 1001 Nights retellings! I want to love them, yet it's a very hard thing to walk a character back from that you're supposed to believe in as a romantic hero.