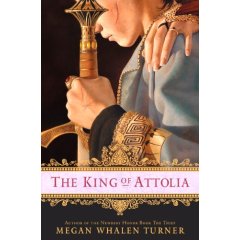 The King of Attolia by Megan Whalen Turner

The Plot: Costis is a loyal guard to his Queen, the Queen of Attolia. Like most loyal Attolians, he is angry that The Thief of Eddis has manipulated his way into becoming the husband of the Queen and is now the King of Attolia. The King is nothing more than hick from Eddis, and a thief to boot. He kidnapped the Queen to force her into marriage! And when Costis cannot bear it any more, he punches the King.

He has punched the King in the mouth.

But the King lets Costis live. And Costis finds out that he has a thing or two to learn about the King of Attolia.

The Good: Let's just say if you knew me in person, you'd see how I get downright giddy and smiley and giggly like a schoolgirl when I try to talk about this book.

TKOA lives up to the two prior books that feature Eugenides aka Gen, the Thief of Eddis and now the King of Attolia. Gen was introduced in The Thief, published in 1996, and returned in The Queen of Attolia, published in 2000. Silence. Deep, appalled silence. TKOA stands alone; but there is room for a sequel (or 5 or 10). And the idea of having to wait so long for the next one . . . . I can't think about that now. I want to instead concentrate on the good, which is, quite simply, my love for Gen. And for MWT's writing.

Eugenides is brilliant and stubborn, brave and stupid. What else? Arrogant. Vain. Insufferable. Rude. And you can kind of see why Costis and the Attolians who don't know our Gen like we do would dislike Gen to the point where punching him (punching a one armed man! who is King!) seems like the right thing to do.

This book can work for the new reader, because, like Costis, they don't realize that Gen is, well, Gen. They'll be surprised and thrilled by the reveals: by Costis beginning to see who the real Gen is, and what he is capable of, rather than the face of the young fool Gen presents at court.

For those of us who know Gen, part of the delight is in knowing how wrong Costis is, and the wonderful anticipation of waiting for the reveal. For once, we are on Gen's side, we "know" what to expect, we are part of the tricks and strategy. Or are we? Gen still has a few surprises up his sleeve, and even the person who thinks he knows Gen may discover that he or she doesn't know the King of Attolia.

Yes, I am smiling as I write this because MWT has also created an extremely realistic world, where the countries of Sounis, Eddis and Attolia are all very real; each is a mix of gray, with no "good" country nor "bad" ruler. Part of my delight is knowing that there is so much more still to be told: will these three countries be able to unite to fight the Mede? Can they retain their independence? What is happening with the Mede? Where does Gen's loyalties lie?

The Queen cut off Gen's hand; and now they are married. And it may be wrong, but I adore these two together. The balance of power, of love, of politics, of loyalty, is, gosh darn it I think I've run out of adjectives!, anyway, the love story is touching and raw and weird.

TKOA is one of the best books I've read in a long time. I'm recommending it right and left, not just to teens but also to adults. If there is any justice in this world, TKOA will be an award winner. This is one of my Best Books of 2006.

You don't think you deserved to be promoted after [the battle of] Thegmis; you said you were just doing your duty. Enkelis never lets a good job go by without taking credit for it. He wants to be captain someday so he makes sure he is better than anyone else. You just want to be better.

Who would want to be married to the woman who cut off his right hand?

She is ruthless. And it is a good thing she is, because she wouldn't be Queen if she weren't. She is brilliant and beautiful and terrifying. It's a fine way to feel about your queen, not your wife.

And sadly, if I continue with my favorite lines, I will reveal too much of the plot.
at April 30, 2006

Hi! you are so very lucky to be able to read this book.

I have been looking for this book in our local bookstores here in the Philippines, unfortunately i coudn't find any copy.

Gen is worth each and every post; he is awesome!

I love how smart he is and how people continue to underestimate him.

Why isn't there a fan site for Gen or MWT. The books are great and TKOA is m favorite of the three, and I am looking for information as to when the next might come out (waiting anxiousl)

Anonymous 8:03: Are you on LiveJournal? They have a great community of all things Gen, called "Eddis, Attolia, Sounis...And Gen". It's at http://community.livejournal.com/sounis/

The praise your review gave this book is very well deserved. After I read it, I went around madly scribbling "E + I" all over everything. =] Eugenides and Irene are a magnificent couple.

my fav line from TKOA is:

He wasn't an idoit, whatever Sejanus said. He was a conniving bastard.

(back to me) u kind of have to know the circumstances to find it funny. :D

I know exactly what you are talking about. However, if you have ever listened to the Book on CD of TKOA, I think the funniest line is at the end, when he is drunk.
"...my god is the god of balance, and of course, the preservation of thieves." The guy who does the CD is really good! I laugh every time I hear it and make all my friends listen to it.

this book is soooo good! i love it so much! i've reread it at least 8 times. the plot and intrigue are wonderfully deep. i really hope she writes another book!

Gen is awesome *sigh*.
I loved it when they were doing the huge fight in the court yard and he was challenging everyone I was so tense at that point I thought I was gonna burst!!

omg!! the fourth book is coming out in 2010!!! i wish it could be just NEXT year! is so frustrating waiting on books to come out by a year or years! MY LIFE is shortening.. ahh Love GEN!
I do hope its not written in another p.o.v. I like reading more about Gen and Irene than just snip shots bits of what ppl see!!

The guy looks like a troublemaker.
He clenches his enhancing sword,
holding it close to himself.
His scars stand out on his pale skin,
he looks tense and alert.
His elegant clothes are still,
shining in the soft light.

She puts her hand on his shoulder,
as if assuringly, supportingly.
Many recognize her ring,
which claims her authority.
Glinting the ring on his finger,
informs him of whom he is.

His smile is kind,
his hair messy, wild looking,
his scars making him look dangerous.
He is very young,
but surprisingly intimidating,
the King of Attolia.