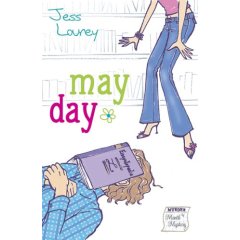 May Day by Jess Lourey.

The Plot: Mira James, a twenty-something grad student, leaves Minneapolis for a part time job in a library in rural Battle Lake. She's barely settled in when she finds a dead body in the stacks.

Mira has been getting by in Minneapolis; her decision to move to Battle Lake is about leaving one place than going to another. May Day is part "throw everything into a car and start over" fantasy.

The dead guy she finds in the stacks? Turns out to be the guy she was dating; it's hard out here for us singletons!

And finally, I adored the pop culture references: Mira thinks, "I marveled at how much television had prepared me for life," because Charlie's Angels (the TV series!) is her inspiration and guide book for breaking into someone's home in pursuit of solving the murder.

Finally: The Pop Goes The Library Interview with Jess Lourey.
at April 22, 2006

Great review! I'm sure Jess will love it.