Review: We Were Liars

by E. Lockhart (Delacorte Press, an imprint of Random House). 2014. Review from ARC. 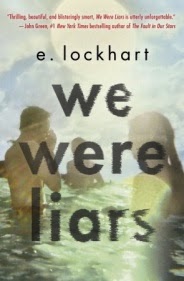 The Plot: Cady, nearly eighteen, had a terrible accident two years before. She is still recovering, still not herself. Cady is hoping that a summer spent with her three best friends, the "Liars," will make things better. Or, that it will be a start to being the person she used to be.

Love, friendship, loyalty, family. This is what Cady thinks she is returning to. Cady thinks her summer will be about healing and friendship, brought to her by being with those she loves.

Instead, she is going to learn the truth.

The Good: Cady tells us her story, and she frames it not in who she is but in who her family is. "Welcome to the beautiful Sinclair family. No one is a criminal. No one is an addict. No one is a failure."

She is a Sinclair. And "we were liars."

The Sinclairs are a rich family. No, even richer than that. Her grandfather took family money and made even more. Each of his three daughters has a trust fund. The family summers on an island, an island that is home just to the family. In addition to the family home, each daughter has her own house. No one else lives on the island, well, except for the help during the summer. Oh, they are rich, and beautiful, and privileged.


It all looks so picture perfect. Part of that perfection is the tight, best friend bond between Cady and her cousins, Johnny and Mirren. Each the eldest child of one of the three daughters. They are together each summer, reuniting from the places and lives they live during the rest of the year. Gat, the nephew of Johnny's mother's boyfriend, joins the group. Somehow, four becomes the perfect number and each summer is better than the year before. Until Cady's accident.

We Were Liars is Cady's return to the island, to her best friends, after almost two years away, because of her accident and her parent's divorce. Her accident has caused terrible migraines and memory loss; she is an unreliable narrator, to say the least. That she and her friends were called the liars is another clue to how much, and when, they should be believed.

Part of why I adored We Were Liars is because Lockhart does such a beautiful job of creating the nostalgia a teenager feels for their childhood, and of the magic of innocent summers. Even if you're not a privileged teen going to a private island, childhood and summer and friendships are true for all of us. Before there is a chance to be wrapped in that warm cocoon of memory, though, We Were Liars lets us know that how we remember childhood does not mean that is how our childhood was. There are hints from the first that the perfect family is not perfect, but as Cady's summer passes, and as she begins to remember the events of two summers ago, the flaws and cracks of the family are revealed. (It is, in essence, what happens once you move from the children's table to the adult table at family holidays.)

Is the grandfather loving, or is he using his money to control his daughters and grandchildren? Is Gat, the almost-cousin, included among the Sinclairs or is he always an outsider because of the color of his skin? Are the sisters close, or competing to get more of the family money? And what secrets do the cousins keep from each other? Are Cady and her cousins fated to repeat the familiar family patterns, or can they break the bonds of family ties?

This exploration of identity, of the truth behind the illusion, was wonderful. It may be heightened because the money is more, but the Sinclairs are hardly the first or only family who wonders what the neighbors think; who don't discuss unpleasant truths; who fight over a family heirloom because it represents love. A first read may result in thinking the Sinclairs are so wealthy that they and their problems are "other," too removed, but as time passes and Cady and her family haunts you the way they did me,  you realize -- the problems are the same for many of us.

I first wrote this review after I read the book, and in rereading it, and remembering Liars, there is more I want to say. I kept on thinking about the Sinclairs and their money, and gradually thought less about the wealth and more about the privilege. How the privilege both gave the Sinclairs opportunities but also limited when, and how, those chances were pursued. And that the exaggeration of that privilege -- so much money! servants! travel! their own island! -- is necessary to show that privilege exists and what, exactly, it means.

I loved the language Lockhart uses in We Were Liars. Here is Cady, describing her beloved "liars": "Mirren. She is sugar. She is curiosity and rain. Johnny. he is bounce. He is effort and snark." Gat: "He is contemplation and enthusiasm. Ambition and strong coffee." Truth be told, I'd love to have Cady describe me, her choice of words are so perfect.

Cady's secret. Her accident, and what happened, so that "the last two years [were spent] in a shell of headache pain and self-pity." I don't want to reveal too much, because what matters is not just "what happened" but when, and how, Cady remembers. Remember the "we" were liars -- so it's not just Cady's own secrets.

I adore Cady, her voice, her character. That she is an unreliable narrator makes it that much better. And the plot, the structure, of trying to understand, along with Cady, just what happened. And here's a confession: I cannot say, at the end of the day, that I liked Cady. But I can say I loved her.

Yours is the second rave review of We Were Liars that I've read this week. I liked-didn't-love The Disreputable History of Frankie Landau-Banks, but I think it's time to give E. Lockhart another go. :)