Review: We Are The Goldens

We Are the Goldens 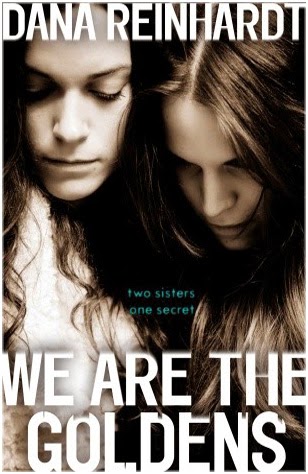 The Plot: Nell and Layla. Two sisters so close, in age and friendship, that as a toddler Nell thought she and her older sister shared a name: Nellayla.

Time passes, and things change, but Nell, fifteen, is convinced one thing does not: the sisters Golden. Their parents divorce? The sisters survive and thrive. High school? Even though Layla is two grades ahead, her younger sister is always welcome and invited.

At first, high school is exactly what Nell expected and hoped. She is Layla's younger sister. Nell gets on her sister's soccer team. Nell gets invited to junior parties.

But something is wrong. Something isn't quite right. Is it just Layla growing up, growing away from her sister? Or is it something more?

The Good: I've been on such a roll with loving the books I'm reading!

Nell, the younger sister, is telling the story. Nell, who seems their story as one: we are the Goldens. This is not Layla's story, not a story of growing up, growing older, growing away. This is the story of the one left behind: Nell.

Barely two years separate the girls; they only reason they are two grades apart is when they were enrolled in school.

Layla is older, and living her own life, but she's also keeping secrets from her sister.

And, as usual, I adore Reinhardt's writing and complicated families. Layla and Nell are the children of older parents; their mother was over 40 when they were born, Layla the result of IVF and Nell the surprise baby, the old-fashioned way. Their parents later divorced. They are well off enough for private school, but not for Layla to have the car she wants.

Early in the book, Layla has convinced her mother to allow her to stay home during a family vacation, a yearly spa weekend with the girls, their mother, and their grandmother. Nell is suspicious of Layla, and Layla's reasons (so much homework!) and surprised that her mother allows it. Her mother later says, "It was only a matter of time before her private life became more important than what she does with her family. It's part of growing up. It'll happen to you too, it probably already is happening to you. And that's okay. It really is, even though I'd much prefer for you to always be my baby."

And while I like that the mother understands her elder daughter's growing independence, and wants to support it, what I love is what the mother says next: "It's okay. Because someday you and your sister will do exactly this. You'll come to an airport somewhere to pick me up and all you'll want to do is be with me, with someone who knows and understands you, and we'll spend the whole weekend talking." Maybe it's because their mother came to parenthood at an older age, when she herself was more mature. Whatever the reason, she gets the long game of parent/child relationships, and realizes and accepts that a child moves away but will come back.

If only it was that simple, for Nell and Layla, that their relationship is changing and that Nell has to adjust and not cling to the past.

Spoiler, here. Necessary. Not entirely a surprise, as it's in the story summary and publication data. It's not just that Layla is getting her own interests or wants distance from her sister, it's not that she is becoming an individual rather than a sister or daughter. It's the why it's happening. Layla is involved with her teacher. He is why there are secrets.

Poor Nell: at first it seems as if she's just the clinging younger sister, who won't give her sister breathing room, who can only identify herself as sister. Except she realizes there is something more, and this puts Nell in a difficult, impossible situation. How does she support Layla? How does she show her love? Is it by keeping Layla's secrets, remaining the one person Layla can trust?

Losing Layla -- because even at best, Layla's new focus is her new boyfriend -- leaves Nell a bit adrift. She has her best friend, Felix, and there is a boy she has a crush on, Sam. Layla putting up distance pushes Nell into exploring her own interests, doing things that Layla wouldn't do.

Here's the thing about Nell and Layla: maybe, because Nell has always had Layla, she hasn't had a girl friend. She has Felix De La Cruz, who is a best friend and, maybe, something more. But Nell has a crush on Sam -- and wow, I just loved how wonderfully We Are the Goldens depicts that crush, that hoping for something, then hoping for something more. And Nell is left to navigate her feelings and emotions almost alone, because Layla is all about her own love life and Felix wants to be a good friend but he has his own things to deal with.

And lucky me! Another Favorite Book Read in 2014.