This week's panic about teens is reflected in two articles, NPR's Why Aren't Teens Reading Like They Used To? and Time's Study: The Number of Teens Reading for Fun Keeps Declining. Both are based on Common Sense Media's research, Children, Teens, and Reading.

Disclaimer the first: long time readers of this blog know I'm suspicious of Common Sense Media, dating back to the early, biased reviews. I'm skeptical of a set up that says, if you don't agree with their ratings, or research, you don't have "common sense" and there is something wrong for not agreeing. That said, with the corrections to the earlier reviews, I do pass along the website to those parents who want to count curse words and kisses.

Back to the research and the news stories. I wish there had been more thought put into them. 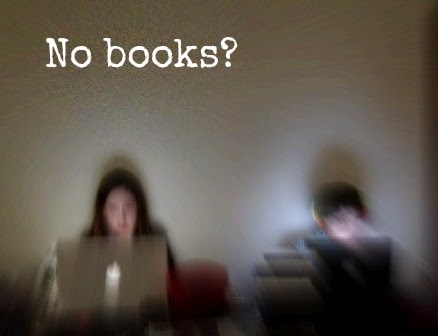 I have little patience with "the kids, they are not reading like they used to" because any type of dismissal of teens today has to be done by selecting a time period and socioeconomic section that is selected to make today's teens look bad. The article, 120 Years of Literacy (the National Center for Educational Statistics), explains that "However, in the late 19th century and early 20th century, illiteracy was very common. In 1870, 20 percent of the entire adult population was illiterate, and 80 percent of the black population was illiterate." Or let's go up in time a bit, to 1940: "In 1940, more than half of the U.S. population had completed no more than an eighth grade education."

According to the History Channel article on Child Labor, in 1900, 18% of all American workers were under 16.

These types of reports can never go too far back in time if they want today's teens to look bad, because the further back you go, the less literate the population was, the less time teens had for recreational activities, and the less access people had to books. (In terms of access to literature and the cost of books, see The Smithsonian's How the Paperback Novel Changed Popular Literature.) (And then there is the history of public libraries in the US, and reading and literacy.).

Let's say, for the sake of argument, the thesis is true: kids read less now.

Common Sense Media reaches the conclusion that the fault is in "reading environments" -- "electronic platforms on which children read also hold a host of divisions that are only a click away."

From NPR: "The studies do not say that kids are reading less because they're spending more time online. But [Jim Steyer, CEO and founder of Common Sense Media] is convinced that's at least part of the answer."

Time gives a nod to another possibility: "The decline in reading for fun is most easily explained by technological advances (i.e., kids would rather text than read), but education could have something to do with it as well. It’s no surprise that 53% of 9-year-olds read for fun every day, but only 19% of 17-year-olds do. Yes, the teenagers have more Instagrams to post, but they also have more homework to do."

Common Sense Media looks only at studies other groups have done on time spent reading, not on "why". Their report only talks about one possible reason: electronic distractions. (And in talking about ebooks, Common Sense Media does not acknowledge that ebooks have given the print disabled access to books they otherwise wouldn't have.)

Here is a quick list of some of the other reasons teens today may not be reading as much.

What most of these have in common? They are things beyond the control of a family; and they don't have to do with ereading and devices.

One last point. And I say this as someone who loves reading and books.

When it comes to kids and recreational reading, here are the questions I have. Look at those readers from 30 years ago. Look at them now. Do they have better jobs? Are they earning more money? Did they go on to higher education? Are they happy? In other words, does reading for pleasure mean anything other than.... someone likes to read for pleasure?

I think you've pretty much nailed a lot of the reasons teens may not be reading as much (if that is even true overall). There are days my kids barely have time to sleep, much less do anything recreational - between homework and extracurricular activities. And as far as kids preferring to text instead of read-- you can actually read while having a text conversation - but teens used to talk on the phone for hours - that didn't leave much time for recreational reading either.

I heard the NPR piece and was also struck by its lack of depth of research. The "report" by Common Sense media sounded very flawed to me and I was surprised and irritated that NPR picked it up. Reading your post, however, put me in mind of a segment on Science Friday from a few months ago. I know it doesn't address reading in teens, but it does deal with the need to stop vilifying teen use of technology, which I think is what this Common Sense media report is trying to do. http://sciencefriday.com/segment/02/28/2014/on-social-media-the-kids-are-all-right.html

Yeah, I share your immediate suspicion against anything Common Sense Media puts out... this sounds like incomplete research, and I think the fact that there's a lot more to do - and more venues in which TO read, their statistics are skewed.

SUCH a good post. Everyone so loves leaping aboard the bandwagon of "things were better in the old days, kids today don't [fill in the blank], technology ruins everything" that I guess it's easy to overlook the details and logistics of what you're actually saying and what the studies you're citing are saying.

Because, yeah. Reading is great (for me), but there are many hobbies that I don't do and feel fine about not doing. I'm sure for a lot of people, reading is just one such hobby.

Some kids are turned off by reading because of what they're required to read in school. Not every teen can wrap his or her head around "Catcher in the Rye,” "Grapes of Wrath,” or “Silas Marner” or whatever doom and gloom book the curriculum demands.

It’s a brilliant teacher who figures out what kids want to read and encourages it. They (the teachers) will probably be slammed by the school board or whatever, but if it gets reluctant readers reading, so what?

Fine ... bring it on, and discuss it in class. Buck the system!

Get kids to exercise their reading muscles on whatever works -- cereal boxes, billboards, FB posts, tweets. Then talk about them ... in class. It’s all about words on a page, a story.

I speak from experience. My two older children were (and still are, as adults) avid readers; my youngest, not so much. At least, not till I figured out what interested him (readingwise) and provided it (we took turns reading pages aloud from "Born Free" and a biography of a WW II fighter pilot) … something his school was not doing. They had a curriculum, dammit, and they had to stick to it. I feel sorry for teachers, hampered this way. I feel even sorrier for the kids who’re stuck in this system we call public education.

Incisive, balanced, thoughtful...Thanks for this. I'm quoting you and linking in my May Barking Planet Blog
Robert McCarty

Stray thought: as Walter Kerr was pointing out around the time I was a child, boundaries between work and pleasure have been blurring more and more since WW2. It's a rare adult who even complains that "networking" means "the economic side of my life makes the social side of my life spend my party time working," and good luck finding a white-collar job where you never have to do any work over lunch (again, once an almost sacred time) or spontaneous partners for a casual board game at the coffee house or pickup sports in the park. Ordinary pleasure itself has been subordinated to purpose.

Once upon a time, reading was frequently an escape from purpose and from "having to" anything. I wonder how many kids out there have ever read just to read, as opposed to putting in required time, filling out reports, or being kept quiet while waiting?