I enjoyed doing Flashbacks to what I reviewed in the past, but I got out of the habit, unfortunately.

So, now I'm playing a bit of catch-up. So, I'm concentrating on recaps of what I reviewed two or more years ago. 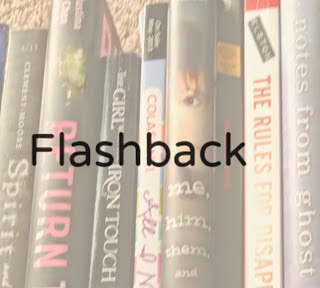 by Joseph Monninger. My review. "two teenage girls go on a road trip, and there is no text or subtext that this is something dangerous that girls shouldn’t do; that the girls need to do x, y, or z to ward off dangers, as if it’s the responsibility of the girls not to be victims. When I got to the end of Finding Somewhere and realized this — that Hattie and Delores are not victims, are never victims, are not victimized to make a point or to show their power, I was overjoyed. It may be silly to be happy about what a book is not, but there it is — this is about two girls who are strong and funny and beautiful. And they are that way from start to finish."

by Judy Blundell. My review: "After reading Strings Attached, you’re going to want to some of the great films from the late 40s and early 50s. Blundell recreates that New York world, so well you think you can open a door and step into it. It’s in the little details, of the clothes, the food, the hair. Kit manages to be of her time, but also “modern” enough to be identifiable to the modern reader. She has a dream, she’s chasing that dream, but she also loves a boy. As for the dream chasing, it’s not like she’s doing something unthinkable at the time; many young women went to New York with similar dreams of fame and success."

by Beth Revis. My review: "the ship Godspeed is a world of its own, both as a physical place and as an entirely new culture. While Amy, her parents, and others are sleeping through centuries of travel, others take care of the ship and prepare for the colonization. Amy awakens into this world, a world radically different from the world she (or the reader) knows. She is alone, awake fifty years before she should. It turns out, she cannot be refrozen: instead of waking up with her parents, she will wait, alone, and when they wake she will be older than her parents. Both her mother and father are needed for when the the ship arrives at the planet, so neither can be unfrozen now. Ironically, Amy did not have to go with her parents; she could have stayed back on Earth with family. Instead, she gave up her life as she knew it to stay with her family. Now, Amy doesn’t have them. She is alone; and only Elder offers friendship and understanding."

by Guadalupe Garcia McCall. My review: "At the beginning of Lupita’s freshman year at high school, her mother is diagnosed with cancer. Mami has always been the one who held their large family together. Lupita, as the oldest, has always been responsible. Now even more falls on her shoulders. Like the mesquite, Lupita will survive and grow stronger."

by Kathleen Flinn. My review: "Cooking! Flinn, who studied at Le Cordon Bleu, sees a woman in the foodstore stocking up on preprocessed and frozen meals and convinces her to try a few easy, simple substitutes. This leads her to wondering people don’t cook more and why they rely on prepackaged food; Flinn then puts together a group of people who don’t cook, for various reasons, and conducts a series of lessons starting with the right way to use a knife. Will they be transformed into fearless home cooks? Will the reader be?"

by Elizabeth C. Bunce. My review: "Digger/Celyn is fascinating; a girl who has taken care of herself by being a pickpocket and thief. A girl who hides many things: who she was before she became a thief. Who she is now. Digger has only two loyalties: to Tegen, her partner, who died in that ill fated robbery; and to herself. She is smart, she is talented, she takes care of herself. Meeting up with Meri and her family changes that. Meri, four years younger than Digger, is so trusting, so nice, so sweet. Meri’s family, too, accepts Digger. No; they accept Celyn, and her story of running away from a convent. That should have been a clue, that Meri’s family was willing to take in a runaway from the religious faction controlling the country. I have always had a soft spot for stories about thieves, especially those who turn out to have a heart of gold. Bonus points when the thief happens to be a girl."

The Name of the Star (The Shades of London)

by Maureen Johnson. My review: "Rory Deveaux is spending her senior year at Wexford, a boarding school in London. Meeting new people, figuring out a new school system, being in London instead of a small town in Louisiana, should be amazing.  And it is — except for the murders. Murders that are mimicking the infamous 1888 Jack the Ripper murders. Rory and her fellow students try to get on with life and school; all that changes when Rory sees someone suspicious by the school, someone the police think may be their Prime Suspect. Someone only Rory saw. Is Rory at risk?"

Froi of the Exiles: The Lumatere Chronicles

by Melina Marchetta. My review: "The Lumatere Chronicles (Finnikin is the first book, Froi the second): a rich, fully detailed fantasy series where war and elite power games have left scars on both the land and the people. For fans of Megan Turner Whalen. Also, given the ages of the main characters (late teens), these fall into “crossover” territory: bookstores and libraries would serve their readers by putting this in both the YA and adult sections."

Email ThisBlogThis!Share to TwitterShare to FacebookShare to Pinterest
Labels: flashback