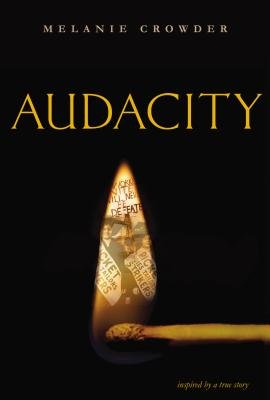 The Plot: 1903, Russia. Clara Lemlich is a young teenager, yearning for education, for the words and knowledge on the page, for what they can bring. She dreams of more. Perhaps she could go on to school or university, but those are dreams beyond the possible for a young Jewish girl.

Over the next six years, her life changes in ways she couldn't imagine. A violent pogrom pushes her family to take the long journey to America, and when she hears that education in free she dares to hope for herself. Those hopes are too big: she is from a religious family where the men are scholars and the women work, and so Clara finds herself working in the New York garment trade, in a sweatshop.

Clara's own experiences as a girl told what to do and what to think, combined with the abuses and injustices she sees at the sweatshop, combine to forge a woman who demands change for herself and others.

The Good: This novel in verse is stunning and spectacular, based on the life of the real Clara Lemlich.

I like historical fiction that shares a story I didn't know; and while I was vaguely familiar with the story of the unions in early twentieth century New York, this gave a new and fresh perspective. The story of a young woman who worked in the sweatshops and knew that she and her co-workers deserved better. She knew that being women, being teenagers and young women, being immigrants, speaking English poorly or not at all, were not reasons to treat those women poorly -- to force them to work seven days a week, ten hours a day, with no breaks for the toilet, in unsafe conditions, with clocks manipulated to over-work them, to subject them to sexual harassment and unwanted touching.

And that shows the second thing I like about historical fiction: yes, it shows us a specific time and place in the past but it also tells us something about the present. It's a reminder that the protections in place for employees are not something that happened because employers were generous and kind; it did not happen because individual employees successfully argued for and negotiated terms and benefits for themselves. It happened because of unions; and it happened because people stood together, even at great personal sacrifice.

The back matter in Audacity reminds people that the abuses lived by Clara and others are still being lived by workers. It may also help readers to look at today's news and reports on labor and the workplace and benefits and working conditions, and wonder, what do I want my workplace to be like? What can be done to make that happen?

One last thing: I really liked how Audacity worked as an story in verse. Telling a story in the past requires details and world-building, and I was particularly impressed that Audacity showed me life in a shtetl, in a New York City tenement, in a workhouse, all with just enough words.

Oh, two more things. First, after reading Audacity (which is the story leading up to the 1909 Uprising of the 20,00 strike), read Flesh and Blood So Cheap: The Triangle Fire and Its Legacy

by Albert Marrin (my review), which is the story of the 1911 Triangle Shirtwaist Factory Fire.

Second, this is a Favorite Book of 2015. And I really hope I see it on a lot of best lists.

Coinkydink, I'm reading it right now! I'm of two minds. If a book is in verse I want to know WHY -- why'd you choose this format? Do these poems work as poems, or are you just utilizing sentence fragments and line breaks and calling it art? So far I can't decide. I also want to know (and I'm hoping the afterword will tell me) how much of this is "true."

Typically I don't care about whether a book works as "poetry" for books in verse (but that said, when its a real poet, like Marilyn Nelson or Helen Frost, I really admire what is done) -- I look at it as just very stripped down, get to the point, chapters. It's not quite poetry; but I think it's more about using the shortened sentences to emphasize things, get to the point, not get bogged down with details and descriptions. I tend to think something like AUDACITY is not seeing itself in the same category as THE BRAID.