ALA began with a bang as those kidlit/kidlitosphere bloggers, friends and family members met for dinner at the Sun Ray Grill, a great restaurant near the Convention Center. (Meeting up was funny, as we tried to find each other in the Convention Center; thank goodness for cell phones!) We shared appetizers: spring rolls, crab cakes, spinach & artichoke dip. I had the pasta special which was wonderful. And we had a special guest, the amazing Linda Sue Park. I know! How awesome is that. It was a wonderful dinner, as we all chatted as if we had known each other for ages. And before you say, d'uh, you know each other from the kidlitosphere, remember, we were a mix of bloggers and nonbloggers, writers and lurkers. But there was no awkwardness, just excellent company, and a wish that we could have stayed talking for hours. 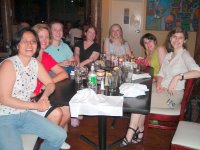 After dinner, we made our way to the Booklist What's So Funny presentation, managing to miss Mo Willems.

The next morning, I overslept so missed the Penguin breakfast. The morning was taken up with Library stuff, and in the afternoon I collected galleys and got books signed (half of which have been lost, apparently, by the post office.)

Saturday night, I attended the Little, Brown dinner at the W, with authors Gail Giles, Kirsten Smith and Trent Lee Stewart. (Way cool hotel, I am jealous of those who stayed there.) I am proud to say that I didn't embarrass myself in front of Kirsten by asking her if she has met Heath Ledger and what he is really like; and I did embarrass myself in front of Trent by saying I didn't read grown up books.

Monday was a trip to Hancock County and the Printz Awards at night. John Green spoke first, because he had the flu; and was very funny. Marilyn Nelson spoke via videotape about the process of writing her book. Elizabeth Partridge and Margo Lanagan spoke; Margo was particularly moving and inspirational, because she spoke about having to take a job to pay the bills as she was writing the short stories that became Black Juice. I think she also had the funny line about the Printz: it's like the Newbery for Young Adults. Markus Zusak stole the show, tho, with his videotaped remarks which was actually a SNL like skit that included my favorite line, a person yelling at him "but the ending [of I am the Messegner] was rubbish!"

At the reception, I met Margo L. to say "hello" and also met Scott Westerfeld and Justine Larbalestier , who are possibly the two coolest people in existence. Embarrassing moments in front of authors: saying I hadn't read The Book Thief yet because it looked too long; reading the end of book so I know that the person I like doesn't die; and the not embarrassing moment of telling Justine L. I love her blog.

My only complaint about Printz: the people who attended were great, the authors were awesome, the members of the committee so hardworking, so WHY is the Printz and YA still treated like the redheaded stepchild? The buses had stopped running, so we were on our own getting there and back; it's a desert reception, not a banquet; and even for the deserts, they ran out halfway thru and then the next thing, tables were being cleaned, tablecloths taken off, and we were being hurried out of the room. It's especially appalling because this award, unlike others, is truly international in scope.

Liz, I am glad to see that I am not the only one that managed to lose a pack of books. I hope it shows up eventually, it had some good ones in it.

I wanted to take a minute and thank you and everyone for a great start to my first ALA conference. Meeting Linda Sue Park was such a great suprise. For me it was like meeting a rock star!

To show you what a bummer it was to come back to my very specialized academic job, I was bouncing up and down about meeting Mo Willems and Linda Sue Park along with many other cool authors, and no one saw what the big deal was.

Here is hoping by next year I will be in a library.

It had been totally rewrapped in plastic, and it has obviously ripped, but like the first one there was no note, and I didn't make notes of what went in what envelope, but the important stuff was there....

(and obviously, such a nerd.)

It was so much fun meeting everyone "for real," and meeting authors is such a kick. I've had a few people where I've had to explain to to them. sigh. But it's still cool.

Hey - just saw this post on the Carnival - must have missed it the first time around. Excellent summaries! Btw, you're allowed to name/link me (at either blog), if you like - I think I gave the impression that people weren't, which was probably misleading - although you don't have to, of course. ;)

Btw, I have a photo from ALA for you - will have to paper-mail it to your library because I still lack a digital camera. :P

Lovely heartwarming post, I wish you all the best. best, Alice