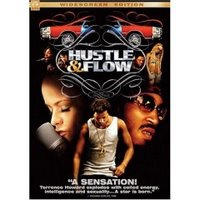 The Plot: A pimp rediscovers his dream of making music.

The Good: Oh and first: let me state the obvious. Not a kid's movie. Not a teen movie, though there may be teen appeal.

It's a good thing I don't listen to my own opinion. Often, there are books or movies that I think I won't like, and it turns out that not only do I like them -- I love them.

Luckily, I've gotten to the point that I realize in certain circumstances I need to put aside my initial reaction and read a book or watch a film. If a friend is raving about something, or an item appears on a list or a nomination, I add it to the pile.

I was prepared to dislike Hustle & Flow because I read the brief descriptions and thought uhg. I don't want to watch something that glorifies a criminal lifestyle, especially the type that preys on others -- drugs & prostitution. I don't want to see women objectified and used; or even worse, have a film that argues that prostitution is good.

I was wrong. Forget the description; but let me point out that DJay can barely pay his bills and is not living large. He's on the bottom rung of criminal life, doing a bit of this and a bit of that to get by, and that is all his life is about. Finding the money to make it through today, forget tomorrow.

Why this is a great movie, and I recommend it to you:

It's about dreams; not just dreams, but dreams that are rediscovered. Not everyone knows what they are going to do at 15 or 16 or 17; or sometimes someone knows, but it's more a hope or a wish, and they get sidetracked. DJay got sidetracked, into easy money, helped along by family members already in the criminal life. Fast forward 20 or so year later, and DJay appears to be beyond those old dreams. Yet this film shows that its never too late to dream; you may wake up and think, this life is a nightmare, but it's not beyond changing.

Speaking about nightmares, this movie is also about dreams. It's DJay's story, so we know little about the women in his life. But his dream is to become someone other than who he is.

It's about the creative process. DJay wants to make music, and gets the sudden realization that he can make music and he can make money doing it. So the film also shows him putting together the people, the equipment, writing and rewriting, getting feedback, getting angry and frustrated.

Finally, it's about redemption. DJay wants to change; wants to be different; isn't always sure how. He wants to be a better man, but he's in a world where there has been no guidance. It's no big surprise to find out that he began as a pimp by assisting his uncle in collecting money. He had no role model, and drifted into this life, and now is trying to change.

Over at YPulse there was an interesting discussion of whether this film glamorizes pimps and demeans women. While I agree that there's something going on in society right now that is disturbing in terms of sexuality, women, and especially teenagers, when it comes to actions, dress, and the like, I still think that ultimately that's not what happened in this film.

Finally, the movie is about making music, and it's not the type of music that I usually like. I found myself liking the music, and still find myself occasionally humming the Oscar-winning song, "It's hard out here for a pimp."
at July 20, 2006

I've heard this one is good! Thanks for the review.

I really enjoyed this movie, too -- way more than I thought I would, but I had trouble with the ending. While the whole film did seem to possibly be going for a redemptive-power-of-art theme, he wound up in jail for a violent crime, and that last scene seemed to me to be implying that this new world of music was just going to be a shinier version of pimping for him.

I don't know. I liked the film, but it also troubles me.

The ending didn't bother me because I thought the jail time was needed to show that there are consequences to the life style that DJay was living. I was relieved that jail time was relatively short, so that it wouldn't overpunish & destroy DJay's dreams/hopes as represented by his new music career. The song getting local airplay showed that he did have a chance; his dream was possible; he didn't have to stay stuck in his criminal lifestyle. His life would be the result of his own choices, not someone else's choices. The use of blond girl to "sell" his music did parallel his pimping, but it being legal made a difference to me, as did her ability to do something well that didn't involve selling her body. That the actions of DJay & the 2 women didn't involve criminal activity was a big factor for me liking the movie.

Overall, I never saw it as particularly about the power of art; rather, about people who thought they had no choice exercising that choice.