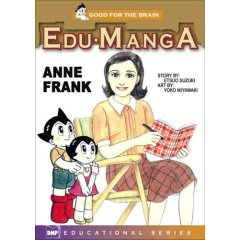 Before I read this, I thought, you're kidding me.

Having finished it, my thought remains the same. (I don't have the copy with me. It was returned to the library.)

Has anyone read this? Yeah, yeah, I don't do negative reviews... but Anne Frank? And Astro Boy? And the rather interesting, to say the least, time line at the end, and Japan's role in World War II? (Like they mention Japan building the Burma Thailand railway and omit how it was built.) And while a couple of parts made pause and want to pull out the original diary and also some of the books about what happened after the family was arrested, I just don't have the time.

There's always the chance I'm overreacting.... I'd love to hear from someone else who has read it.

This ranks right up there (or should I say right down there) with the upcoming popup book about the Irish Potato Famine...