Fear and Fiction: The Power of Children's Books and the Inner Life of The Child, Part I 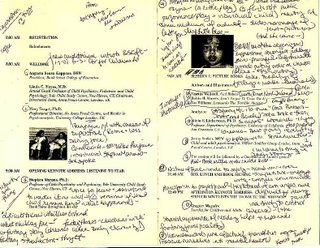 This is an example of my frantic efforts to take notes during the Fear and Fiction conference. And now I get to try to decipher those notes! Apologies to anyone who is misquoted; and to the extent I found a relation to libraries and librarians, I will post over at Pop Goes the Library. Finally, rather than making you all wait forever for the entire report, I'm going to break it up into different parts.

The conference was sponsored by the Yale University Child Study Centre and the Anna Freud Centre, and was held on Saturday October 21st at the Bank Street College of Education in NYC. Hopefully, there will be a similarly sponsored UK event in October 2007, called Fiction, Feelings, and Imagination: The Power of Children's Books and The Inner Life Of The Child. Start saving now!

I attended the conference with a friend of mine, Priscilla, and we met up with Susan of Chicken Spaghetti (her report is here.) Monica Edinger of Educating Alice was also there, but alas, we didn't connect; Monica's report is here.

So a Freudian, an author and a librarian walk into a conference... All I can say is I loved it, and I don't think I can ever be accused of over-reading a book again. I felt quite at home as the analysts examined the books and the meanings and messages found therein.

The day started at 8:00 (I know!) with coffee, and the welcome at 8:30. Augusta Souza Kappner of BSC welcomed us; she was followed by Mary Target, Ph.D. of the Anna Freud Centre. Target said that Robie Harris and Lois Lowry were the driving force behind the conference; and she introduced the opening keynote speaker, Steven Marans, Ph.D. (at this point I am almost compelled to say I am Liz B., MLIS, JD.)

Marans spoke about story and books offering a voice for children's fears, as well as providing a way to master fear. Using his own recollections of childhood, he mentioned a traumatic event (watching a raccoon shot by the ice cream man) that he remembered very differently (the raccoon being rescued by the fire department.) Marans said that it "is difficult to know what lies behind what children fear," spoke about fantasy, noting that children's "work is fantasy play."

The morning session (picture books) began with Martin Waddell and his Owl Babies. Waddell described the origins of the story (seeing a young child crying for its mother at a local store), read the story with full dramatics, and discussed the pictures and how they added meaning. (It wasn't until afterwards that I realized that while this is pretty much the norm for how we "book people" look at children's books, it may have been the first time that the "Freudians" heard such observations as the book should be read as a play, with different voices for the owl babies and mother.) Waddell did a similar (but shorter) walk thru of his Can't You Sleep, Little Bear? (At book signing time, Waddell had the longest lines; I'm not sure if it was because of all his books or his awesome accent.)

Next up was Robie Harris and Don't Forget to Come Back! Harris addressed how picture book can help express a child's strongest fears; giving power and legitimacy to these fears; and that words put order on chaos. You can take terrifying feelings (being abandoned by parents) and make them bearable.

Next was Mo Willems and Leonardo The Terrible Monster. Mo was Mo; in other words, awesome. He's the children's book writer most likely to get his own talk show. He was original, he was funny; he said about his own book that he didn't think it was about fear, so "oops." Echoing Waddell, Mo agreed that for picture book writers, "everything is a play -- we're screenwriters."

Next came the analysts who discussed these books, Alicia F. Lieberman, Ph.D (I wonder if any of the authors have advanced degrees but they were just omitted?) and Jenny Stoker, M.S.W. I'm sure it must have been interesting for the authors to hear their works dissected in such a way. Lieberman noted that we learn more effectively thru the arts than in other venues, and thru art we can rescue ourselves into mental health. Stoker addressed the nature of fear and a child's route to safety, by reading the same book over and over. And over. That this repetition allows the child to control his environment and provides a safe place for her fears; also noting that the shared experience of reading helps to separate fantasy from reality.

During the question and answer period, there was the classic did you know what you were writing about when you wrote it question; here, of course, the context being did you know you were writing about all these high falutin psychiatry/psychology thingees as you were doing it? Or did it just happen? Now, on the one hand I love these questions because I like learning about why a story gets written; and I also am intrigued about how that story is shaped. On the other hand, I think these type questions brush close to asking an author whether they are being didactic & writing specifically to preach a message OR are you writing a story la la la with no idea that it's anything more than a story, and nothing is ever that black and write (unless you're a celebrity author.) The authors responded with a yes/no; of course, things don't just happen; but no, the main point, the main objective, is to write a children's story, from the children's side, not to tell a message.

To be continued, after a box lunch with yummy cookies and plenty of time to get books signed.
at October 25, 2006

Sounds fantastic. Wish I could have been there.

Love the line about my buddy Mo as "children's book writer most likely to get his own talk show." So funny, and yet true.

Thanks for the report.

What a fantastic report! I love how you, Susan, and I each gave the conference a slightly different slant depending on our own particular interests. I actually was very interested in that classics discussion at the end and thought the Oedipus remark was pretty wild! Sure made you remember that we were with a bunch of Freudians, didn't it? (Hmm...I think perhaps they should have had Jack Gantos there to really stir the pot!)

The conference sounds marvelous. I think you have a book winner with "Eddy" and the discussion reminded me of the last of the Series of Unf. Events books, in which Sunny, who makes her remarks often as literary allusions, says "Elektra" when it fits the bill--I wondered how many kid readers got that one?

Also, I love reading Owl Babies out loud. The pictures are just fantastic.

I'm impressed by the company you keep.