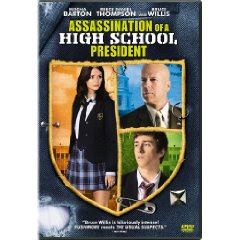 The Plot: Bobby Funke, sophomore, journalist for his High School paper. An assignment to profile the school president becomes something more when the SATs are stolen. Don't worry; Funke is on it!

The Good: A black comedy; Funke narrates this as if he is a New York Times reporter, tracking the big story. Pretty much everyone is a target. If you're looking for who is "good" or who is "bad", who is "right" or who is "wrong," look elsewhere.

While not as sophisticated and dark as Brick or Election

, it's still an entertaining and occasionally insightful look at high school as representing all the worst of real life. (Seriously, when people say something is like high school, is it ever in a good way?)

Unfortunately, the big mystery (who stole the SATs) is pretty obvious to at least this viewer, even though the why was fuzzy until the end. Still, it was good to see the investigative process Funke followed as he got to the point of knowledge, and, dare I say, wisdom.

I consider myself a fairly big film fan, but I've never even heard of this movie. I'm guessing there might be a reason for that! I could track this down on my own, but does Willis play a major role, or is more of a cameo?

Anyway, I noticed you mentioned BRICK. It's one of my favorites. I'm surprised it's still such a sleeper. Every time I mention it, it seems like nobody's ever heard of it.

Willis has more than a cameo; he's in a good number of scenes, but he's not the star. I enjoyed his performance; while a bit more out there than the main

Apparently this got good reviews, including at Sundance in 08, and feedback at film festivals but then its distributor declared bankrupty and it went into limbo. So one of those films that just had bad luck.