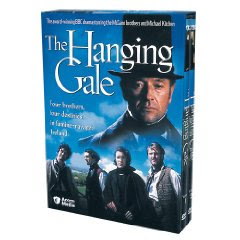 The Plot: 1846, County Donegal, Ireland. The Phelan family struggle against the Irish Famine and the English policies and politics that turned a potato blight into deaths of one million men, women and children.

The Good: OH MY GOODNESS. This miniseries was so, so good; and not just the acting, which was great. When I saw this was made in 1995, I was surprised because it didn't look old. The production, the cinematography, the clothes, the hair -- none of it feels dated (and we've all seen the historical television shows and films that are terribly dated).

How much did I like The Hanging Gale? I went looking for fanfiction. For some of you, that is all that needs to be said.

Two of the Phelan sons are farmers; one a priest; one a teacher. This covers various bases and points of view; and the Phelan brothers are played by four brothers. the McGanns. Who, to be hopelessly shallow for a moment, are all quite good looking.

As things go from bad and worse, the question isn't whether someone will die, but rather when and how. Emigration (forced or voluntary) is also a possibility. Obviously, someone has to survive -- people did. But the Phelans are farmers, those whose lives were entirely dependent on the potato crop. The repercussions of the crop failure and English reaction (and inaction) is played out over four heartbreaking episodes as the Phelans lose the little they have. 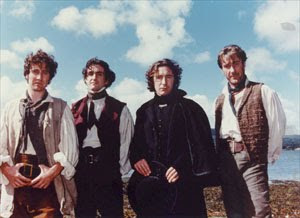 One of my pet peeves about American fiction about the Famine is that the book always ends with the family leaving Ireland for the promised land of the United States. So I was very interested in watching a production that was without American involvement and bias. This is a BBC Northern Ireland production, with the acting brothers (Paul, Stephan, Joe and Mark McGann) from Liverpool; Stephan and Joe are the ones who originated the idea, so I went in hoping that this wouldn't end with the "happy ending" of US emigration.

In The Hanging Gale, by the time emigration happens, it is shown as being far from happy, but just a cheaper way than the poorhouse for English landlords to get the empty land they want. Those who left didn't go seeking something better; they were leaving. The ending ... this is not an American miniseries. The ending proves that.

I went in knowing about the Irish Famine; when I began searching via Google for additional information about this miniseries, the most shocking comment to me was people saying they didn't know about the Famine until they watched this miniseries. I also knew that 1847 is considered the worst year of the Famine, so that the bad times at the beginning were only going to get worse.

Want a gripping historical drama that manages to convey actual historical information while being historically accurate* and is also, quite simply, a great film with good acting and plotting? Watch this. And wonder why there isn't more out there about the deaths of a million people.


*I am not a historian and do not play one on this blog. My assessment of the accuracy is based solely on my armchair reading; and realizing that some things had to be tinkered with, such as language, etc.

Who cares about historical accuracy: it's got Mrs McGahan's lovely sons! All of them! Swoon! (It was good, I remember the series well. Must revisit it.)