Reviews that originally appeared in the 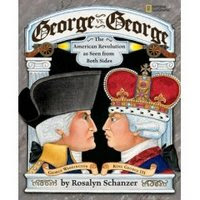 April 2006 issue of the now-gone The Edge of the Forest.

George vs. George: The American Revolution As Seen from Both Sides

George Washington, Spymaster: How the Americans Outspied the British and Won the Revolutionary War 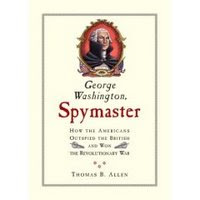 Originally appeared at The Edge of the Forest.

George v. George compares the two most visible people on each side of the war, both named George: the American George Washington and the English King George III. Schanzer initially focuses on these two individuals, but then expands to compare the American and British views on everything from politics to methods of war. The approach results in a balanced view of the American Revolution, explaining such things as the structure of Colonial government and taxation. Particularly impressive to this American is how Schanzer conveys how the British viewed the American guerilla warfare as dishonorable.

In any conflict, there are two sides to a story. Books that show historical events from one side, painting the other as "them" and "wrong," can lead a child to wonder at how stupid those "others" were to not agree with "us." Schanzer, by providing balance in the arguments, is not looking to persuade the reader to agree with either George; rather, by providing the point of view of the "other," she allows the reader to see the war from a different point of view. This is about understanding another's position.

The color illustrations are reminiscent of 18th century political cartoons; so while original to the text, they convey a time period appropriate feel. At the same time, there is a modern, kid-friendly feel.

As the title indicates, George Washington, Spymaster, uses George Washington to highlight the value of information in war. This isn't a book about the life of George Washington; and it's not a book about the politics and battles of the American Revolution. The focus is what each side needed to know (and didn't want the other side to know) before the battles to try to ensure victory. How many soldiers are in the camp? Are they well fed? Where are they going, and when? What are the battle plans? Who is the commander?

Because of the secrecy required, many agents (and double agents) were not publicly known; Allen relates exciting stories, including one man who was believed to be a Loyalist and who almost burnt out of his house by angry Americans; it turns out that he was a double agent! Due to the lack of documentation, and the continuing risk to family members even after the war, some individuals went to the grave with the truth about their activities unknown. Allen does a marvelous job of pulling together information from various sources, from original documents, newspaper accounts, and family legends, and weaves them into an exciting story of intrigue.
Allen includes samples of different spy codes used during the American Revolution; sprinkled throughout the book are secret messages for the reader to decode. Like Schanzer, Allen pays attention to the details; even the font used in the book is historically accurate.

Email ThisBlogThis!Share to TwitterShare to FacebookShare to Pinterest
Labels: National Geographic, reviews, rosalyn schanzer, The Edge of the Forest, thomas b allen

GW Spymaster sounds exactly right for a child at the age where his interest/comprehension is more advanced than his reading ability. I will look for it for my nephews who are big history buffs.