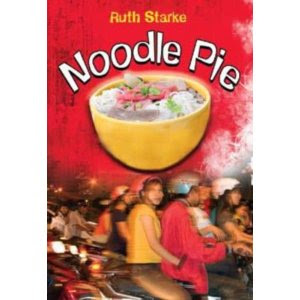 The Plot: Andy, eleven, travels with his father to Vietnam. His father left Vietnam over twenty years before, surviving multiple pirate attacks to arrive, penniless, in Australia. Andy is Australian; not Vietnamese. His father may be "going home," but to Andy, it's a strange country, strange relatives, strange language, strange food. Even his father seems strange in Vietnam, wearing clothes, a gold watch, no longer the frugal man Andy knows.

The Good: This book is a two-fer for American readers. It's a look at modern Vietnam, through the eyes of a child who is a visitor. It's also a look at Australia, with Andy missing such foods as meat pies. Meat pies!! Just as mysterious to most American readers as pho for breakfast is to Andy. (Pho, by the way, is noodle soup.)

I loved the depiction of the emigrant returning home. Andy's father left when he was teenager; it's twenty years later. Much has changed in Hanoi; much remains the same, and the connect / disconnect, familiar but strange experience is conveyed in the places and people Andy and his father visit.

Andy is Australian. He was born in Australia, his name in Andy. He also has a Vietnamese name (Anh) and can speak and understand some Vietnamese (he calls it Vietlish). Both his parents were born in Vietnam. Andy views and understands Vietnam as the foreigner he is; but has his father to explain what is different and strange to Andy.

Because we see things through Andy's eyes, the reader first encounters Vietnam as "the other" and "strange". Here is Andy, observing a street scene: "a skinny woman squatting over a charcoal fire or a few sticks of burning wood -- right there on the roadside, amid all the dust and refuse and traffic fumes. Andy was shocked. Where where the health inspectors?" Andy's thinking is very much that of an eleven year old, especially an eleven year old experiencing culture shock. Andy's attitude softens as he learns more about the cultural and economic differences between Vietnam and Australia. His attitude and reaction is balanced by occasionally seeing things through the eyes of his cousin, Minh. Andy may start by seeing Vietnam as "the other," but as the story progresses he matures past that, just like the reader will.

There is a great balance between what Andy figures out on his own, and what needs to be explained to him. Andy, for example, sees his Vietnamese relatives (and other Vietnamese) as greedy and rude, demanding and expecting money from his "rich Australian" father. Andy knows his father is a gardener, that both of his parents fret over bills. Yes, they have a house, a car, Andy and his sister Mai go to school -- but they aren't rich! How did his father afford this trip, all the presents? And then Andy discovers that for years, his father has been sending money back home to his family. Even though the family owns a successful restaurant!

It takes the book for Andy to realize and come to terms with the good fortune his immediate family has had, by being able to live and work in Australia. To truly understand the different standard of living, expectations, and challenges for those who remained in Vietnam. Some of that understanding comes from his father, explaining that the reason he was able to emigrate to Australia was that those relatives made tremendous sacrifices to come up with the money to pay for his passage and fare. Andy, in turn, learns that his father has misled his Vietnamese family to think he is richer and more successful than he really is. Noodle Pie is, among other things, the eroding of an us/them, good/bad, familiar/strange mentality.

Noodle Pie provides a fascinating look at emigration, at the role of the emigrant in the lives of those who were left behind and those who are part of their new lives. It is set in Vietnam, with tons of details about Vietnam, its history, its culture, woven naturally into the story. But, it could be true of any emigrant, any country, any time.

Andy's Vietnamese relatives own a restaurant. Andy believes it to be, well, a real restaurant; instead, it turns out to be little more than a cafe, where locals buy food and eat quickly. No menus, no napkins, nothing that Andy associates with "restaurant." The food -- the food is so delicious, its descriptions so strong, that I want Vietnamese food and I want it now. The recipes Starke includes in the book makes me that much more hungry. KOTO, a restaurant to help Vietnamese street children become skilled and employable, is mentioned; and so Starke weaves together the realities of street children, food, tourism, business.

Not to give too much of the plot away, but Andy sees his family's "for locals" restaurant and realizes if it was attractive to foreigners who have money to spend, his Vietnamese family would become better off financially. He works to make this happen with his two cousins, Indy (Hien), his age, and Minh, slightly older, combining their talents, knowledge, and cultures. The discussion of economics was particularly insightful. Andy at first thinks the family restaurant must make tons of money. Then he realizes how much is charged. Only later does he realize to factor in the cost of food. And the cost of labor. And what should be the price of the food? Foreigners can afford to pay more, so should they? But the locals cannot afford the higher prices. But, especially for a restaurant, the locals eat quickly and then leave while the foreigners take their time and linger. Should the pricing take that into account, that instead of four or six local seatings there is only one? What is fair? What is just?

The Acknowledgement section in Noodle Pie discusses the research that went into the book, including Starke's multiple trips to Vietnam and her Vietnamese advisers. Starke is Australian, and Noodle Pie was published in Australia in 2008.

Liz, first thing we do when you come to Australia is we get you a hot meat pie! And after that a sausage roll.