This interivew with Kirby Larson, author of Hattie Big Sky, originally ran in the March 2007 issue of the now-gone The Edge of the Forest. 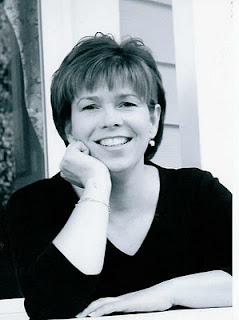 Hattie Big Sky by Kirby Larson is a story of dreams, survival, and hope; 16 year old Hattie Brooks is an orphan who at sixteen discovers that an unknown uncle has left her his homestead in Montana. It's 1918, and this is no Cinderella story. Hattie has to work hard to "prove up" the land in order to keep it. This book is both a straightforward story of a pioneer; it's also a look at family, as Hattie befriends her neighbors and at prejudice, as anti German sentiment turns to violence.

When I sat in the audience and heard Hattie Big Sky named as a 2007 Newbery Honor book; I jumped out of my seat. Hattie Big Sky is in some ways a perfect book: it works with almost any audience; it has a lot going on; and Hattie as a character stays with you long after the last page. I was also excited because a couple of days before I had met Kirby for the first time in person, and we had chatted over coffee at a Starbucks in Seattle. One of the things we discussed was attending the Youth Media Awards Press Conference, when all the winners and honor books are announced. Kirby also agreed to do an email interview for The Edge of the Forest.

Normally, an email interview is easier than a "real life" interview because you don't have to worry about traveling or time zones or things like that. Kirby lives outside of Seattle, I live in New Jersey. However, Kirby Larson is one busy lady! In addition to visiting Louisiana, she'd also been to a book festival in Missouri and was then heading out to New Zealand.

Sit back; enjoy your cup of tea (or coffee or hot cider, just please, don't spill on your keyboard); and get to know Kirby and Hattie a little bit better.

Liz: Hattie Big Sky, a work of fiction, was inspired by the story of your step great grandmother, Hattie Inez Brooks Wright. At what point did you realize that you were going to take Hattie's story and make it into a book?

Liz: Did you ever have any conflict as a writer between what was "true" about the real Hattie's story and what was needed to write a work of fiction?

Kirby: Because I had so little information about my great-grandmother's experience on the prairie, I was not constrained in any way by what "really happened." I don't know what "really happened" to Hattie Inez Brooks. But, because of my years of research, I do know what happened to many other homesteaders and I was able to weave these stories into a satisfying adventure in HATTIE BIG SKY.

Liz: Hattie Big Sky was named a Newbery Honor Book. How has your life changed now that that you have the silver medal on your book?

Kirby: The biggest change is in the number of emails I get every day! Honestly, I feel like the same writer as ever, working to write the best story I can.

Liz: Hattie Big Sky is a great "crossover" book; it crosses over age groups, and can be enjoyed by anyone. As soon as I finished it, I thought of a number of adults I wanted to give it to, as well as teens, as well as younger kids. Different aged readers can read it, and get something out of it. Did you have a particular audience in mind when you wrote the book?

Kirby: Please don't take this wrong, but I wasn't thinking at all about readers as I wrote Hattie's story. I was focused on telling her story as honestly as I could. I think the fact that it speaks to readers of varied ages affirms that that is the best tactic to take in writing any story.

Liz: I saw on your blog that you recently visited New Orleans. Could you tell us a little bit about your visit?

Kirby: I had been in Mississippi a year ago, helping with Katrina clean-up. It was good work but weary work because we were primarily mucking out peoples' homes. This time, we were helping to rebuild homes in bayou country, near Houma, Louisiana. It was so rewarding to help people get that much closer to living in their own homes, to get that much closer to moving out of those wretched FEMA trailers. It's a shame that people aren't in their homes yet; and I'm so afraid that one year from now, we'll be seeing the same photos, hearing the same stories, that we are right now; and that we heard this time last
year.

Liz: What are you working on now?

Kirby: Honestly? Being a Newbery Honor award winner. But, after that, I'm working on polishing up a nonfiction picture book inspired by my Mississippi trip, written with my dear friend and writing colleague, Mary Nethery. Walker Books will be bringing out THE TALE OF TWO BOBBIES in August of 2008. I'm also working on a middle grade historical fiction, another YA historical fiction and a contemporary YA novel, the first draft of which was written during November 2006 for National Novel Writing Month (NaNoWriMo).

Liz: Wow. We have a lot to look forward too! Thank you so much for taking the time to speak with The Edge of the Forest.

Email ThisBlogThis!Share to TwitterShare to FacebookShare to Pinterest
Labels: interviews, kirby larson, The Edge of the Forest