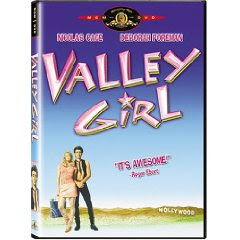 The Plot: Julie is from the Valley; Randy from Hollywood. These two teenagers meet and fall in love, but they're from two different worlds. How can it possibly work?

The Good: It works because, hello, Nicolas Cage is playing Randy. 'Nuff said.

Did I mention Nicolas Cage?

Actually, surprisingly, this is not Nic's film. Oh, yeah, he plays Randy the Romeo love interest; but this is really Julie's film. It's her friends we meet, her family, her home, her school. Ultimately, it's her decisions and choices that shape the plot, whether its Julie breaking up with her preppy boyfriend Tommy at the start of the film because she's unhappy or giving in to peer pressure to break up with Randy later, because she cannot stand up to the pressure from her friends to reunite with Tommy.

1983. Great music (I want this CD!); and clothes and hairstyle are used to show the difference between Julie and her friends and Randy and his clubbing life. They listen to records; use dimes to make phone calls; it's the hippy parents (who just got married last September!) who smoke pot, not their daughter. Oh, and don't let the "valley speak" scare you off.

In listening to the director's commentary, I learned that she was told to show naked breasts four times to ensure an R Rating.

Do I really have to say anything other than Nicolas Cage and Modern English's I Melt With You?

How about this: "When they attack the car, save the radio."

As a Valley Girl who was in college 3,000 miles from home when this movie came out, I thought the movie was, like, totally excellent.

One of my all-time favorite movies. (I was an actual Valley Girl when the movie came out ... in geography, not dialect.)

Debbie & Lisa, so glad to find others who share the love!

Melissa, it is so much fun. Especially when you remember things like sushi wasn't so popular/ easily available; and how different the cool kids are. Not one of the valley girls has her own car!

This is an old favourite of mine too. I think it's time for another viewing!

OMG, flashback from college. I went to see this in the theater when it first came out. Have to put it on the Netflix cue. I still sing along to that song when I hear it on my old-fogies radio station.

Makes me feel old! I was teaching when this came out and used as an example of a modernization of Romeo and Juliet. (Although I obviously didn't show it, since it has some rather racy scenes). It is a really good film though and a sociological snapshot.

The Netflix queue is one large now. I was very disappointed when I found we didn't have it anywhere in my library system. :(