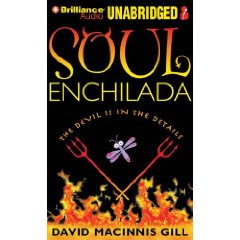 The Plot: Eunice "Bug" Smoot is struggling, pay check to pay check. She is fiercely, aggressively independent, working, paying bills, paying rent, no food stamps or government money for her. Her father was never in the picture; her mother died when she was little, followed by her aunt a few years. Most recently, her grandfather "Papa C" died, leaving her nothing except a 1958 Cadillac Biarritz.

It turns out Bug's grandfather also left her a heap of trouble. The car is about to be repossessed -- by a demon. Not only did Papa C sell his soul to buy the car -- he skipped out on the bargain, hiding post-death from the repo demons just like he hid from bill collectors while alive. As Bug argues the car is HERS, thankyouverymuch, she gets even worse news. Seems like Papa C promised additional collateral - Bug's soul.

The Good: Bug is fierce and independent, has a mouth on her, isn't afraid to stand up for herself. "Diplomatic" is not in her vocabulary. During high school, her aggression and drive found a use on the basketball court; now, she drives fast delivering pizzas. What is great about Bug's whole in-your-face persona? She's going to need it to take on the demon Mr. Beals. Playing nice, being quiet, being soft isn't going to save your soul. Literally.

Soul Enchilada is a perfect mix of humor and supernatural. The chapter headings are fun, and the supernatural world Gill has built manages to both scare you and make you laugh at loud. The threat from Mr. Beals and Scratch (the Devil) is very, very real. But you also have djinn hunters who track djinn and their visas (that is the ISIS, International Supernatural Immigration Service) and quick jokes such Judge Hathorne, whose "family has a long history of presiding fairly and objectively" over contests between the Devil and humans.

ISIS; right there, you know that Gill hasn't just decided to use traditional stories about the Devil, demons, djinn and the deals for souls. He's taken those traditions and added new, invigorating, original twists.

Bug starts the book alone, but as she discovers the supernatural world lurking beneath the real one she not only assembles a team, she becomes part of a family, including Pesto, the cute guy at the carwash who turns out to know all about djinn and demons; his mother, Mrs. Valenci, who opens her heart and home to Bug; Castor and Pollux, arguing ISIS agents. Part of Bug's aloneness is not just the loss of her loved ones. Her mother, Mita, was Latina; her father black. Bug is a mix of cultures, feeling not quite welcome in either, saying "I don't speak Spanish" when any Spanish is spoken around her.

The cast in Soul Enchilada (set in El Paso, Texas) is a diverse mix. Readers wanting action, horror, a smart story, and a touch of humor will love this; it's even nicer that the two main characters, Bug and Pesto, are teens of color.

Bug is quick to act; and accordingly, there is a lot of action in Soul Enchilada. Demons and djinn, people! Of course there is going to be action, with funny and unexpected twists and turns. At one point, halfway through listening, I thought "this is happening already? wow, what comes next, then." A plot that keeps me guessing? What's more a supernatural plot that keeps me guessing? I'm a fan of Poltergeist, Buffy, Supernatural -- I expect the twists and turns! So that Soul Enchilada kept me guessing? Bonus points.

I would love a sequel, just because Bug and Pesto are such a cute couple and Bug takes no prisoners. I want to see what she does next. But, since Soul Enchilada appears to be a standalone, I'll keep my demands simple and just demand another Gill book.

Michelle Carmen Gomez narrates the audiobook. Bug comes alive, as does Pesto and the other characters. Their "dude!" and "dog!" echo in my head and make me chuckle.

This looks great! I think I would read it based just on the cover alone. It's also nice to see something original and not all about the typical subjects of late. Great review!

Sometimes I can get to books on my tbr pile quicker when I listen to them. This was the case with Soul Enchilada. I just loved the voice of the narrator. It was a wild ride. And, you're right, it would be fun to revisit Pesto (great name) and Bug in a sequel.

I've been wanting to read this one for a while. Now it looks like I should pick up the audiobook - I need to listen to more audiobooks anyway.