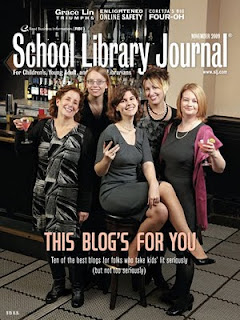 Very short version: a bunch of bloggers (including me) posed on the cover of SLJ (November issue).

See my recap at my post, God Grant Me the Serenity.

Many people (thank you all!) commented at the SLJ website in support of the cover, as well as in support of the idea that drinking is a legal activity and all the people on the cover are of legal drinking age and this publication is for adults, so what is the big deal?

Others commented that drinking is legal but just as wrong as smoking, having guns, or posing for Playboy.

Some of you wonderful people actually put pen to paper and wrote to SLJ (January issue), so now we have Letters to SLJ: Electric Boogaloo, with people both defending the cover and wondering at the original letter writers.

I especially like Patricia Verrett who says "perhaps giving the impression that alcohol and blogging are connected is erroneous, but aren’t we all adults?" Because yes, drinking while blogging usually does not end well. Ms. Verrett of Texas goes on to say, "The rest of us live in the real world, where a gathering of peers or connection by blog, with or without adult beverages of choice, are key factors that keep us motivated to serve students to the best of our ability."

If Ms. Verrett is at ALA Midwinter, I hope to be able to have a drink with her (whether it be wine, soda or water!), because she hits the nail on the head when it comes to blogs and librarians who serve children and teens: they keep us connected, which motivates us to be better librarians.* Though I'm afraid to let her know that in real life, my usual shoe of choice is either Dansko or Doc Martens.


*I also think that book blogging makes us better readers. But that's a whole other issue!

I really can't believe this was ever a controversy - or that it continues to be a controversy. (shaking head) It's not as if they are showing all of you drinking surrounded by children.

Some people need to get real problems. Just a thought.
I saw that cover and never even gave it a second thought. I can't imagine getting all up in arms about it!

I'm still shaking my head over the absurdity of this whole thing and agree with Lindsaygail - some people do need to get real problems!!!

Thanks, guys! And thankfully, my boss shares your attitude.

Part of my continuing fascination with this (other than its just me) is that when it comes to the b & c word (book banning and/ or censorship), we see these types of comments as to why books should not be on the shelf (Anastasia's father drinks a beer!: Anastasia books by Lois Lowry). And continues with other "legal but frowned on" activities (i.e., cursing, sex, etc). Except usually its not from librarians.

Liz,
Librarians are real people. No, actually, many of you are super cool people. Your critics need a cocktail and relax. I don't drink and I fail to see why your photo is inappropriate. You're clearly dressed for a good time outside of work.

I heard once of a hotel worker saying that ALA conventions were appreciated more than groups like the Shriners because librarians were less trouble and they drink more.