One Shot Recs Over The Fence: The Real Benedict Arnold 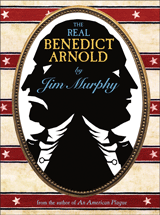 We all know who Benedict Arnold is, right? Even if some of us remember Peter Brady more than Benedict Arnold. (Can you believe I can not find that clip online?)

Murphy explores all aspects of Arnold's character, conduct, and history, to show not just what motivated Arnold's actions (including switching loyalty from the American to the British side) but also Arnold's significant contributions to the Revolutionary War before he switched.

I love non-fiction; but non-fiction, especially non-fiction for teenagers, doesn't seem to get the same attention as fiction. So when Colleen/Chasing Ray suggested that the criteria for selecting a One Shot Rec Over the Fence book be, "this is the one about which you'd say to friends and family, "YOU MUST READ THIS!"" I knew non-fiction would be the way to go. I picked Murphy's The Real Benedict Arnold not only to highlight this book, but Murphy's other nonfiction work, including An American Plague: The True and Terrifying Story of the Yellow Fever Epidemic of 1793

and Blizzard!: The Storm That Changed America

. (I haven't read The Great Fire

but I'm looking forward to it.)

The Real Benedict Arnold details the many battles and military actions Arnold fought in. I love learning more about history; like how Arnold was quite successful but had no military experience before 1775. Apparently, being involved with the Sons of Liberty so having some political connections, along with the wealth to fund oneself and one's troops while waiting for payment from the Continental Congress, were the important criteria for military membership. Not to mislead about the wealth -- Arnold was, indeed, born to wealthy parents; before he was twenty, that money was gone, both parents were dead, and Arnold was supporting his sister, Hannah (three of his siblings having died before then). Arnold went into business; his money was earned.

People didn't know who would win the Revolutionary War. What side one was on was not simple. Motivations varied -- politics, family, beliefs. It's so easy to look back and to feel superior, knowing what "we" would have done, what is "right" based on who won and who lost. History should tell us not only what happened; but why; and even better when a book keeps us "in the moment."

We all know what Benedict Arnold did. A book that simply tells us those facts -- snore. But a book that takes those facts and impresses the reader with Arnold's actions before he changed sides; that creates sympathy with the worst type of betrayal -- a traitor!; that somehow makes us hope that it's not going to end the way it will; is exciting, vibrant, and makes it all seem like it is happening now. And that's why we read history; to learn not only what happened, but also why. And to see how we can apply what we learn to today's news and events. What is happening now in the world where a "right" decision isn't clear? And won't be clear for years?

The round-up for One Shot Recs Over the Fence is at Chasing Ray.

Huh. This sounds fascinating... the difference between what we learned about B. A. in school vs. him having a life and actually being a human being whose family loved him and who wasn't a weasel from the beginning is immense. Glad someone wrote a book!

I love Jim Murphy. Read something about him recently and thought, "someone should write a book about him."
As usual, folks are way ahead of me.

I'll be looking for this one - sounds fascinating, and I've liked some of Murphy's other work (particularly the Yellow Fever book).

I've read all four of these Jim Murphy books and learned so much from each one. Benedict was very enlightening for me. I knew him only as a traitor and this portrayal showed what a patriot he was for a long time and how dedicated to his troops and self-sacrificing. It was a fascinating biography. Thanks for giving it another blast of publicity.

My son is named Benedict, and my mother is unwilling to tell her friends...I had thought that when the Pope chose Benedict (a few years after my son was named) that the useage of the name would pick up in the US, but the prejudice against it seems to strong, and there seem to be no others.

We've told him about St. Benedict, and his love of books, but not about B. Arnold. So this looks like a book I'll be getting him to read in a few years, when he's ready to face the darkness....

I didn't realize Murphy had another one out so thanks for the heads-up. He always introduces me to the most fascinating tidbits in history.

I had to cut so much out of my review because I found myself just repeating some of the interesting things and motivations of Benedict Arnold, as well as the time period.

Charlotte, I went to St Benedicts Elementary School. So I always think of the Saint first! Hmm...I seem to remember some TV show or book with that name for the main character? I'll think about it.

I just picked this up tonight at the library thanks to your review. Can't wait to get started!

The men and women of the Revolutionary War were people with flaws and doubts, and even selfish motives, as are all of us. Knowing that makes their efforts to form a new country even more extraordinary, in my mind.