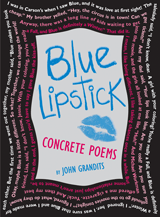 A sequel to Technically, It's Not My Fault: Concrete Poems

, which told trials and tribulations of Robert. Blue Lipstick is about Jessie, Robert's older teenage sister.

Jessie's life is full of typical teenage problems. BAD HAIR DAY is Jessie's botched attempt to dye her hair blue. When she finally confesses the disaster to her mother, expecting anger, she gets support: "Jessie, every woman makes the big, BIG hair mistake once in her life, and some women do it over and over. Tomorrow when you go to school, just hold your head high and say, "This is the way I planned it." This poem is a concrete poem, like every one in the book -- the sentences are pieces of hair, half short and bleached white, half blue and wild, just like the hair disaster itself.

This is one of those books that is of interest to teens; but it also good for younger kids, who may be interested in reading about high school, boys, volley ball practice, and the other day to day realities and concerns for teens. Plus, the brother-sister relationship is well portrayed, equal parts frustration and annoyance and love.

What a great synopsis to find on a day when I absolutely need to go about telling myself that "I planned this."

I have a new haircut this week and I thing it turned out the way I planned it... Now I am contemplating whethere to change the color or just let it be. One can never get too much wisdom about these things. This book sounds like a great one - thanks for posting!