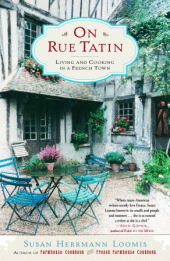 On Rue Tatin: Living and Cooking in a French Town

On Rue Tatin spans almost 20 years, beginning with Susan Hermann Loomis going to Paris to apprentice at a cooking school; and ending years later, with Loomis and her family having made France their home.

This memoir with recipes reads like a novel: she meets her husband on a summer trip home; he moves to France with her; both return to America to pursue careers (he is a sculptor; she is a food writer); years later, they and their toddler son return to France while she takes a year to research and write French Farmhouse Cookbook

Instead of finding a simple bungalow to rent, Loomis and her husband find an ancient home. With the support of the friends they made years before, they buy the house and begin remodeling. Like Under the Tuscan Sun

, this is a book that mixes a life story with renovations and recipes; Loomis and her husband bring not only their house to life, but also their family.

I read books like On Rue Tatin like fantasy; the stories of shopping in foreign countries, the tribulations of renovating homes that are hundreds of years old, the food, are all breathtaking and enticing. For a moment, I think, hey, I can do that! And the recipes are there, to make it seem somehow less fantastic. Hey, I could make that!

Loomis has smartly capitalized on the feelings I have; she runs a her cooking school out of her renovated home, and for half a minute I thought, hmm, why not? Then I remember : oh yeah, that costs money. Realistically speaking, I also know that my love affair with food is eating it. Not making it. But oh, a cooking school like that, I think...going someplace like that would make all the difference, wouldn't it?

For those of us who can only dream of traveling for the cooking school, Loomis has put out more cookbooks, including Cooking at Home on Rue Tatin

. Which I haven't read. I did tell you I read this more as fantasy, right? (Tho maybe this will be the year I actually start cooking like this....)

My interest in this book came from the New York Times article that highlighted Loomis' now renovated home: In France, a Labyrinth of a House. It's as fabulous looking as the book describes.

If you have any suggestions for other books like this (travel, renovation, recipes), let me know!

I shall close my eyes for a moment and likewise fantasize.

This book looks great. It coincides perfectly with the MFK Ficher essays I've been devouring recently.

This week Bonbon features how to raise a reader.

http://www.bonbonliving.com
sweetest living for your family

This has been on my "books I want to read" list for ages. I really ought to get around to reading it already.