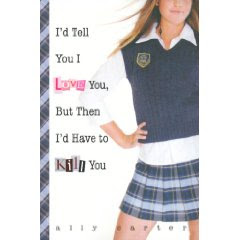 I'd Tell You I Love You, But Then I'd Have to Kill You

Cammie Morgan has your typical teen problems: conflicts with some girls at her school. It doesn’t help that her Mom's the headmistress. There's a tough new class she has to pass, taught by someone who is a little too friendly with her widowed mother. And there's the townie she just met, Josh; if he knew she went to the exclusive boarding school, The Gallagher Academy for Exceptional Young Women, he'd think she's just another spoiled rich girl and wouldn't give her the time of day.

But there's one something Joss doesn't know. Gallagher Academy is a special school… for spies. Not only that; Cammie's a legacy, daughter of a "Gallagher girl," with a lot to live up to. These girls aren't being taught to be the business people and world leaders of tomorrow; they're being taught to be the super spies who will be conducting corporate espionage and saving the lives of world leaders.

Strap yourself in for a fun, action picked adventure, as Cammie tries to pass covert-ops while keeping her spy school a secret from the typical and normal (and did I mention handsome?) Josh.

. Just as with Buffy, with the well known metaphor that High School is Hell, here the metaphor is that life is like spy school: there is a part of all our lives that we are trying to hide. How much do we reveal to those we love?

But it's not always that serious. Cammie juggles her talent and drive to succeed with her dream of a normal life, one where fathers don’t disappear during top secret missions. She wants to be loved and accepted for who she is; but she's afraid to tell the truth about herself to Josh, or to tell her mother the truth about Josh.

Carter's spy school is over the top, believable, and fun, with its secret passageways, weapons stash and chemical labs. The Gallagher Girls are the unknown heroes, speaking a dozen languages, with enough gadgets to make James Bond jealous.

I especially loved the little bits of Gallagher Girl history that crop up here and there: from the school founder, Gillian Gallagher, who saved President Lincoln from the first assassination attempt (the one you don't read about) to the revelation that duct tape was invented by a Gallagher Girl. If you want to apply, you need Level Four clearance.

This originally appeared at The Edge of the Forest in March, 2006.

I thought this was a really cute book. I'm looking forward to Don't judge a girl by her cover in June.