Crash Into Me Press Release 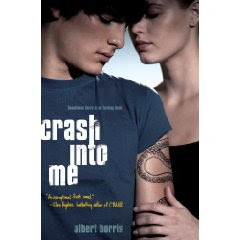 I read Crash Into Me as part of MotherReader's 48 Hour Challenge; a full review is coming in July.

The Class of 2k9 sent me the ARC, along with the following Press Release. (Disclaimer: I edited this so that the URLs weren't being shown but were embedded in the text.)

Debut YA novelist Albert Borris has a way with words.

Or rather, had a way with words.

This past December, just months before the release of CRASH INTO ME (Simon Pulse), Albert suffered a stroke so powerful, his doctors told him he was lucky to be alive.

And alive he is, having made a full physical recovery, enough to roughhouse with his two young sons and work out at the gym. However, Albert is still working on recovering something else: his words.

To be sure, they are all up there in his brilliant mind. He just can’t get them out – verbally or on paper – in the correct order, yet. But he’s working on it.

Prior to his stroke, Albert was a full time teen counselor, husband and father. He also served as Co-President of The Class of 2k9, a group of 22 debut middle grade and young adult novelists banding together to promote their books. Words were his thing. Communicating with others, in person and on the page, was his specialty.

As his friends and fellow debut novelists, we, the Class of 2k9, are making it our business to get the word out about Albert and his novel, CRASH INTO ME. Here's a bit about it:

When Owen, Frank, Audrey, and Jin-Ae meet online after each attempts suicide and fails, the four teens mak e a deadly pact: they will escape together on a summer road trip to visit the sites of celebrity suicides...and at their final destination, they will all end their lives. As they drive cross-country, bonding over their dark impulses, sharing their deepest secrets and desires, living it up, hooking up, and becoming true friends, each must decide whether life is worth living--or if there's no turning back.

Won’t you join us in spreading the word?

Pass this on to every librarian, teacher, and teen reader you know.

Anything you can think of to show your support would be deeply appreciated.

Email ThisBlogThis!Share to TwitterShare to FacebookShare to Pinterest
Labels: press release, YA

Thank you so much for this information! I'll pass the word.

Best of luck to the author for a full recovery!!

Margie & I are holding a contest for this book & swag in two weeks. I'll keep you posted. As a teacher, I am so impressed with motivation for writing this book.

For the next few weeks we at 2K9 are running interviews with Albert's publicist, agent, and editor in order to get the word out about Crash Into Me. Take a look here: http://community.livejournal.com/classof2k9