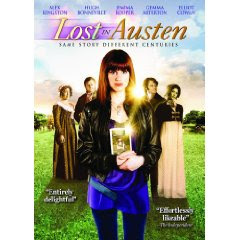 The Plot: Amanda Price is a modern girl whose favorite book is Pride and Prejudice

. Modern day life and love pale in comparison to Austen's world. Until a door opens and Elizabeth Bennet finds her way into Amanda's world; and Amanda finds herself in Elizabeth's home.

The Good: Imagine being in your favorite book. Meeting the characters, wearing the clothes. Sounds great, doesn't it?

It's actually the basis of many a Mary Sue story. Living with those people! Making sure the right things happen! Being part of a story!

Except, adding something new doesn't make things right. It can make it worse. So. much. worse. Amanda is no Mary Sue; everything she tries goes wrong. See, the first problem is Amanda arrives at the beginning of the book. Which means Elizabeth isn't there to help Jane with Mr. Bingley or to meet Darcy. It's up to Amanda! Who knows everything. And messes it all up royally.

Part of why Amanda messes it up is because she knows the end of the story. And instead of letting things happen on their own, she's giving spoilers (which aren't understood) and pushing people together well before they want to be together.

I laughed; I cringed at Amanda's missteps; and I cheered when things finally worked out. And I especially liked how this wasn't exactly Austen's world and people. We see a fuller world; a different perspective; and it's a hell of a lot of fun.

Those who watched via DVD and in America. Apparently, the rights to a certain song were not fully obtained. Which means the following scene does not appear on the DVD. Enjoy, Lost in Austen lovers. The setting: Amanda, trying to fit into the past/book world, gets put on the spot and has to sing.

Thanks to Monica for the recommendation.

Despite my terror of movies about people in cringingly embarrassing situations, I bumped this one to the top of my Netflix queue.

Yes, I think this just got added and bumped to the top of my Netflix as well!

Lol. That was hilarious. Must see this.

I was so embarrased for Amanda so many times -- watching with eyes shut, or lowering the volume on the tv.

Thanks, Liz. I just added this one to my NetFlix queue (#3, after I finish Season 2 of The Wire - should be quite a change).

This was on TV recently. The BBC, or one of the indie channels I think, and I watched what I could. I wanted to rewind the Water Scene. I don't want to spoil it for anyone else that hasn't seen it. But if/when you do, you'll know what I'm talking about. I'm pretty sure I reacted the same way Amanda did...and thinking "Geez, that must've been cold!"

Ooh I loved this show! It was sooo cute! Wish they would carry in on with a diffrent book like Ema or Persuasion or something. :)

See, I would not have known about the missing song. Thank you.

SOUTH AFRICA - I'm an Austen Addict! Watched it in Jan, then they repeated the series a couple of weeks ago and I was reminded by a wet Darcy why I loved it so much. Ordered the DVD and it arrived on Friday, my family going crazy that, this is all I watch - having a tshirt made - I LOVE (heart) DARCY!! Thank you for a lovely blog

This is too funny. Thanks for leaving the URL on my review post. I edited my post to alert my readers to come here to see the clip.

Greetings from California!! Just to let you all know, Netflix now has this movie for Instant play, so you can now watch it on your computer instead of waiting for it in the mail! :) Enjoy!